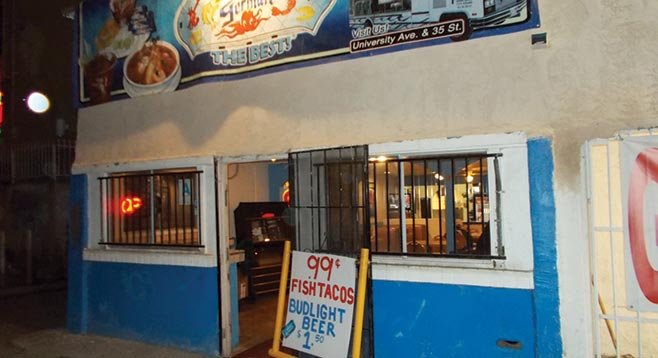 Oh, man. Trolley’s crowded tonight. ’Course, Friday night, Blue Line, heading south, what else would you expect? Especially this front car. Everybody’s packed in here so they can get out closest to the line in San Ysidro. About now, everybody, standing and sitting, has been rocking along for half an hour. They look exhausted from the week; half are asleep or heads down working their phones. The other half are all yapping and excited about the weekend. There are even some American kids heading for Revolución and the bars their dads told them about. Haven’t seen that in a while.

Me, I’m getting out two stops short, here at Palm Avenue, inland from IB, so I can connect with the 933 bus. I work my way out among strollers and moms and their little kids sitting on the doorsteps. In the end, you get squeezed out like a pip from an orange.

The trolley rumbles off, and then there’s this kind of silence. People are hurrying off the platform, shadows in the gloom, to where Hollister and Palm cross. Dang. See a 933 taking off, headed toward the coast. That means half an hour till the next. 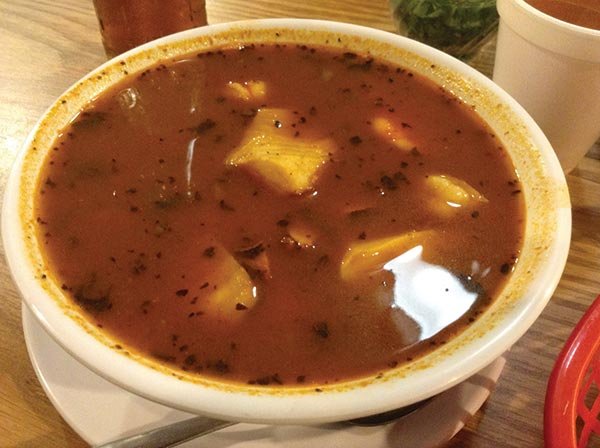 I have to cross Hollister to hear better. Turns out they’re singing “Flor de Capomo,” about the little purple flower of this huge breadnut (“Capomo”) tree they have down south, and the gal they’re romancing. And seems the original words aren’t Spanish. They’re Yaqui Indian.

Right now, this pit stop on the Blue Line is starting to feel more like Mexico than Mexico.

I notice a big hand-painted sign parked out on the road, so cars can see: “99¢ FISH TACOS.”

It’s a little eatery next door, Mariscos Germán. Blue-and-white frontage with bars across the windows and another sign planted by the door: “99¢ Fish tacos, Bud Light Beer, $1.50.”

Well, now. That’s an offer no value-conscious boy can refuse. A beer and a taco, $2.50? So, I leave the guys still singing, “Tú mi chiquitita/ Finge no mirarme...” (“You, my little girl, pretending not to see me...”), and head into this low-ceilinged eatery with blue arches, cream walls, and brown booth tables. I sit down at one of them. Everybody here’s glued to the TV. Two women are actually chasing each other around a courtroom, flailing, shouting, pulling hair. The judge is hammering hopelessly with her gavel. 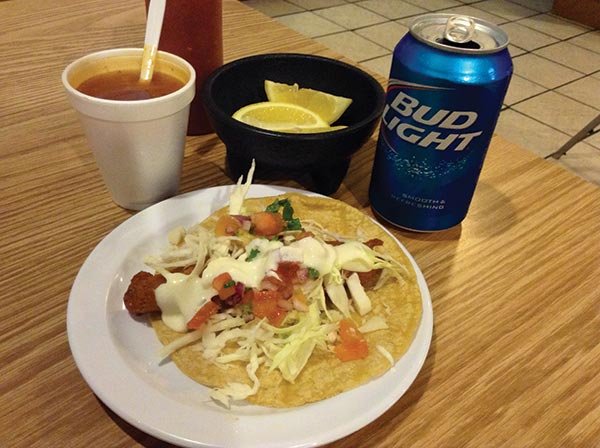 “It’s the Mexican Judge Judy,” says the guy at the next table.

But now a real gal, Ana-Maria, comes up. And, tonight, none of my usual bumbling about what to eat. “The 99-cent fish taco,” I say, “and the buck-fifty beer.”

And, guess what? First up, you get a little polystyrene cup of steaming fish soup, with onions and tomato and shredded cabbage, free, as an appetizer. Then comes the can of Bud Light, and finally the taco. And not mini. A nice size, and holding a long fillet of deep-fried, battered fish, with a kind of creamy mayo sauce, cabbage shreds, tomatoes, and cilantro. I squeeze one of the slices of lemon over it, add some house hot sauce, roll it up, and have at it. Great! I triangulate between the fish soup, the taco, and the cerveza, totally geeked on the fact that this meal is costing less than a cup of coffee in the Gaslamp. What happy hour can match that?

The fish in my taco is fresh and the batter’s golden and wickedly crunchy. What I like is they didn’t skimp on this bargain taco. It came bulging with generosity.

Outside, the boys are still singing and playing amid the tires.

So, that was last week. This week I’m back and willing to look at the actual menu in here. Because Ana-Maria told me this place used to be called “Siete Mares” (“Seven Seas”) and that they have kept on with the caldo exactly as this place’s signature soup always was. The older lady, Demecia (I think she says her name is), says it’s a great way to boost your system, and it’s filled with shrimp, clams , octopus, squid, fish like marlin, the works.

But I choose Siete Mares soup for $9. Could have had a larger size. Just as well I didn’t. Because my “small” bowl is filling. Too filling. I can’t handle the whole thing. Have to leave some delicious clams and octopus. (I also get a Mexican apple-juice drink for $1.75 and a carne asada burrito for Carla. Costs $4.75.)

All good stuff, especially the soup. But after the first visit, the fish taco and a beer for two buckeroos and change, nothing — not even the Seven Seas soup — can match the feel of that real meal deal. I’ll be back. Besides, I want to hear more of that music from the tire boys next door anyway.