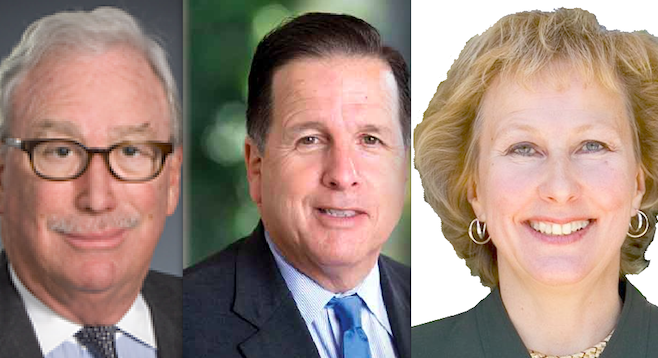 San Diego attorney Mike Aguirre today (March 18) held a press conference to denounce the California Public Utilities Commission (CPUC) for denying him intervenor fees in his recent battle against San Diego Gas & Electric's attempt to get ratepayers to cover the company's uninsured costs of the 2007 fires. A CPUC unit has held the San Diego utility responsible for those fires.

As reported here March 6, Aguirre had requested intervenor fees of $224,545 as costs of his work on the case. As Aguirre pointed out today, the CPUC's conflicts of interest are legion. The administrative law judge on the case, Maribeth Bushey, who continuallly interrupted and harassed Aguirre during the hearing, is a former employee of SDG&E. The head of the CPUC is Mike Peevey, former president of Southern California Edison.

Critically, in December of 2012, SDG&E, with the help of a friendly CPUC commissioner, tried to pull an outrageous scam. The subject at hand was supposed to be indemnification for future insurance costs. But the CPUC quietly — at the last minute — slipped in a change in former commissioner Timothy Alan Simon's opinion. The focus was no longer on future insurance costs. Suddenly, SDG&E wanted a bundle of money for the 2007 costs — which was not the subject of the discussion. Aguirre caught that and ended it.

The CPUC got its revenge by denying Aguirre any intervenor fees. In this week's rebuttal, Aguirre lashed the corrupt regulator's modus operandi: "favoritism and reward for conformity, compounded by retaliation for zealous advocacy."

This proves once again that the CPUC is the most corrupt public agency in America, and is the greatest threat there is to California ratepayers and economy because of their criminally negligent actions with SONGS that also threatened public safety. When is Brown going to clean up this corrupt agency before they bankrupt California?

Anon92107. It is up to Gov. Brown to clean up the stench. It will remain there as long as Peevey is there, and as long as business is conducted in secret and in code. The public has to understand how it is getting raped by the CPUC's singular focus on utility profits. Best, Don Bauder

If every SDGE ratepayer would dig up $2 and send it to Mike, he'd have his fees (and then some.) Grassroots action to get him paid would also shock the CPUC--and also the governor--and might be the start of action to have the CPUC act as a regulator, and not an enabler of every utility rip-off scheme.

Visduh: That is a good idea, if it is legal. As you point out, there HAS to be grassroots action to get rid of corrupt commissioners as well as biased and corrupt administrative law judges and bureaucrats. Best, Don Bauder

Those token payments would be gifts, and very small ones at that. I can't think of any reason they would be illegal.

Visduh: Such gifts would probably not be illegal, but a lawyer should rule on it first. There are tight guidelines on paying lawyers. Best, Don Bauder

Visduh's support of Aguirre (anybody's support of San Diego's knight/whipping boy) is laudable but it would be a shame to let the utilities' stock holders off the hook, especially if he gets fewer two-dolllars than he got votes. Whatever else you say about the man, he's inversely appreciated by those he benefits. Those in power fear him like a devil, and use their power to turn our low information populace against him. More to the point, the "intervenor fee" is a perverse concept that UCAN proved to be a setup for stinky deals. How do you watch the people who are supposed to be watching for the people? Would it help to reduce the layers of corruption by just having the public utilities be public? Maybe we should go back to go forward.

You are right about intervenor fees. The abuse of them by Michael Shames, former head of UCAN, alerted some in the legislature to the misuse of these fees -- by both the intervenors and the CPUC. But eliminating them is not an answer, either, because who would step up to fight the utilities' rape of ratepayers? Maybe there could be intervenor fees with a third party, not at all under the CPUC, deciding who gets and who doesn't get intervenor fees.

Murphyjunk: The CPUC is accustomed to flushing down critics who won't crawl back and fight. That is not the case with Mike Aguirre. This won't end until some big people are hurt, and I predict it won't be Aguirre. Best, Don Bauder

Can't we just admit that the privatization of public utilities was a huge give-away? The public maps the rate-payors exactly; they are the same entities no matter how you slice them. Together they make an amorphous mass that will never come to a sharp enough point to deal with a profit-motivated entity. And why should a group of stockholders profit on the entire populous, with serious consequences for the environment? That sounds like what the government is supposed to do, less the profit.

rehftmann: I don't have a problem with privately-owned, profit-making utilities if the regulators make sure that the interests of ratepayers come before the interests of shareholders. That is not now the case in California. Best, Don Bauder