At the house of frog tacos 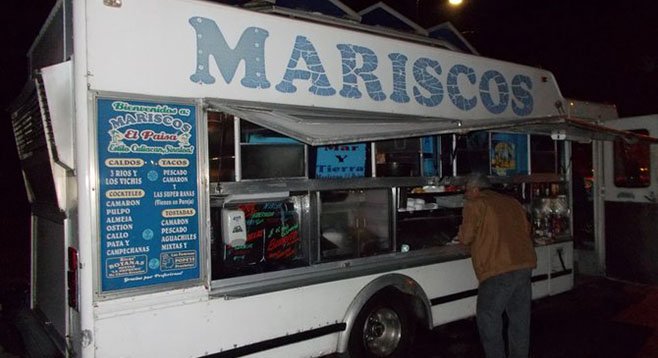 You notice it as you come in on the Blue Line: The pool of light. The clump of customers. The mariscos (seafood) food truck. Everybody's standing around, heads forward, chowing down. Lotta customers: good sign.

So I hop off at the stop right past it, Iris Avenue, and hurry back across Iris to the parking lot outside Liva Abarrotes y Carnes warehouse to see if they're still serving. Because we're way past seven, they officially close at six, and already I see guys cleaning up, emptying the garbage pails. 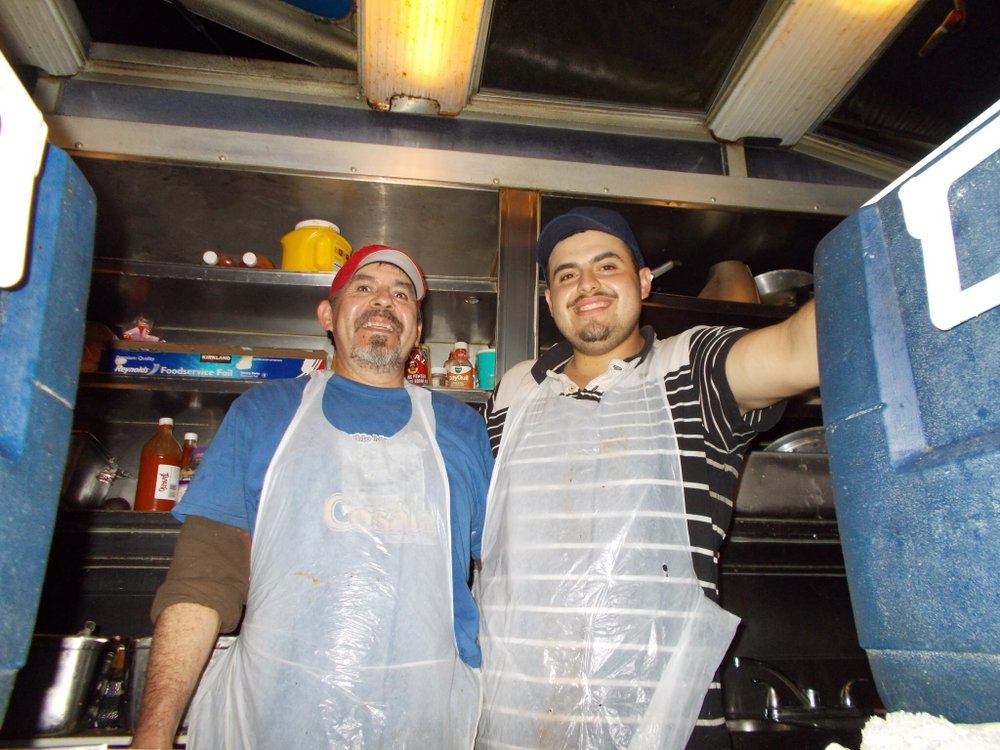 "You still open?" I say through the little window.

That's when I recognize him. The dad. Salomon. Salomon Cebreros.

I don't remember his last name till I see it written on the side of the truck. But I recognize his cheery face. And then I remember another thing. There it is on the truckside menu. Ranas. Oh yeah. Frogs! I was here before. Had frog tacos last time. Man, so surprisingly delish. 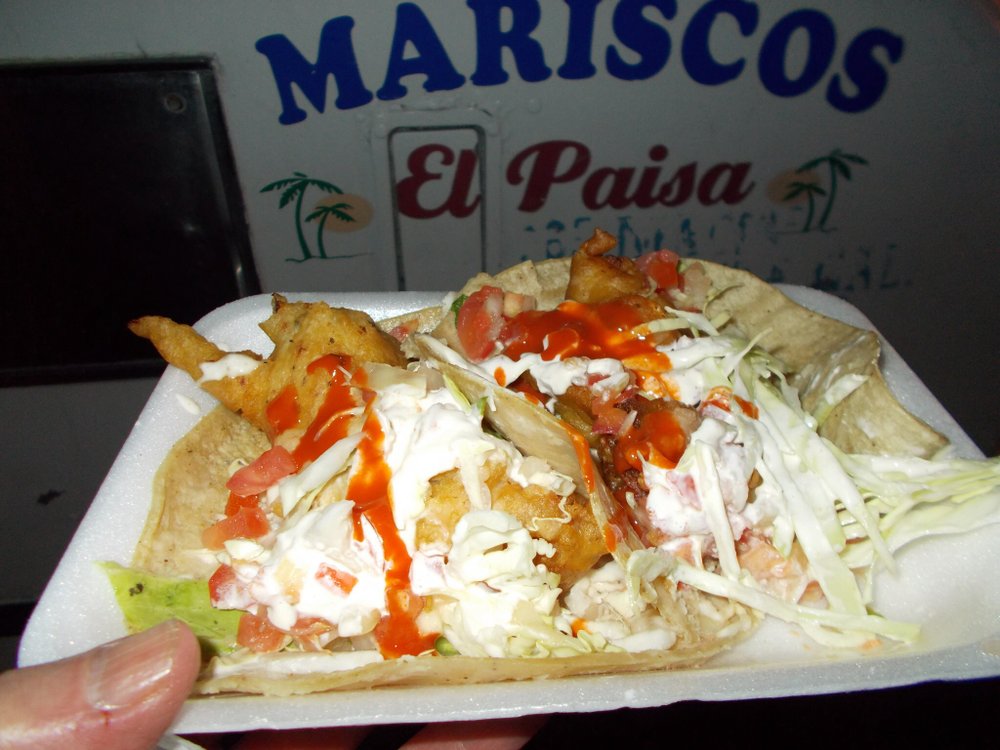 Salomon greets me like an old friend. Can't believe he remembers me. Maybe it was the big deal I made about the frogs last time. These guys are from Culiacán (the capital of Sinaloa, famous for its cooks). And yes, those ranas: Tasty, squidgy, like a cross between chicken and alligator.

Except right now I'm in fish mode. Had a delicious fish taco up the line at Palomar the other night (Mariscos Germán — see this week's Tin Fork). Here, their basic fish taco is $1.25. Shrimp's $1.50. 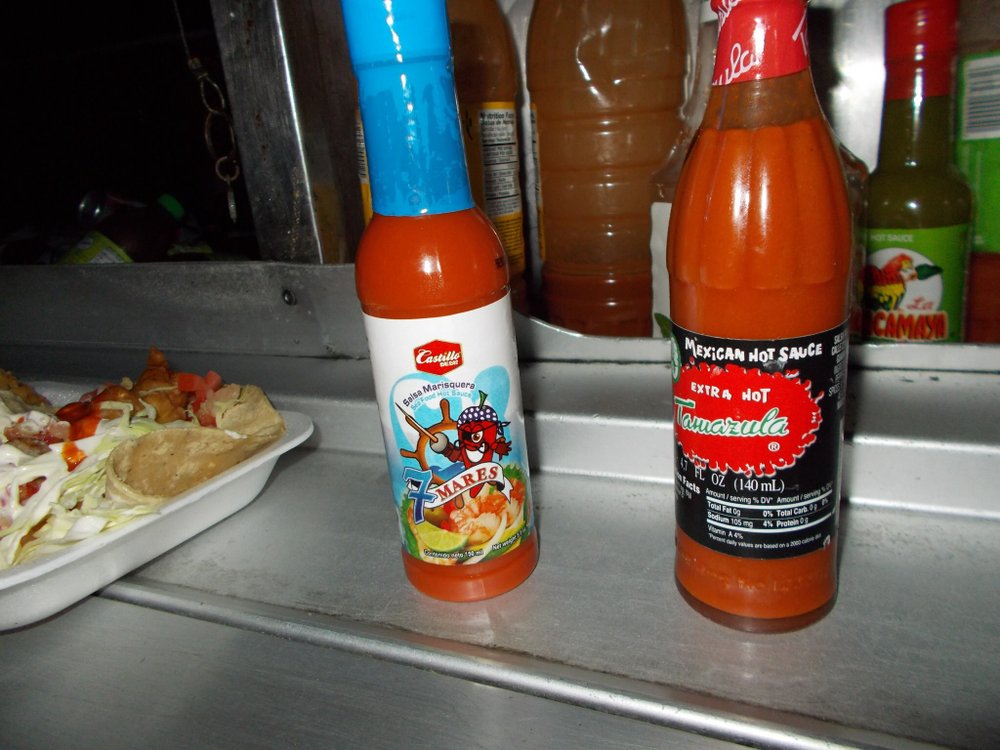 Sal and Salomon Jr (Eric) and his brother Eddie run this place. It has always been a family thing.

I almost go for the Caldo — soup — Tres Rios y Los Vichis, a play on "Siete Mares," I think, except only three fishes involved here. And also right now, it's a question of time, money, them closing...so I pass up the caldos and the cockteles, and ask for a fish taco and a shrimp taco.

They have so many hot sauces. I go for Castillo 7 Mares for the fish, and Tamazula Extra Hot for the shrimp. They're both, well, extra hot.

Of course, nowhere to sit. Let's all thank the City health authorities for that. Somehow the City figures making us stand up when we eat is healthier for the community. Go figure.

Whoa! Thats why all these wonderful places have removed their chairs and tables? Have you gotten a reason as to why they're not up to health and safety standards? This truck and the one right next to it are right by my house. The regular taco truck stays open 'till the Blue Line stops!! However, I wasn't aware they served frog tacos at the Mariscos truck. Guess where I'm going for lunch. Thanks Ed!

Hey Fat Cat: No. Keep meaning to call the health people and find out, specially seeing it was okay forever before, and nobody seemed to keel over. And I don't think they ordered the tables gone because El Paisa had broken health rules, just that they might. Enjoy the ranas! -Ed