As new fee imposed, university exec gets a raise

UCSD to California State University transfer pays off for administrator 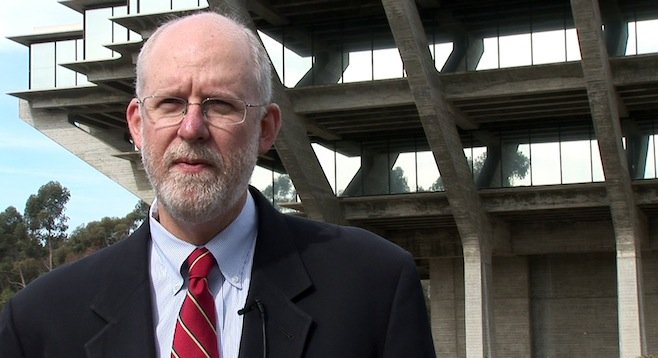 While SDSU prepares to levy its new $200-per-semester "student success fee," yet another highly paid university administrator from San Diego is going on to even bigger money at the California State University system's headquarters in Long Beach.

This time it's Steve Relyea, a 27-year veteran of UCSD, where he has most recently been vice chancellor for business affairs. In 2012 Relyea received gross pay of $303,915, according to numbers posted online by the University of California.

Next week, California State University trustees are set to vote on Relyea's appointment as that system's executive vice chancellor and chief financial officer, with an annual salary of $310,000, along with a $1000 monthly car allowance and a temporary housing allowance of $2750 a month for half a year, according to the meeting agenda.

In addition, the agenda lists three other monetary goodies Releya will get, but doesn't detail their amounts. They include: "Standard benefit provisions afforded CSU Executive classification employees," "a transition program for university executives provided he meets the eligibility requirements," and "reimbursement for actual, necessary and reasonable moving and relocation expenses."

Though the trustees haven’t yet approved the appointment, UCSD is treating it as a done deal.

In a March 12 announcement of Relyea's departure, chancellor Pradeep Khosla invited academics and staff to an "all-campus farewell reception" at the faculty club on April 16.

His leadership in performance metrics resulted in UC San Diego being the first university in the U.S. to implement the Balanced Scorecard program developed at the Harvard Business School and used by many Fortune 500 companies today.

Thanks to Steve’s guidance, UC San Diego became the first university in the world to be inducted into the Balanced Scorecard Hall of Fame.

Relyea's immediate predecessor at the California State University system is fellow San Diegan Sally Roush, a longtime San Diego State University administrator who was at the center of many of that school's athletic scandals.

As previously reported here in December, the controversial Roush, who was paid $301,957 in 2012 as vice president of business and financial affairs at San Diego State University, retired from that position last June and was subsequently retained by the state university system as the interim replacement for departing CSU chief financial officer Benjamin F. Quillian.

In addition to her full SDSU pension, the double-dipping Roush is currently receiving a pro-rata annual salary of $270,000 as CSU's interim vice chancellor for business and finance, according to minutes of the university’s trustees meeting and a university system spokesman. She's also getting a $1000 monthly car allowance.

A similar plan at Sonoma State was shelved by the university last week following objections there.

Wouldn't it be GREAT if Steve and his other overcompensated compadres at these State institutions would just take pride in doing a great job and serving the California Academic Community and the educational future of our country instead of demanding a ridiculously high salary and benefit bag of dough to assuage their egos and ratchet up the bloated salaries of educational administrations across the nation?

"the Balanced Scorecard Hall of Fame."

Is that a joke? There really is a Balanced Scorecard Hall of Fame? OK - that's it. I'm putting on my tin-foil hat and going down to live in my bunker. The world has now officially gone insane.

Wikipedia has a very long explanation of Balanced Scorecard, which gave me a headache just skimming through it. Here's just one sentence: As a model of performance, the balanced scorecard is effective in that "it articulates the links between leading inputs (human and physical), processes, and lagging outcomes and focuses on the importance of managing these components to achieve the organization's strategic priorities." O....................K! Sounds simple enough.

No, ImJustABill, the "Balanced Scorecard Hall of Fame" is not a joke. It's yet another corporate world application coming out of the corporate world's favorite institution, Harvard University, and being applied to such disparate endeavors as Government and Education.

As the nation's pre-eminent university, Harvard should be ashamed to promote such hogwash, but it is always in high fund-raising gear and so benefits from private corporate largesse. See the recent New York Times story about privatized funding of scientific research.

Just curious, What EXACTLY is it that they do which makes them worth these salaries (&gt;5X average household income of those they server)? I just want to know so that I can pick the right major and get into that carrier field.