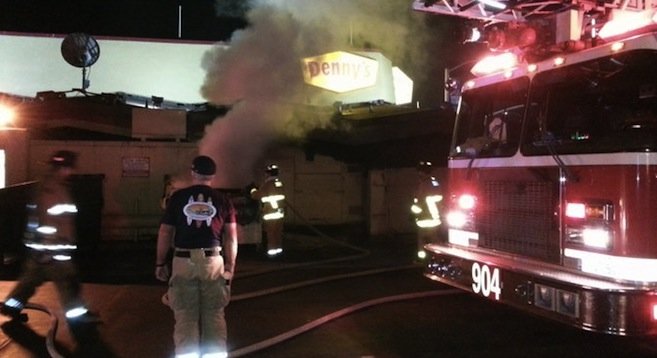 The flames were shooting above the roof of the restaurant as crews from San Diego Fire-Rescue responded to a reported fire in the Denny’s parking lot at 10:32 p.m. on the evening of Saturday, March 15.

Two engines from the nearby Pacific Beach station arrived right away at the scene of the blaze on the corner of Mission Boulevard and Garnet Avenue.

Quick action taken by two sailors from the 32nd Street Naval Station, who happened to be passing by, helped end the fire before the building went up in flames. 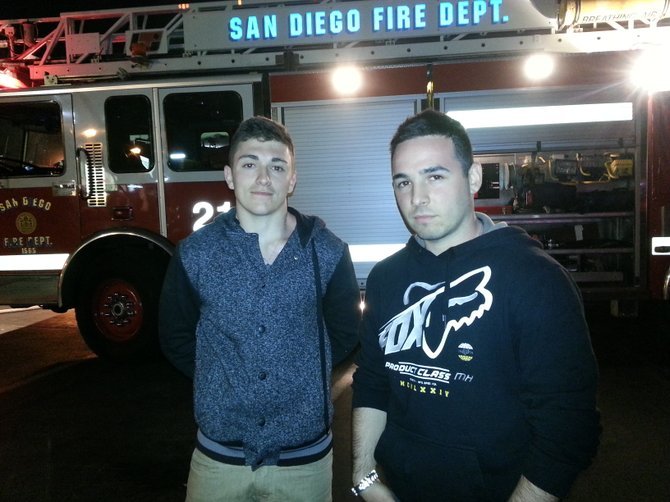 According to Nicholas Zeitler, he and fellow aviation ordnanceman (A.O.) Spryodon Katechis were “passing through the parking lot and saw the flames start to shoot out from both dumpsters. We’ve been trained for things like this. When we looked around and saw no one was doing anything, we started banging on the back door [of the restaurant].

“When it opened, we grabbed fire extinguishers and started putting out the fires. Then the fire engines came.”

Nicholas pointed to a singed area on his hand as a reminder of he and his friend’s valiant actions before they headed on their way along Mission Boulevard.

Fire department crews extinguished the flames completely within minutes after their arrival. Other than Zeitler, no one else was injured. The cause of the fire is unknown.