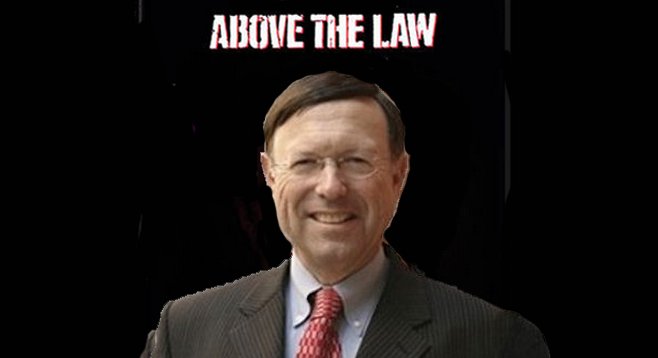 According to attorneys for Goldsmith, public officials such as the city attorney are not subject to California's Public Records Act. The law, reads the brief, requires only "local agencies,” a "city,” or a "municipal corporation" to turn over documents, not individuals, officials, or employees.

The claim is the most recent in what has become a battle over government accountability and transparency in San Diego.

Within the past year, the City of San Diego has been named in several lawsuits for failing to abide by the public records act. Goldsmith, in particular, has been named in two lawsuits, one of which for releasing closed-session transcripts to the U-T San Diego during his feud with former mayor Bob Filner while refusing to release other closed-session transcripts to other members of the media. The second lawsuit, both filed by San Diegans for Open Government, challenges Goldsmith's refusal to make public his correspondence from his private email account — through which he discusses city business — to reporters.

Last week, council members voted against placing a ballot measure aimed at improving access to local government and granting access to emails from elected officials. According to those involved, the city attorney's office resisted the measure off the bat.

"From the start of the discussion about the proposed amendments to the city charter, the city attorney raised questions but did not offer much in the way of solutions," councilmember and proponent of the measure David Alvarez stated in a comment for an upcoming cover story on the ballot measure and Goldsmith's public records policy. "Two of the three reports written by the city attorney were either released the day before or the day of a public hearing where the proposal was discussed, which allowed little to no time to address their ever evolving concerns, which I think was by design."

More recently, the city, under the direction of then-interim mayor Todd Gloria, and with the city attorney's blessing, under the guise of saving money, issued a memo stating that the city planned to delete all year-old emails from city servers. New mayor Kevin Faulconer put that policy on hold for the time being.

The flap over public officials using private email accounts has been brewing throughout the state. In March 2013, Santa Clara County judge James Kleinberg ordered that the City of San Jose must turn over all emails and text messages, whether or not they were from a private account. That decision is now under appeal and is making its way through the courts.

Goldsmith is fighting an uphill battle in the case. Emails from his private Yahoo! account were released in a prior public records request submitted by *The Reader*.

Those emails show that U-T reporters had a direct line to the city attorney, with access to him at all hours on his private and public account. Yet, despite the previous release of emails and despite the March 2013 court ruling, the city attorney's office has decided to spend taxpayer dollars to fight the lawsuit.

"[A]lthough there is a strong policy favoring disclosure of public records, the public's right to information is not absolute," reads the February 27 legal brief. "As a threshold matter, the Act requires that the requested records sought be from a state or local agency. The requested records must also be prepared, owned, used, or retained by that agency and contain information relating to the conduct of the public's business."

Attorneys from the city go on to say that Goldsmith's job as city attorney is not to "conduct City Business" but instead is to act "as the City's lawyer as stated in the title. To allege the City Attorney is using his private emails account to 'conduct official business of the City' is nonsensical..."

The claim shows the time and effort that Goldsmith put in during his public feud with Bob Filner. For much of 2013, it wasn't a surprise to hear Goldsmith holding press conferences during business hours or writing op-eds for the *U-T. In fact, he wasn't shy about his role, telling the Los Angeles Times that he was one of the key players in Filner's "de facto impeachment" — online news organization Voice of San Diego* covered the claim extensively.

The claim that Goldsmith is not subject to the California Public Records Act isn't taken lightly by open-government advocates such as public-records attorney Kelly Aviles.

"The City is an entity," writes Aviles in a March 6 email. The 'City' as a local agency cannot send an email. It can only act by and through its agents, employees, and officials, including the City Attorney. When the City Attorney has an email exchange about issues facing the city, those records are unquestionably public. Further, depending on the kind of information the City Attorney disclosed, it may very well shed light on issues of great public importance, namely whether he breached his ethical obligations."

Kevin Faulconer also stands by the public's right to access, though stopped short on confirming whether public officials were directly subject to the law.

"The California Public Records Act defines records as ‘all communications related to public business.’ If a message related to public business is created using a government cell phone or computer, it is presumed to be subject to public disclosure," responded Faulconer's spokesperson Matt Awbrey. "Regarding private emails, we are encouraging staff to use official email and devices for all city business. When public matters are received on private email accounts, city staffers should reply with, 'Please email me at ([email protected]) on issues related to City business.'”

City Attorney Jan Goldsmith is a wily right-wing former Assemblyman and judge. He doesn't believe the public has a right to know anything via a free press and he fights tooth and nail to maintain his self-styled "privacy,"even as an elected official. I don't know if there are term limits on the City Attorney, but voters should get rid of Goldsmith at the next opportunity. Hyper-partisan Jan Goldsmith disgraces his profession and his office.

Doing a little homework on the San Diego City Clerk webpage, I see that in 1992, when term limits were passed, the city attorney is indeed one of the offices covered under a term limit restriction.

Thank you, aardvark. This is one instance where we can be grateful for term limits.

Goldsmith and his ridiculous hairpiece are a blight on San Diego. He is an arrogant warlord who thrives on conflict instead of resolution.

Mr. Goldsmith - perhaps you have lost sight of the obvious 'we pay your salary'. You want privacy - email personal business on a personal email account. If your conversations relate to City business on ANY email account - we have the right to see it.

Mr. Goldsmith's abuse of public office is a pattern of flagrant disregard of the law, jeopardizing San Diegans throughout the county. Read more at WeightierMatter: http://wp.me/p4aG7J-GM.

Jan Goldsmith and his accomplices in the city attorney's office make their livings out of defaming people with frivolous lawsuits, hiding or providing legal protection for a variety of government scams, and defending criminals in government.

Goldsmith indeed has a lot to hide.