An interview with Stephanie Blythe, mezzo-soprano (1 of 3)

A conversation about weather, travel and art 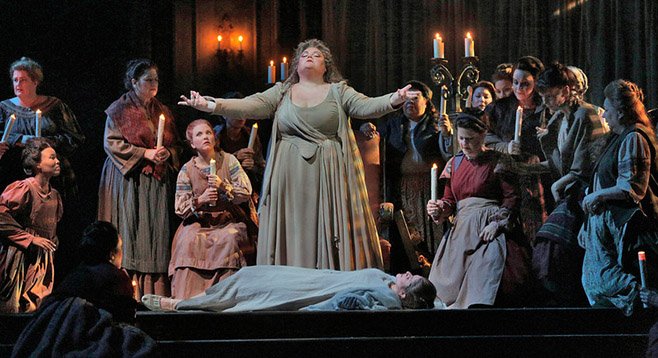 We started our conversation with some small talk about the weather and Girl Scout cookies.

Stephanie Blythe: I spent a week in Rancho Mirage before we came here. Oh my god, I couldn't believe it. For a girl from the Northeast — I mean I am so Northeast it isn’t true — boy this has really been nice. I could get used to it.

I read a news report from Sky news talking about this wall of weather that’s about to hit the Midwest and the Northeast and how this outrageous storm is going to affect hundreds of millions of people and it’s going to bring 3 to 6 inches of snow. When on Earth did every weather report become apocalyptic? I don’t understand. And then we wonder why we are such a litigious society. Why we are so unbelievably worked up on either side of the aisle — of the political spectrum — because the media is always in a frickin’ frenzy...well anyway, it’s not that shattering. I guess that’s how life is now. It’s a 24-hour news cycle.

Girl Scout cookie-flavored creamer is brought into the room for Stephanie’s coffee.

SB: It’s that time of year, isn’t it? Girl Scout cookies are everywhere. Anyone who is smart enough to park a Girl Scout cookie stand in front of a marijuana dispensary is a genius. That was a story from our 24-hour news cycle.

San Diego Reader: We know what you sing, what you can sing, but what do you secretly want to sing? Is there a "Kathleen Farrell singing Bach"-type thing hidden somewhere?

SB: I do sing Bach. I started out wanting to be a musical theater singer. Then I realized I wanted to sing opera and I started out thinking that I was going to be a Verdi singer. You know, I had this really loud voice, I was going to sing Verdi and Wagner. When I was in college that was all I listened to. I sang Strida la Vampa [from Il Trovatore] and Mon coeur s'ouvre a ta voix [from Samson et Dalila] for a concerto competition. It was crazy.

However, the reason I won the Met Competition in ‘94 was because I sang a Handel aria. It was far, far from perfect but it gave an inkling on what I might be able to do and I sang more Handel, Bach, and Rossini starting out for the first 10 years of my career than I ever thought I would. Then I slowly moved into large repertoire. Now I going back to what my original dream was and that’s to sing musical theater. I just released a crossover album As Long As There Are Songs. I wrote a cabaret about Kate Smith for PBS last year and have traveled that around the country. I do a lot of what Eileen Farrell did at the end of her career and I love it and, truth be told, I prefer it. I’ve made my career on switching it up.

SDR: What do you mean by switching it up? By singing something different?

SB: ...By singing something different all the time. I’ve always done a lot of recitals. At this point my recitals are mostly in English. I sing a lot of American music. I have a young artist program that I started at my alma mater [State University of New York at Potsdam, Crane School of Music]. I teach 6 singers and 3 pianists for a week in May and work on nothing but contemporary American Songs. I do a lot of contemporary music. I’m about to do a professional contemporary opera for the first time.

SDR: That’s the one about Gertrude Stein?

I've always cast a very wide net for the music I like to perform and listen to. I think that is born from being the child of a jazz musician. I had a mother who appreciated symphonic music and opera and a father who played jazz. I’ve always had a wide palate.

SDR: Was there a point, that you remember, when you went from a working singer to an in-demand singer?

SB: No. I had a fairy-tale beginning to my career that has really never stopped. I graduated twice from Potsdam. I graduated with an English degree in ‘91 and music degree in ‘92. I have two bachelors' and it took me 6 years to get them...because one year was a sit-out-and-smoke-marijuana year. I told The Times I majored in marijuana for at least one semester. I got over it! It hardly made me what I am today but it didn’t hurt me that much. I finished those degrees and I didn’t know what I was going to do. At that point I was 22 and decided that I wanted to sing professionally. I took a year, stayed in Potsdam, studied with my voice teacher and I worked on audition repertoire.

I did two competitions. The first was the Eleanor McCollum audition in Houston and the second was the Metropolitan Opera National Council Audition In Houston, I came in third. I was one of the winners at the Met and they asked me to be in the young artist’s program. I literally went from undergrad into the Met and I’ve been singing at the Met every season since. I mean, that’s outrageous. I consider myself extraordinarily fortunate that I have, with my agent, sculpted a career that has basically been in the United States. In the beginning I sang quite a bit in Paris and I sang at Covent Garden but now I choose to sing in my own country because I can. I can sing a full schedule in this country and I’m happy to because everytime I sing here I get to see a different part of my own country. That is a very, very fortunate situation because I happen to love this country and I love the fact that I’ve been able to see so much of it. I’m continually meeting other Americans and I really dig that. 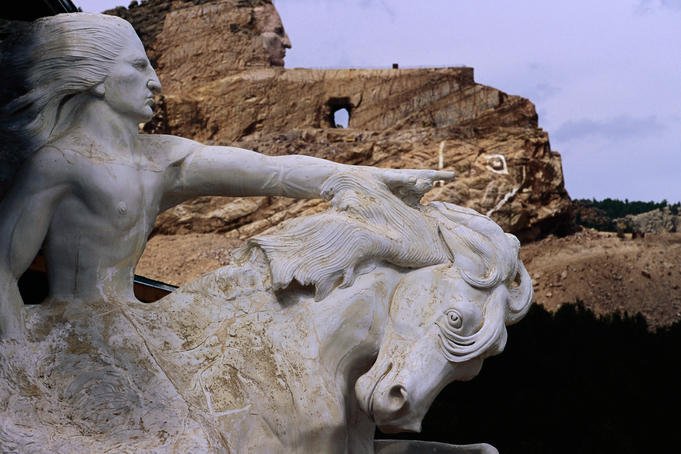 Crazy Horse Memorial. Foreground: What the completed monument will look like. Background: The work in progress.

My husband and I spend a lot of time on the road now. I mean literally on the road. We drove here to San Diego [from Pennsylvania] and we drove to Seattle last summer. We’ve driven all over the South. We drive whenever we can. I call it our QE2 time [Queen Elizabeth 2]. That’s really how singers used to keep themselves on the down-low. If they were singing “across the pond” they would have to get on a ship and then they would have a certain amount of time when they were not singing — a forced rest. For me, driving across the country is my QE2. I try to drive as often as I can. I love it. How many people can say they’ve been to Blue Earth Minnesota and seen the Jolly Green Giant?

There’s just something about driving through South Dakota and the Black Hills and seeing Mt. Rushmore and seeing the Crazy Horse Memorial. Seeing these monuments is unbelievable and it gives you a context for art. Travel gives you a context for art. Now people will argue with me and say that traveling in Europe will help your art more. That is absolutely true but the study of opera is, more or less, the study of human beings. You’re going to get that anywhere. Understanding what makes a character tick is just about understanding different kinds of people and different situations. It’s fascinating to see these places and meet the people and see how they interact with each other.

The interview continues in part 2.