Refused to be left out of the Happy Hour fun 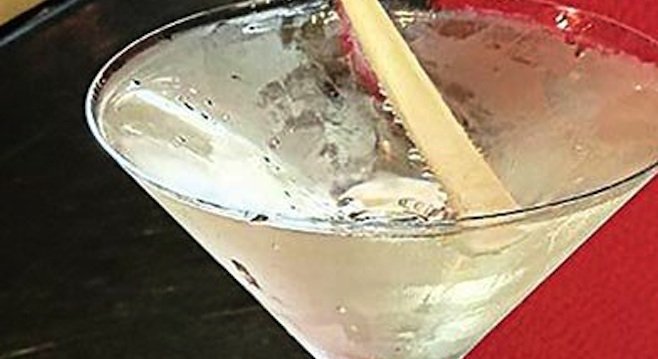 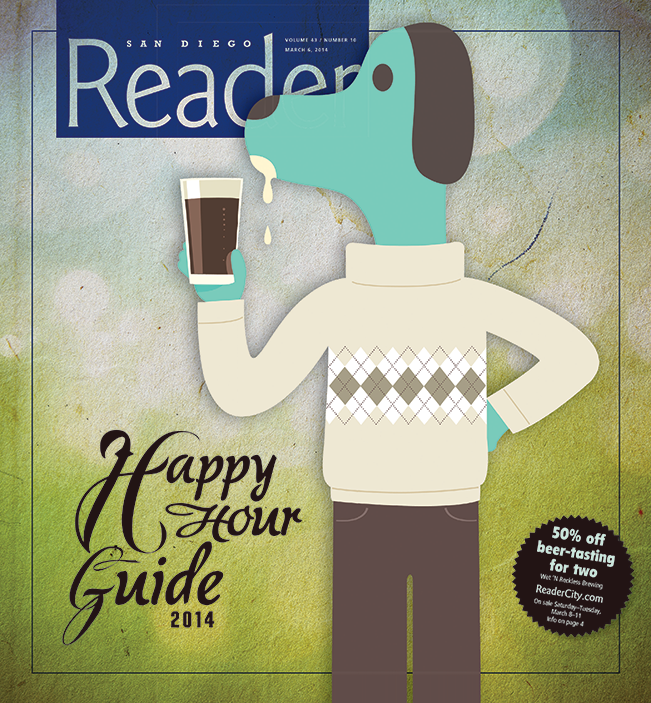 The bar is loud and hopping, even on seemingly off nights. Beers are $1 off normal prices but each $4.50 margarita (served blended or on the rocks), gets you a small paper plate for free appetizers. The goodies are ever-changing and range from chips and salsa to flautas or the most lip-smacking chicken drumettes I’ve ever had. The chef braises them in the broth used for the chicken tortilla soup.

The term “Happy Hour” is taken literally at this newly hatched bistro in La Mesa’s village. It goes from 4:30 to 5:30, mainly because the place gets packed for dinner during normal Happy Hour times. (La Mesans eat early.) During the 60-minute Happy Hour, diners get half off on select items, such as fried-chicken sliders and roasted jalapeño deviled eggs (highly recommended). Drink specials usually revolve around one wine, one beer, and a specialty cocktail invented that day, such as the “Peach Press,” a combination of Ciroc peach vodka, Sprite, and soda water. The restaurant’s signature cocktail, the La Mesa Lemonade, costs $10 during Happy Hour, but you get to take home a BO-beau-branded mug.

This dark but cozy bar is like the film noir movie of my dreams — if Sam Spade were a foodie. The cocktails — usually $12 and worth every penny — are half off between 4-7pm. The Cinners ’N’ Sage (gin, cinnamon syrup, pineapple, lime, and sage) tastes like a glorious Santa Ana day put into a cocktail. The fried pickles are crunchy, and the San Diego poutine (carnitas, fries, salsa roja, jack and manchego cheeses) is a sublime creation that respects the region’s culinary flavor and the community’s ability to adapt outside ideas.

This tiki culture landmark practically invented Asian fusion cuisine when it opened in 1955. It has a great view of San Diego Bay and, most important, the strongest drinks in town. Seriously. Happy Hour starts at 3pm, when the super-strong mai tais cost only $5. The price goes up with each passing hour. Bali Hai sells its signature coconut shrimp for $9 during Happy Hour, a $6 discount, while the Island Beef Skewers and Wasabi Fries are also discounted. If you want the true tropical vibe, go on Tuesday nights when Desi Relator plays Hawaiian music on acoustic guitar from 4-7pm.

A good Happy Hour has good cheap food, and good cheap drinks. RA Sushi has those and something extra: more women than men — an 8-to-1 ratio on one recent Monday night. Specialty rolls on sale range in price for $2.75 for edamame to $7.75 for the signature Viva Las Vegas Roll (almost a 50 percent discount). Happy Hour lasts from 3-7pm Monday through Saturday, and on Sundays from 8pm to midnight, and there’s a DJ. The cocktails include a variety of margarita and saketinis, but the Umami Punch, made with Southern Comfort, Amaretto, Disaronno, sake, and tropical juices goes best with the sushi. 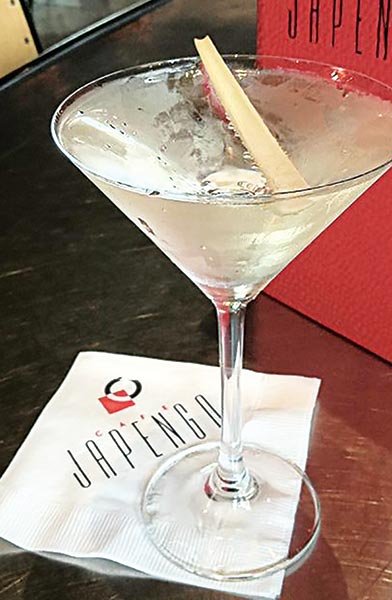 Considering head sushi chef Gerry Warner is internationally respected, Cafe Japengo’s sushi prices during Happy Hour are pretty damn good, starting at at $3.50 for a California Roll to $7 for his Hawaiian Roll. The hours are 4:30 to 7pm Monday through Friday and all night on Saturday, when the bar offers a huge Kobe beef burger for $18, including a draft beer. The best Happy Hour dish (and one of the best in the city) is the curry-dusted calamari, served with glass noodles, and a seaweed salad in a Thai-lime vinaigrette. Specialty cocktails like the Burning Sun (Absolut Mandarin with jalapeño syrup and fruit juices) and the White Geisha (Coconut rum with lemongrass and lime syrup) are strong, but don’t necessarily complement the delicious food as well as the great beer or wine menu.

This place gets pretty crowded during Happy Hours, and with good reason: Between 4-6pm, oysters are $1. The Happy Hour menu also includes risotto balls, mussels in white wine, and the best brussels sprouts in the city. Each night features a particular booze that has been infused with a complementary flavor. Thursdays and Fridays have music, usually a guy on piano or acoustic guitar.

Brian Malarkey’s flagship restaurant in the Gaslamp is a bargain in many ways, especially if you love fried pickles, which are only $1 between 5:30-7pm. Housemade beer nuts are $2. Other goodies include brown butter fries and farm-bird lollipops served with hot sauce and blue-cheese fondue. (Malarkey’s menus can be precious at times, so if you’re confused, that’s his variation on chicken wings.) The flagship cocktail at Searsucker (and my favorite in San Diego) combines Pimm’s liqueur with bruised basil, pressed lemon, and pickled carrot. The perfect hot-weather drink.

Puesto at The Headquarters

Puesto at the Headquarters

This newly opened restaurant near Seaport Village is already a Happy Hour staple between 3-6pm, thanks to excellent tacos, such as the filet mignon and lobster, and mezcal cocktails bordering on brilliant (and only $6 on Mondays). The La Verdad, made with cactus juice, comes highly recommended. Usually tacos come in a three-for-$11 order, but they’re $2 on Tuesdays. Non-drinkers should come on Thursday when the bar makes fresh aguas frescas. For an extra fee, alcohol can be added. On Fridays, the Mexican Firing Squad, made with reposado tequila, lime, house-made grenadine, and Angostura bitters is only $6. People expecting a combination plate will be disappointed. This is not a beans-and-rice type of place.

East Village is still trying to figure out whether its a tourist attraction or an actual neighborhood, but the Blind Burro manages to feel like a comfy neighborhood bar despite only being open a year. If you’re not drinking beer, the margaritas are strong, and the white hot sangria, which has a slight amount of jalapeño, is the drink to get here during Happy Hour when it’s $6 (a $3 discount). It pairs very well with the Happy Hour specialty, the $7 yellowtail fish collar. The fish collar is a meaty part of fish favored by foodies and chefs but ignored by the masses because its tiny bones don’t make it user-friendly. Blind Burro puts a sweet, smoky glaze on it and it’s one of the best Happy Hour dishes available anywhere. Another good bet are the bacon-wrapped roasted jalapeño peppers, only $4 between 4-7pm Mondays thru Friday.