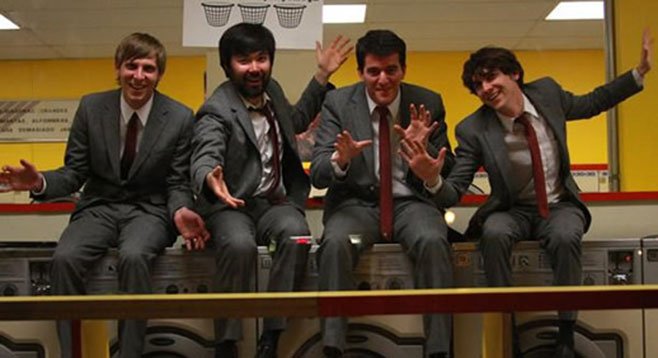 “We’re re-releasing digital formats of defunct San Diego bands, to bring their music back to life,” says Stephanie Rose, production manager at Aural Gravy Records. “We’ll be releasing one album per week, beginning in March, and so far we’re slated to take it through the end of May, with more bands being added.” The label will drop one album per Throwback Thursday, priced at $3 for the first week and then $5, beginning March 6 with the first of several albums by the Modlins, followed by the entire Hotel St. George catalogue.

Asked if bands were worried about lowball pricing devaluing their own merchandise, Rose says, “Not at all. Since their initial releases, record sales have tapered off, so right now the bands only have something to gain.” As for how the label will profit, “We’re putting out entire catalogs for artists who are no longer together releasing new material.... By releasing the records in digital format, we don’t incur major up-front costs. The records were paid for long ago, so anything we bring in, no matter how small, amounts to a profit.”

The label wholesales new releases on their website for $8, and, “At shows, we provide interested people with CDs on a donation basis. We’ll give out a record for a penny, if it comes down to it. But most people end up giving us five to ten bucks. The record stores and online outlets can charge what they wish, but we get about $6 to $8 back from them on the average.”

Founded by David Miano in late 2010, Aural Gravy has released new local music from the Very, New Kinetics, Kelsea Little, the Peripherals, and, most recently, Miano’s band Cut (formerly known as PostCrush), with two releases already nominated for San Diego Music Awards. According to Rose, “So far, our best-selling releases have been our last two, Kelsea Little’s Personal Myth and the Peripherals’ Declarations.”

Miano has a volunteer staff of between four and ten people (“depending on how much help is needed at any given time”) who take care of production, publicity, and college-radio promotion. “The website has a music store that offers not only the music of Aural Gravy artists, but also the music and merch of any other San Diego artists who want another outlet for sales.”