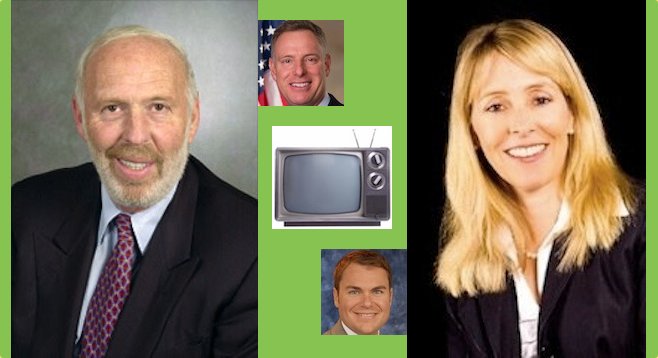 Connoisseurs of San Diego politics who revel in high-dollar distortions, trumped-up attacks, misleading statistics, and all manner of election-time TV commercial casuistry will be enjoying a record season come this fall.

Others will need to be quick with the mute button.

Over at CBS affiliate KFMB, an inside-the-beltway outfit called House Majority PAC has just plunked down a gross total of $155,595 for 181 spots to run between September 29 and November 3.

The disclosure doesn't specify what message the commercials will be delivering, but the political committee's website may provide more than a bit of a hint.

"As the super PAC focused on holding Republicans accountable and helping Democrats win seats in the House, House Majority PAC combines innovative new approaches with time-tested strategies to do battle with Republican outside groups and make a difference," the group declares.

"Formed in April 2011, House Majority PAC’s goal was to answer the barrage of GOP outside spending and ensure that never again would groups funded by Karl Rove, the Koch Brothers, Sheldon Adelson and the like be able to drown out Democratic candidates."

The only congressional race believed by political watchers to be competitive within KFMB's broadcast reach is the one between freshman Democrat incumbent Scott Peters and GOP ex-city councilman Carl DeMaio.  Major special-interest money is expected to pour into the contest from all sides.

According to the latest numbers posted online by OpenSecrets.org, the House Majority super PAC has thus far spent a total of $4,077,440 during the 2014 election cycle.

Euclidean Capital, run by 74-year-old hedge-fund billionaire James Simons of Manhattan, known as the "Quant King,"  was top giver to House Majority with $1 million. Two years ago, Simons was ranked by the Associated Press as the number-two financial supporter of Barack Obama's reelection cause, with $3.5 million by the end of October of that year.  La Jolla Qualcomm co-founder Irwin Jacobs was fourth, with $2.1 million.

$693,285 of House Majority’s cash this cycle has been used to back Democrats; $3,378,155 was devoted to bashing Republicans, which may prove to be predictive of a gory anti-DeMaio show come autumn.

But the ultimate joke may be on Peters and House Majority.

KFMB owner Elisabeth Kimmel of La Jolla, a longtime DeMaio financial backer and a mega-millionaire in her own right, has been accused by conservative Republicans of manipulating the stations' political coverage in favor of DeMaio and keeping the ex-city councilman's GOP foe Kirk Jorgensen off the air during a hard-fought, social issues-laced primary battle this spring.

Kimmel — an heiress to August C. Meyer, Sr., who bought the TV station and its two radio stations in the 1960s — has also backed causes linked to the billionaire Koch brothers of Kansas by way of her family's charitable foundation.

Fallen mayor Hedgecock and other on-air attack dogs are expected by insiders here to launch a take-no-prisoners broadcast war on Democrat Peters once the campaign swings into high gear in the fall.