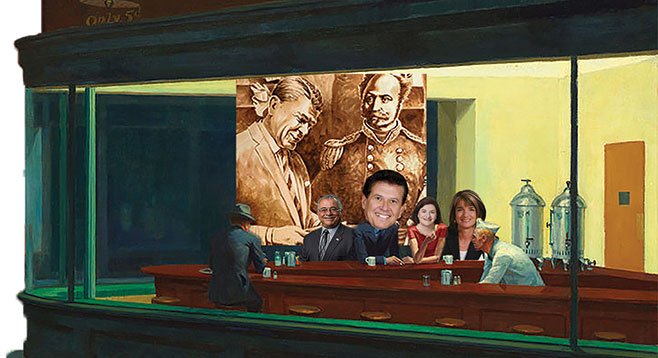 Eating has been good for state legislators who stay on the good side of San Diego–based utility giant Sempra Energy, according to the firm’s latest lobbyist disclosure filing. At Sacramento’s Downtown & Vine, Sempra played host on February 26 to Democratic Assembly members Shirley Weber and Lorena Gonzalez, along with lower House Republicans Brian Maienschein and Marie Waldron. Democratic senator Ben Hueso also was included. Each got a meal and drinks worth $86.60 at the eatery, which boasts that it “brings wine country to Sacramento.”

The same day, assemblywoman Toni Atkins (who became Assembly Speaker in May) joined Democratic senator Marty Block and Republican Assembly members Diane Harkey and Rocky Chavez for a meal said to be worth $36.78 each at the exclusive Sutter Club, where admission is limited to members only. “The Bar/Club Room Lounge is like a movie set from a 1940s melodrama,” wrote a Sacramento Bee reporter who managed to get through the doors for a brief time in 2012. “The front and back bars are of aged dark wood, dominated by a gigantic mural created by artist Stephanie Taylor for the club’s centennial.” The writer added, “We sat in a booth inside the dining room and looked around. Huge windows, polished brass, dark wood, high ceilings, six wrought-iron chandeliers, impeccable service.”

Meanwhile, back on the Barona reservation in San Diego, assemblywoman Gonzalez dined with her field representative Marco Briones on free food worth $21.68 each. Democratic state senator Ricardo Lara, a product of San Diego State, did better, with a gratis dinner worth $65.85 at Morton’s Steakhouse in Sacramento, thanks to the tribe.