Jon Snow is no hipster 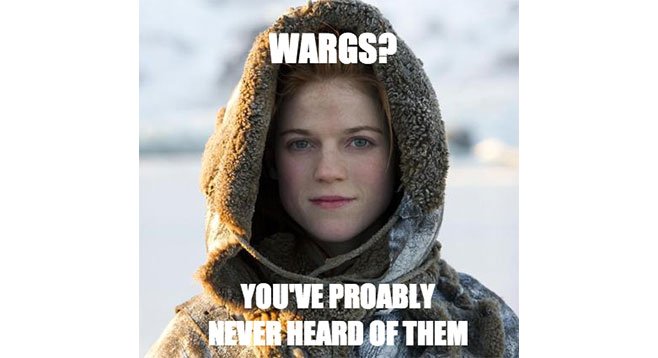 I just saw that YouTube video of Game of Thrones re-imagined as a cheesy, ’90s fantasy drama. Hilarious! I saw the comparison of GoT fashion and haute couture, which made me laugh. Then, I found the drawings of the principle characters dressed like hipsters. Now, my friends and I are locked in heavy debate over the following question: who is the biggest hipster on Game of Thrones?

Westeros hardly teems with hipsters. As far as I can tell, their music scene extends to songs of Lannisters annihilating rivals. Nevertheless, I spy some hipsterism in and around the battle for the Iron Throne.

Tyrion Lannister has sharp, sardonic wit, but his most hipster quality is his staggering ability to spend his father’s money on girls and recreational substance abuse, disappointing the old man on a daily basis. He loves city life, though he makes forays into the country from time to time, perhaps to Instagram photos of himself wearing flannel in the presence of hay. However, he lacks the most important quality of a good trustafarian in that he isn’t some kind of ceramicist, musician, or writer endlessly working on an ironic novel.

How about Margaery Tyrell? She’s a nice, Midwestern girl (the Reach is basically the heartland of Westeros) who went instantly native in the big city. The only thing she likes more than trying to become queen is putting on old-school dresses and visiting the peasants at the farmers’ market, finding great deals on local, sustainable pickled okra.

Jon Snow is no hipster. He’s way too serious, despite being too cool for his vows by making hanky panky with his girlfriend. She, on the other hand, is a hipster chick if ever there was one. “Oh, you’ve never met a warg before?” she says, implying that, “You know nothing, Jon Snow” is the GoT equivalent of being into something before it was cool.

Of all the wannabe cool kids in the Seven Kingdoms, the award for hippest hipster on Game of Thrones goes to none other than Petyr “Littlefinger” Baelish. He sets trends, like inventing his own sigil, despite the establishment’s mockery. With that wicked side part and cheeky little mustache, can’t you just see him ordering single-origin espresso at some indie-fabulous shop in Flea Bottom (the capital’s notorious slum)?