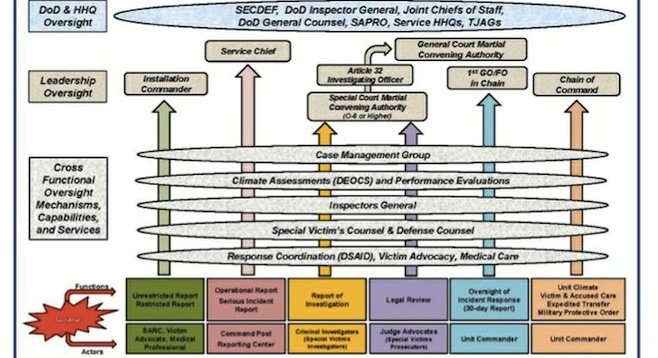 The Pentagon is out with its annual "Report on Sexual Assault in the Military," covering the 12 months between October 2012 through September of last year, and numbers have been on the rise.

The Defense Department "received 5,061 reports of alleged sexual assault involving one or more Service members as either the victim or alleged subject (suspect) — a 50 percent increase over the 3,374 reports of received in [the previous year]," according to the report.

"The Department assesses the unprecedented increase in reports received in [fiscal year] 13 as consistent with a growing level of confidence in the [Defense Department] response system. This year, a record number of victims sought assistance and care by making a report."

But the document goes on to acknowledge, "Despite improvements in reporting, sexual assault remains a persistent problem."

The annual review contains a list of sexual assaults by each service. The Navy didn't say where its incidents occurred, but the Marine Corps provided a detailed survey by jurisdiction. According to those results, many of the incidents reported in San Diego happened off base, with local law enforcement often deciding not to follow up.

According to an account of one alleged rape, a "civilian subject pinned Marine Victim down with her head against the headboard and his arm across her neck. Civilian Subject then pushed Victim's pants/shorts to the side and penetrated her vagina with his penis against her will. San Diego Sheriff's Office assumed investigative jurisdiction. SDSO closed their investigation based on the lack of evidence."

In another incident, a Marine "awoke and discovered her pants and underwear had been removed and she felt 'something was not right’ with her vaginal area.

“A fellow Marine drove Victim home and reportedly told Victim she had seen Marine Subject 'on top' of Victim having sex with her while Victim was passed out. North San Diego County District Attorney's office declined prosecution based on factors citing reasonable doubt a crime occurred."

The accused Marine was ultimately brought to trial by the Corps for failing to obey an order and discharged, according to the report.

In addition to providing statistics and anecdotes, the Corps reviewed its anti-sexual assault policies and procedures at San Diego's Marine Corps Recruit Depot.

"There is currently one female Sergeant Major assigned to MCRD San Diego as part of a new Marine Corps initiative to expose new male recruits to female leaders," says the review. "Sexist or degrading comments are neither heard nor tolerated. Individual [drill instructors] are virtually never allowed to be alone with individual recruits.

"Chaplains play an especially prominent role as confidential sounding boards for individual issues and as monitors of command climate. In addition, recruits of both genders are systematically interviewed individually by company officers to assess their experiences and check for any mistreatment.

"Female recruits all train at MCRD Parris Island, where the all-female 4th Recruit Training Battalion is housed in a separate barracks compound," the report notes. "Female recruits are closely monitored and mentored by female DI's. They have good access to women's health services at a nearby medical clinic.

“At both MCRD locations, recruits themselves and many others confirmed that recruits in training are not afraid to report misconduct."