South of Rosarito, at Ruben’s, Ed becomes a happy camper. 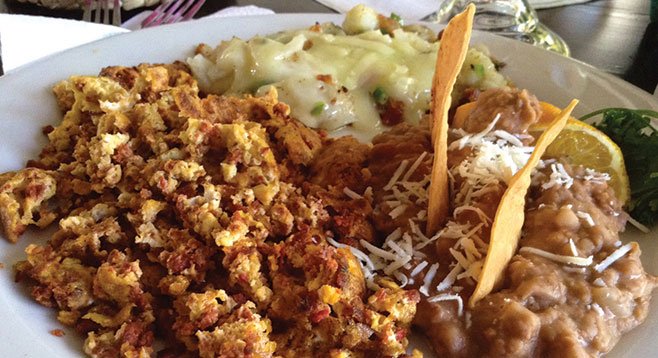 You’d never notice it if you were a first-timer like me, but my friend Albert does.

“Kilometer 46!” he yells. “So our place is on the right somewheres. Among the palm trees.”

He has brought me down about 12 miles south of Rosarito on the Tijuana-Ensenada carretera libre, to show me this other world he lives in half the year. It actually saves him money, he says. He can’t afford not to.

A sign, “Ruben’s Baja Palm Grill,” stands near a really cute thatch sorta roadside place among trees on the right. Al weaves onto the side of the road. Then he does a U-turn — kinda scary on this fast road — then turns left again, crosses the south-bound lanes and bumps to a halt in front of a gate with a white bar preventing easy entrance. A red-and-white sign in Spanish and English reads, “Complejo Turistico Cantamar.” 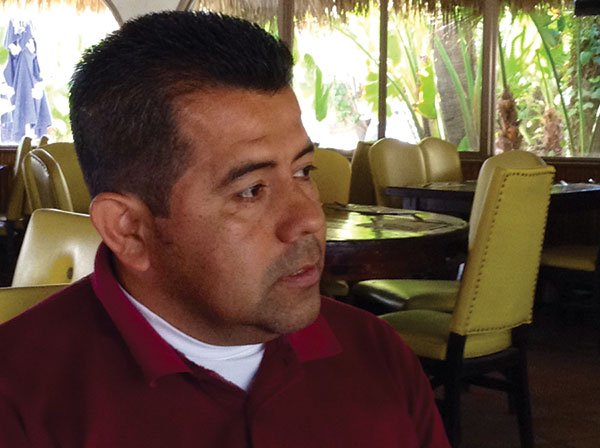 Security guy comes out of the white gatehouse. You can see a whole settlement in there lined by palms all the way down to a blue ribbon of sea at the end.

“We’re going to Ruben’s,” Al tells the guy. He presses a button that starts the gate sliding sideways. We roll a few yards and crunch onto a dirt drive beside a sign that reads, “Ruben’s Here.” We turn in under a vine-covered arch to a courtyard and a building covered by a huge low-spreading thatched roof. It makes you think of southern Mexico, Acapulco, the jungles of Chiapas.

“These are good deals,” says Al. “This place is top of the line.”

Inside, it’s a big, bright place with way-high thatched ceilings and white walls, plus arches and views out to gardens beyond the palapa overhang. Big red Mexican tiles on the floor contrast with padded yellow chairs, black marble tabletops. We’re just about the only customers right now. But this is mid-afternoon and Monday, after all.

“You betcha,” says Al. “You ought to come for the weekend brunches. It’s packed. Lots and lots of ex-pats. There’s about 100,000 of us living down here, between TJ and Ensenada. Ruben caters to all of us. His food’s Mexican, but with plenty of gringo dishes, too. This compound we’re in, it has thousands of Americans living here at least part of the year. It’s a fun place. Like, at the Saturday and Sunday brunches, you have champagne, mariachis, dancers, special acts. People get up and dance. And groaning tables and bottomless champagne. You come at, say, nine in the morning, I guarantee you won’t get out before two.” 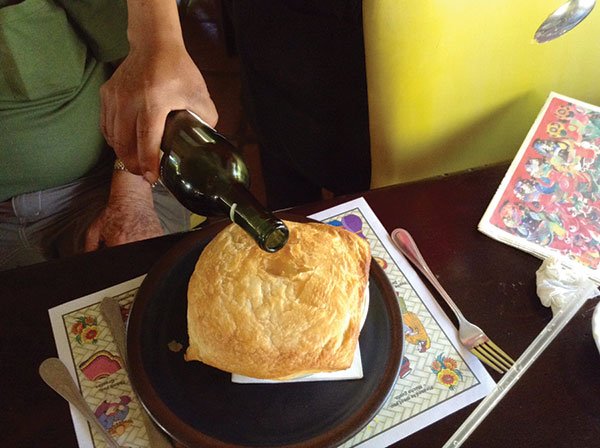 Al’s lobster bisque, covered in puff pastry, gets a jigger-full of sherry.

The waiter brings us the menu, which is still offering breakfast, and at good prices. “Yes, you can still have breakfast,” says the waiter. “Anything at any time.”

Most breakfast items run between $4 and $6. Motuleños eggs ($5) is a Yucatán breakfast dish, basically eggs on tortillas with black beans and cheese, plus maybe plantains, ham, peas, and salsa. The eggs Benedict, which I love, is $6. But then I spot the chorizo and eggs ($4.50). Love a good chorizo. I order that.

Al, on the other hand, knows exactly what he wants and it ain’t breakfast.

“Give me that lobster bisque special you had on the sign outside,” he says, “and give me a little salad besides.”

My chorizo is a big plateful, along with frijoles and potatoes and chunks of orange on a white plate. The salsa helps heat up the chorizo, and I’m a happy camper.

But Al’s got the prize today. His lobster bisque is a bowl of the stuff covered in a fine pastry. And when it arrives, the waiter punches a hole in the middle and pours a jigger-full of sherry into the belly of the beast. Man, I’m mad with envy.

“In a good bisque,” says Oscar the chef who’s on his way out to the sun for a break, “you grind the shells of shellfish into a fine paste to thicken the soup. It’s great for flavor, and for adding calcium to the body.”

Ruben, the man himself, comes by. “Is it difficult?” I ask. Because his is not exactly an easy location to find. 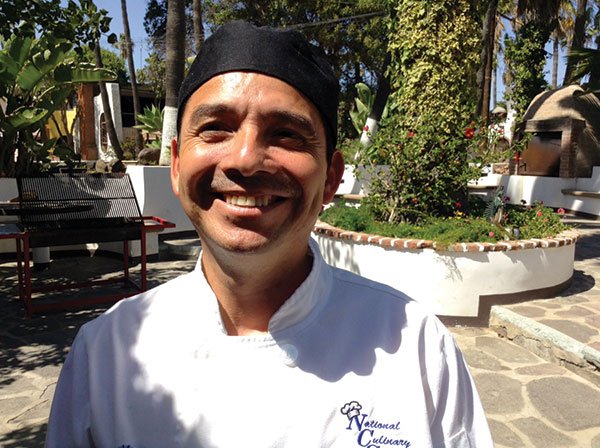 Oscar the chef, in the patio

“Well,” he says, “we’ve been through difficult times ever since Americans stopped coming down, after 9/11. I had 23 families of my staff to support. Some days we would have no customers at all. But, thank God for our weekend brunches. We are quite famous for them, and people kept coming. That saved me. I still have 18 families of my staff who depend on a pay packet.”

Now I’m determined to get back down here, not to give Ruben my hard-earned dollars so much but for the bisque and the brunch. That brunch sounds like total fun. Think we’re talking around $15. And I’ve got to get that bisque into my maw.

But the other thing that calls to me is, this doesn’t feel Border. It feels México. You’re surrounded by Côte d’Azur–style developments, even though, yes, it’s still real spotty in between them. But we’re just an hour south and, for sure, it’s a different world.

Thanks Gerald: It is the same management, the same Ruben at the new Ruben's. Splash sounds awesome. I'll see if I can get my buddy to haul me down again. Or else, what's wrong with the taxi de ruta?