School-district board president is not described as humble 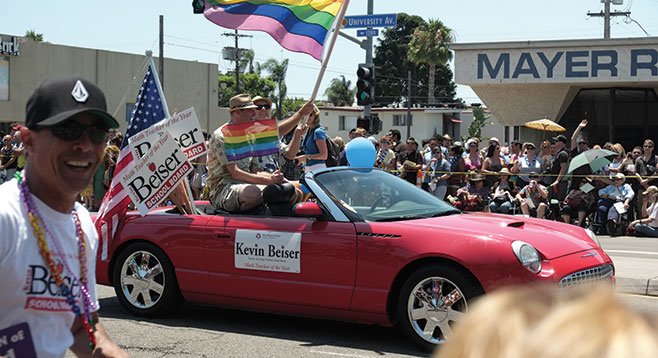 Not long after getting elected trustee for the San Diego Unified School District in 2010, Kevin Beiser returned to the campaign trail. Some say he never left. 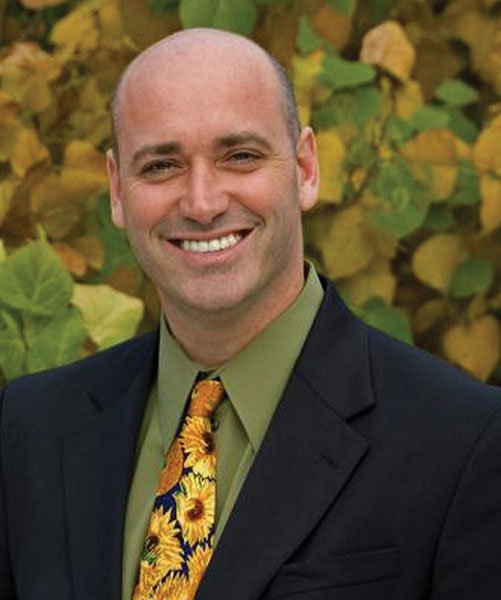 ​Math teacher Kevin Beiser​ is raising and spending campaign money at rates unheard of for the office of school-board trustee. He’s out-raised his opponent 16 to 1.

Since 2010, Beiser has raised nearly $80,000 and spent upward of $60,000 for a primary run in which he was guaranteed, as was his opponent, to make it to the November ballot. The war chest is an unprecedented amount for what is often a thankless and low-paying office of school-board trustee. The $18,000-a-year stipend provides little incentive to take part in contentious board hearings, which put the incumbents in the driver’s seat for any reelection bids. Despite all this, Beiser — a math teacher in the Sweetwater Union High School District — is a fixture at parades. His signs, some of which are stamped with official district logos, are fixtures throughout the city. At events, Beiser is often accompanied by an enthusiastic bunch of high-school-aged teenagers, their wide smiles hidden by the political signs they hold.

Then there are the fundraisers hosted by political power brokers typically reserved for the most heated political races for higher profile offices.

At least one colleague and several former supporters have criticized Beiser’s approach, some saying that some of tactics, if not illegal, are just plain immoral. 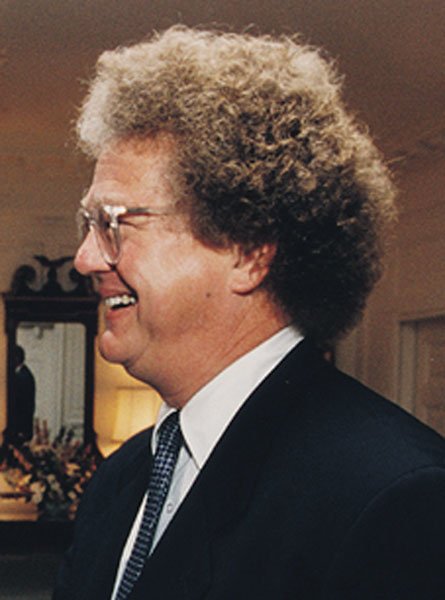 Beiser brought a group of students “primarily of African descent” to see the African art collection of convicted felon Bill Lerach, who later hosted a big-money fundraiser for Beiser.

Lerach, a La Jolla millionaire, former class-action lawyer, and convicted felon, in 2007 pleaded guilty to involvement in a $251 million kickback scheme with a client. Lerach has been active in San Diego politics since his release from custody in 2010.

Eight months after the field trip, Lerach hosted a political fundraiser for Beiser at his La Jolla home. Attendees included Joan and Irwin Jacobs, congressman Scott Peters, and some of San Diego’s wealthiest and most influential residents (as reported by the Reader’s Matt Potter).

Emails obtained from a public-records request show how the field trip unfolded.

Talk of opening Lerach’s home to students occurred in early 2013. By March, Beiser was at work setting up the field trip.

“We are ready to identify a date/time to bring 10-12 students to tour your amazing African artwork,” Beiser wrote in a March 12 email to Lerach. “I am working directly with the principal at Lincoln High School to invite students in their AP art class as we discussed.”

After Lerach gave his stamp of approval, Beiser then started his search for the lucky students. He called on his fellow school-board member Marne Foster, principal of Lincoln High School Esther Omogbehin, and his now-former campaign manager Elizabeth Leventhal.

“This is one of the best original African art collections in the US/World at Bill’s residence in La Jolla. There are even pieces that pre-date European exploration to the African continent. We need to identify ten-to-twelve students in AP art class that would be interested, primarily of African descent is preferred by Bill.”

On March 24, as the search for interested students continued, Beiser asked Lerach to pay for the bus trip to La Jolla. Less than one month later, on April 16, Beiser began working to procure an official “certificate of appreciation” for Lerach and his wife. By the beginning of May, Lincoln High’s principal, Omogbehin, was still searching for students interested in the Saturday field trip.

“Too bad no one in art class wanted to go — amazing,” Beiser wrote to Omogbehin.

The field trip occurred on May 25.

Eight months after the trip, Beiser was invited back to Lerach’s house for the fundraiser, which brought scores of San Diego’s most powerful, and wealthy, political donors.

The fundraiser and others like it paid off. By December 2013, just under one year from the election, Beiser had raised $73,141. His opponent, Amy Redding, has not cracked the $5000 mark.

But Beiser’s funds aren’t just from San Diego’s political power brokers, much of it has come from charter schools wishing to open schools within district boundaries. Since 2013, the Sweetwater math teacher has received $10,900 from charter-school administrators and proponents of charter schools. Donors include directors and CEOs from Albert Einstein Academy, King Chavez Neighborhood Schools, Gompers Preparatory Academy, Thrive Public Charters, as well as from the California Charter Schools Association Advocates.

Their support seems to have paid off. Of the nearly 35 charter-school-related items before the board from December 2013 to May 14, Beiser voted against 2.

Opposing someone with such political prowess has proved difficult to overcome Redding is a former biotech worker who currently advocates for disadvantaged students on the District Advisory Council for Compensatory Education.

“Before I entered the race I could see that he had already raised over $70,000 in one year alone,” says Redding. “I could see from the board agenda and by attending meetings that he was sponsoring many proclamations and resolutions that he would later present to organizations that could help him politically.... And then there are the parades,” Redding wrote in a June 3 email.

“That money does have influence, as does the need to keep endorsements. You cannot be completely independent when you need to please special-interest donors and endorsing organizations. Your agenda and votes may not always be in the interests of children, because the influence of money and the pressure of organizations, particularly during an election year, may cloud your judgment.

“Despite all of Mr Beiser’s advantages, I just couldn’t stand by and not run for school board. I have spent the last nine years championing the needs of students in San Diego Unified. I have worked very hard at the school sites and at the district level to keep the needs of the children at the center of the decision-making. All too often, I see decisions made at the expense of the children.”

Redding is not the only one to have harsh words for the school-board president.

His colleague on the board, Scott Barnett, recently said of Beiser during an interview with Voice of San Diego, “This guy goes to more parades and ribbon-cutting ceremonies than any other politician I’ve ever met. He’s more interested in improving his image than he is in helping us make the tough decisions that improve the district.”

And then there are the former supporters.

“Beiser is essentially running like someone with a major opponent,” says one of Beiser’s former supporters who wished to stay anonymous. “I’ve been in politics for almost 15 years now and never seen anyone like Beiser candidate-wise or campaign-wise, particularly on the local level. He takes it to a whole other stratosphere. He just came out of nowhere and went from 0 to 60. By doing so, he forgets that sometimes that’s not always a good thing. Essentially, Kevin is trying to use old tactics to appeal to new voters.”

Beiser’s former supporter continued, “I do feel that Kevin ran in 2010 for the right reasons. He’s a teacher and obviously cares about both students and education policy. I do know there is passion behind it all. I think that shows in his votes, his resolutions, and his leadership on certain issues, such as bullying and the environment. I also think a little humility and experience go a long way. Good intentions are great, but being able to stand strong during tough times may be even more important — since it’s the way those intentions and values are made into something long term and meaningful.”

Asked about the field trip to Lerach’s house, Beiser responded, “The field trip was academic supporting the arts.”

Regarding the busloads of teenagers at his rallies, he said, “Parents who support my work often bring their children to join us at community events.”

As for the tens of thousands of dollars he has raised, Beiser responded, “I am honored that hundreds of individuals have contributed to my campaign from across San Diego.”

Beiser received 66 percent of the vote on June 3.

Yikes! Looks like Beiser is going to reach for the stars--except, having a background that includes Sweetwater, he may have learned all the wrong lessons.

Kevin Beiser's only shortcoming is that he has been unable as school trustee to put the education of students at the top of the budget and bureaucratic list of things-to-do. In this, he has decades of well-meaning company.

Ten years ago, downtown business moguls and the Chamber of Commerce teamed up to elect and try to run the Board of Education and they named a politically ambitious litigator without education background to be superintendent. Today, Labor dominates the Board of Education: trustee Richard Barrera is also head of the local AFL-CIO Labor Council; every Board member takes campaign money from Labor; and the local teachers union SDEA has become a member of that Labor federation. Last year this group named its own superintendent: a green local elementary school principal.

Contrary to the churlish criticism of frequently AWOL ex-trustee Scott Barnett, Kevin Beiser is a genuinely good person -- hard-working, personable, up-front, devoted to kids. He does willingly and open-handedly participate in community events, such as emceeing a too-long Saturday night concert by the San Diego Children's Choir earlier this year. He is the first gay trustee on the San Diego Board of Education and he is a middle school math teacher of uncommon skill.

Personally, I'd like to see Kevin challenge Todd Gloria for Susan Davis' seat in Congress. He has more to offer the community than the calculating Gloria and his talent would be wasted in Sacramento.

Huh? Is it all about who holds the biggest mic who can open their mouth the widest?

The truth is that SDUSD has upped class sizes ever since the brief period a decade ago when "class-size reduction CSR" was in place and funded by a Sacramento flush with money. In that moment there were never more than 20 children in grades K-3 -- the formative years for mastering literacy and numeracy (reading and math basics.) Over that time, achievement in early reading and math improved steadily.

Long-term California is famous/infamous for near-lowest funding of its public schools among the 50 States; for its large class sizes; and for its high teacher salaries. Over time, as the student population has become poorer and more multi-ethnic, this casts a pall over the future of our golden state.

Look for more of same in this next fiscal year, despite the Governor's tax increase and supposed "local control" of funds.