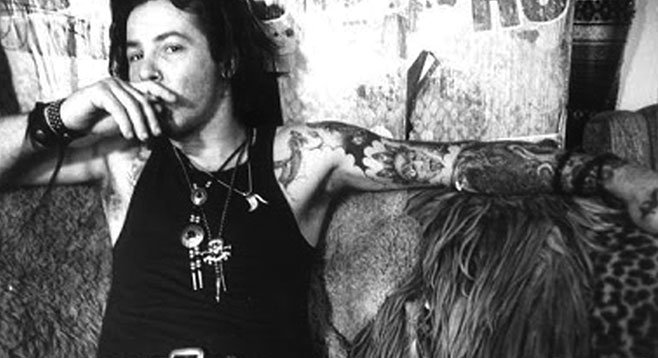 “This documentary is about Marc’s life, both good and bad,” says filmmaker Carl Schneider, who’ll screen a rough cut of his documentary Mad Marc Rude: Blood, Ink & Needles on June 22 at the Casbah. “There was a lot I didn’t know about, so I kept an open mind and tried as much as possible to stay unbiased, taking every unexpected path that turned up and follow it all the way to the end, regardless of how dark it might have gotten.”

Rude, who died in 2002, was an influential and eccentric artist whose work graced flyers, records, posters, torn T-shirts, and pale skin all over the world. In addition, “He played a major part of getting San Diego on the punk-rock road map in those early years, knowing many of the bands from his trips to Los Angeles. He managed to bring down bands like Black Flag, Circle Jerks, the Misfits...[San Diego] was a very conservative city, so putting on punk shows wasn’t an easy task. From 1981 to 1983, Dead or Alive Presents, which Marc was a part of, were responsible for all the hardcore shows.”

Filming started in 2003 and ended in 2013, with around 91 people interviewed and 59 featured, including musicians such as Penetrators frontman Gary Heffern, George Anthony of the Rude-managed Battalion of Saints (heard on the documentary soundtrack), Mike Stax (Tell-Tale Hearts), and Jerry Only (the Misfits), plus Off the Record cofounder Rich Horowitz and Dead or Alive promoters such as Clay Colgin (Men of Clay) and Mickey Williams.

Schneider, whose long-running Black Market magazine frequently showcased Rude’s artwork, was trying to contact the artist when he died (“from failed health and not a drug overdose, as rumored, though I’m sure the failed health was from using drugs throughout his life”).

“Nobody knew where he was, a few people said he was on the lam from the law.... A friend of mine found him in Las Vegas and gave me his phone number. A woman answered; she said she was his wife and that he wasn’t feeling well and he’d have to call me back. Four days later, she called me back and said he had died.”

The Casbah screening, a fundraiser to secure songs’ rights, will feature a rough cut just under two hours, which Schneider plans to trim. “Then it goes onto the film-festival circuit...my first edit was five and a half hours, and the whole thing was interesting, so many incredible stories. The toughest part was editing it down.”

Carl Schneider provided this preview trailer for the documentary - https://www.youtube.com/watch?v=5OEC0cjmSp0&list=PLj2dsA9h71kY1BT1yvbT43aqM9vFQlAML&feature=share&index=1