In case of a shooter on the rampage… 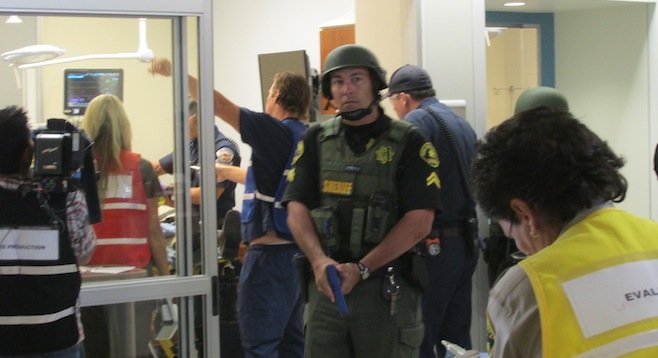 On June 6, Scripps Memorial Hospital in Encinitas was the site of a mock training exercise in the emergency room: a “patient” with mental problems walked out of exam room #13. As he was trying to be restrained, he grabbed the gun of a responding sheriff’s deputy. In a “shooting rampage” that lasted about a half hour, he shot 12 people, killing several. 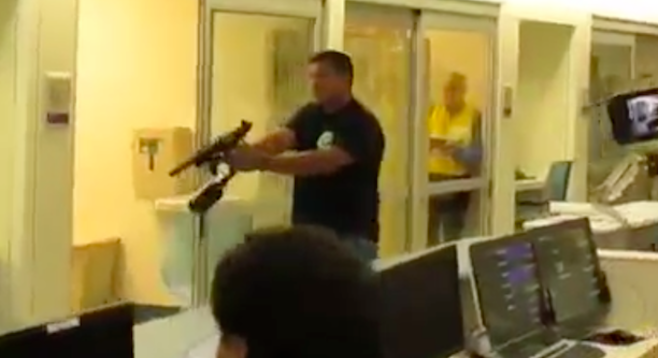 It was a planned, well-executed drill — training for over 120 sheriff's deputies and police officers from Carlsbad and Chula Vista, dozens of EMTs, and about 100 of the hospital’s doctors, nurses, and security and staff members.

The mock aggressor shot several people in the ER before fleeing into the building, using his weapon on doctors, nurses, and staff members at random.

Hospital security called a “Code Black” on the intercom — meaning everything and everyone gets locked down. In a planned miscommunication, some patients were being evacuated through the front doors, only to be told by deputies that the building was in lockdown and to turn around, find a room quickly, and stay there.

As critical “victims” were being found in the hallways, rushed to be cared for by doctors and EMTs, three teams of SWAT officers arrived, storming the building and shouting for all to raise their hands above their heads. Each person was ordered not to move until they could be identified as a staff member.

Once the ER was secured, its patients needed to be evacuated, yet staff had to remain on duty to care for them. EMTs and fire departments from around the area arrived to transport victims to other hospitals. A triage area was set up in front of the hospital.

Sheriff’s spokeswoman Capt. Adams-Hydar said if it had been a real emergency, the patients would have been wheeled to a secure off-site triage, probably across Santa Fe Drive to the Vons/Rite Aid shopping center.

By 10:50 a.m., the shooter had been located — after having taken a hostage — in a second-floor room. Scripps Health CEO Chris Van Gorder and sheriff’s Capt. Adams-Hydar held a mock news conference. While both realistically advising the press of what had transpired and what was involved in the mock operation, neither knew if the situation was over and or what happened to the suspect.

The Scripps exercise was in the works for two years between the San Diego County Sheriff’s Dept. and Scripps Health. It took place in the soon-to-be occupied newly constructed emergency room.