The many trials of Madame Tingley, part three 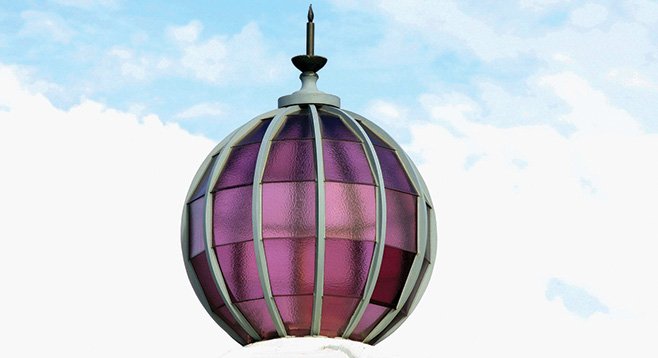 Tingle, tingle, little star / Oft I wonder who you are. / What you do that isn’t right, / Every blessed, spooky night.

In mid-October, 1901, as Madame Katherine Tingley’s Universal Brotherhood gained popularity, the Los Angeles Times ran a series of vicious articles about her “crank institution” at Point Loma: “The Spook’s Nest,” “Startling Tales from Tingley,” “More Spook Debate.” The “Purple Mother,” who tours San Diego on the raised back seat of an open carriage, like a queen on her throne, has “denied the fatherhood of God.”

From September 6 through early October, the assassination and slow death of president William McKinley filled the pages of the Times. When the slayer, Leon Czslogosz, said Emma Goldman inspired him, Harrison Gray Otis — president, publisher, editor of the Times, and vice president of the Associated Press — went on a rampage against anarchists in general, and dangerous women like Goldman and Tingley, in particular.

According to the Times, Tingley was a tyrant responsible for “gross immoralities practiced by the disciples of spookism.” She said Americans were “overfed,” so her followers ate so little they became “ethereal.” She said Spot, her black cocker spaniel, was the reincarnation of William Q. Judge, former head of the Universal Brotherhood. “The most incredible things happen in that lair.”

Along with her claim that Christianity had become mere “churchianity,” the most disturbing was that the “Boss Spook” ordered children taken from their parents at a very early age. “There can be no question about a mother’s love,” Tingley wrote, “but sometimes by this very means mistakes are made that affect the mind of the young so materially that their power for good becomes dwarfed…by loving but unwise mothers.”

“Let me have a child from the time of birth until it is seven years old, and all the temptation in the world will not move it.”

At Lomaland, Tingley separated children from their parents shortly after they were born. Infants had a teacher/Godmother “day and night” so there was “no break between school and home life.” Parents could visit their children once every two weeks.

On October 8, William E. Griswold took the issue to court. He alleged that Madame Tingley detained his 16-year-old daughter, Bertha, “against her will.” When Bertha’s mother died in January, instead of moving to Denver to join her father, she stayed at Lomaland. In the courtroom, Griswold approached her, touched her arm, and asked, “Do you remember your papa?”

“Keep your hands off me, sir!” she shouted.

On the advice of Griswold’s attorney, judge E.S. Torrance dismissed the case. After the trial, the Los Angeles Times escalated its attacks.

No Times story offered proof until October 28: “Outrages at Point Loma: Women and Children Starved and Treated Like Convicts.”

Though situated on “the most beautiful spot on earth,” the colony was a “place of horror.” Armed men guarded the inmates and locked them in cells at night. The children “have been taken away to the child-pen and are never allowed to communicate in any way with mother or father.”

This “forced separation” included husbands and wives in “Tingley’s clutches.” Break her “iron rules” and you face hard labor, solitary confinement, and starvation.

A Mrs. Leavitt, a “believer in the true school of theosophy,” collected the information from Mrs. Neresheimer and Mrs. Hollbrook. Both “well-to-do Eastern women” had been “rescued” from Lomaland. They said Tingley “is just a “common, dollar-taking spirit medium.”

All the quotations were second-hand. The Times didn’t interview either woman.

That night, Tingley spoke at the Fisher Opera House. The local ministers who had banded against her are “catspaws in the hands of my enemies. Some day I shall publish a list of the Christian ministers who have been in court on the charge of adultery. I have learned more of the vileness of human nature since I came to the Coast than I ever knew before!”

Lomaland is not “a living Hades of immorality,” she said. All accusations come from a “gigantic conspiracy” determined to destroy “the Autocrat Tingley” and her vision for humanity. She vowed to sue the Los Angeles Times for libel. Owing to delays, the trial didn’t begin until December 1902.

When she did relief work in Cuba after the Spanish-American War, Tingley befriended Emilio Bacardi, mayor of Santiago and member of the rum dynasty. With his consent, she began bringing Cuban orphans, one or two at a time, to her Raja Yoga school on Point Loma.

In October 1902, Tingley “imported” nine boys and two girls between 5 and 10. Mayor Bacardi “must have had great faith in the regenerating power of Theosophy,” writes Emmett Greenwalt, “because a shipboard photograph reveals a wild-looking band of urchins.”

They sailed from Cuba to New York under the care of Gertrude Van Pelt, M.D. and Theosophist. At Ellis Island, authorities locked them in a six-by-twelve-foot room for immigrants with infectious diseases. The room was vacant except for two cots and a crusty, brown-stained sink.

According to the New York Sun, on November 1, thousands of vehement Cubans shouted hate-filled slogans, burned American flags, and ordered the U.S. government to return the children at once. If not, the Spanish-American War would re-ignite.

A board of inquiry conducted a hearing. Vernon M. Davis, president of the New York Society for the Prevention of Cruelty to Children — known as the “Gerry Society” — urged they go back. Though he admitted it was hearsay, Davis claimed that Point Loma was “financially irresponsible” and “morally incompetent.” Such a vile “atmosphere” was no place for children.

The next day Albert Spalding, Theosophist and former commissioner of Major League Baseball, told reporters about conditions at Ellis Island. That same day, the New York Tribune announced there were no demonstrations in Cuba. According to a cable from Santiago, the children “left town under the most pleasant circumstances.”

On hearing the news, the board improved living conditions but kept Mrs. Van Pelt and the children incarcerated.

Spalding demanded to know who was behind the multi-pronged attack. The board refused to answer. Instead, they scheduled a second hearing for November 5.

Vernon Davis produced a surprise witness: commodore Eldridge Thomas Gerry. Though his title came from yachting, not the military, Gerry founded the Society for the Prevention of Cruelty to Children. He was famous for pontificating and, according to the Dictionary of American Biography, “would tear children from their parents merely to gratify an officious and meddlesome disposition.”

Gerry cross-examined Spalding: does Madame Tingley call herself the second coming of Christ? Does she teach her “Little Lotus Buds” that “shrubbery and plants marry and produce children”? Does her “little black spaniel Spot” house the reincarnated soul of a human being?

Spalding objected. He and Oluf Tyberg, also at the hearing, had children at the Raja Yoga School. Spalding said the accusations were ridiculous.

Louis F. Fitch, former bookkeeper at Lomaland, said Madame Tingley “is bent on going to posterity as a second Christ, if not a greater. She will stop at nothing to gain her ends.”

If anyone from Lomaland testified against her, Fitch added, Tingley would take “occult revenge.”

For the next five weeks, while the 11 children remained at Ellis Island, Tingley requested an official investigation of Lomaland. Four delegations responded, including Mayor Bacardi to see for himself.

Fearing biased assessments, Tingley invited California governor Henry T. Gage and Samuel Black president of the State Normal School. They observed the children, audited classes, often with less than ten students per “god-parent.” They heard students playing beautiful, hand-made musical instruments. They marveled at the glass-topped architecture and “spotless interiors” of Lomaland, and noted an overall discipline, almost to the point of severity. Governor Gage told the San Diegan-Sun that conditions gave no indication of the charges “of cruelty, immorality, or lack of financial support.”

After his inspection, Frank P. Sargent, U.S. Commissioner General, submitted a five-page report to president Theodore Roosevelt. He saw healthy children (no skin or eye diseases “so frequently found in such institutions”), immaculate buildings and grounds, and a “physician always on duty.” The “learning capacity of three- and four-year-olds” impressed the most. They recited lengthy poems and speeches with perfect diction and obvious comprehension.

Back at Washington DC, Vernon Davis grilled Sargent about Madame Tingley’s moral character. The school was “financially able to take care of the children,” Sargent replied. “They should be allowed to go there.”

The Cuban children were free to go.

“After we saw the futility of trying to get them to listen to any evidence,” Davis told the Providence Journal (12/8/02) “we withdrew.”

Commodore Gerry was a powerful man on the East Coast. He hated to lose — at cards, or in court. Though all reports were favorable, Albert Spalding suspected that if the children set foot in New York, the “Gerry Society” would arrest them or even have the Society for the Prevention of Cruelty to Children board the ferry en route and snatch them into custody.

So Spalding had a plan. On the day of their release, Dr. Van Pelt handed papers, signed by Mayor Bacardi, to authorities at Ellis Island. Spalding chartered an expensive yacht. On a foggy morning, he picked up Van Pelt, his wife, and the children at the dock. They set out east across Upper New York Bay toward Manhattan. Then he turned “hard a-starboard.” The craft made a slow loop and steered toward the nearby Jersey City wharf, where 12 men, each over six feet tall, awaited. Members of the Spalding Athletic Club, they escorted the children to the train station in Jersey City.

After over two months’ incarceration, a fog-smuggled escape, and a cross-country, smoky jounce on a train, the fear of capture remained. William C. Bowers, former congressman and port collector of San Diego, who joined the group at Jersey City, learned that New York had seven warrants for the arrest of the children. If caught, they would remain in custody until they came of age.

How far did the conspiracy extend? Bowers said they might “never reach the West Coast.” Although they had train tickets to Los Angeles, and then to San Diego, Bowers ordered the train to stop at Colton, California. “We’re getting out here,” he told the conductor.

The party rushed across the tracks to the Santa Fe depot. Bowers ordered an engine and a car “as quickly as you can make them move!” A half hour later, they were away, without setting foot in Los Angeles. As a further precaution, they had the train let them off in Old Town, not the Santa Fe Depot downtown.

Bowers arranged another precaution. From Old Town, wagons took the “weary and bewildered” children to Point Loma by the long route, via Ocean Beach, not the popular La Playa trail. As the children neared Lomaland, it looked strangely familiar: the mystical towers and long spires shooting to the heavens resembled those at Ellis Island.

The next day, San Diego gave them a welcoming parade. Led by the City Guard Band, the children rode in open carriages from the Santa Fe Depot up D Street (Broadway) to the Isis Theatre on Fourth. Bowers gave a speech. “I am not a Theosophist, neither a Protestant nor a Catholic, but just an American citizen believing in the civil and religious liberty of mankind.

“Someone said that when the pilgrim fathers brought the first civilization to the shores of the New World, they thanked God they had found a land where they were at liberty to worship Him according to the dictates of their own conscience. This done, they began killing Indians, burning witches, and compelling every person to worship God after the same manner they did.

“They brought with them the seeds of that religious intolerance from which they had fled.

“The Gerry conspirators failed to carry out their scheme…. The common hallucination of the bigot is that every person who isn’t like him in religious belief has no religion. Well, I think one better have none than have the Gerry variety.”