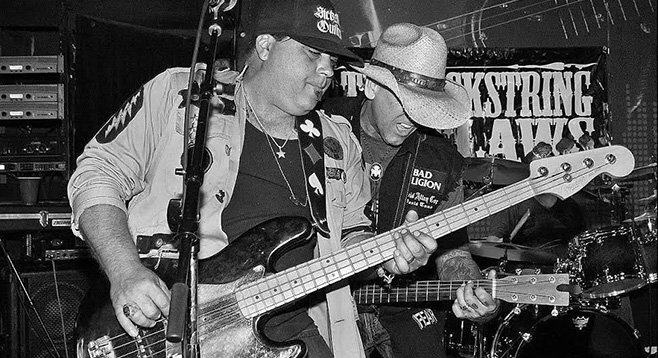 “Our best gig,” writes Drew Gino Zollo, “was opening up for a sold-out David Allen Coe show right here in Ramona.” The Sickstring Outlaws are a rugged country band based in the North County. “We have an aggressive sound,” Zollo says, “with story-telling vocals about real life, hard-working men, the day-to-day struggle with substance abuse, and some of our most favorite honky-tonk heroes.” (“I like Merle Haggard, and I like to get stoned,” Zollo sings to a wall of perfect country harmony.) “We don’t try to sugar-coat anything.”

Bakersfield being the hometown of their lead singer Ron Houston, Zollo says they favor that particular country influence as well. The Bakersfield sound is antique, having come to pass during the late 1950s in California as a revolt against the over-produced country coming out of Nashville. Its main heroes are Buck Owens, Merle Haggard, and in later years, Dwight Yoakam.

Zollo, a fine bass player, got my attention recently when he posted on Facebook that he was studying with an old high school classmate of mine, the jazz bassist Gunnar Biggs (as well as another bass player named Bunny Brunel). “It has been a wonderful experience to be able to sit down with these players and get into their minds and see how they view their instruments and some of the important aspects of theory and feel that they apply to their playing,” he says. “Not to mention stealing a riff or two.”

With a release date targeted for early September, the band (which includes Zollo’s brother Jimmy on guitar and harmonica player Lance Dieckmann) is recording their second full-length album, Electric Moonshine. “This band is on semi-constant tour,” Zollo says, “because we play anywhere from 4 to 12 shows a month. We work hard. We live to play live.”