Note to world: People are tired of war 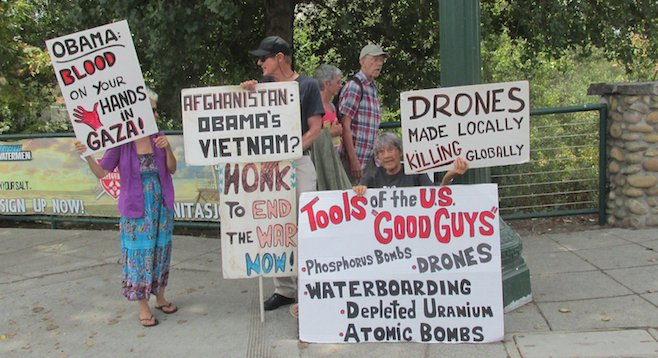 On July 27, just as they have every weekend afternoon for the past five years, several Encinitas residents held protest signs at the corner of Coast Highway 101 at Encinitas Boulevard.

The unaffiliated collection of self-described “children of the ’60s” displayed messages of anti-war and social injustice. Three regulars identified themselves as an atheist, a Buddhist, and a socialist.

The small group said they started speaking out when the U.S. invaded Iraq in 2003. Faith Attaguile said their position was very unpopular at the time. “I think a lot of people agreed with us but were afraid to speak up because it was seen as un-patriotic,” she said.

Walter Lehmann said the mood is changing: people are tired of war. “When we first started, motorcyclists would flip us off; now we get horn honks.”

Attaguile stated that what they do every weekend is what Americans are supposed to do, “Stand up and speak out — dissent — even if we know it's unpopular,” she said.

This past weekend, the group’s signs focused on the current military conflict between the Israelis and Hamas-led Palestinian area in the Gaza Strip. The group was clearly against Israel’s military attacks.

With Israel equaling the population of San Diego and Orange counties, and the country’s length being about the same as from San Ysidro to Santa Barbara, with a maximum width the distance from San Diego to the Imperial County line, I asked the group what they would do if rockets were occasionally launched into Encinitas from a bordering country.

Attaguile explained that she believes the Palestinian aggression is the fault of the Zionist government of Israel, one that has restricted the freedoms and human rights of Palestinians in the Gaza Strip and the West Bank.

I asked again, “So, rockets from a bordering country are landing in Encinitas, blowing up buildings near where we stand. The people driving through this intersection are now dead. What do we do, right now, to stop it?”

The only direct answer I got from someone in the group was, “There is never a cause for war.”

As an example of why Palestinians feel the need to fight back, Attaguile believes, are the “600 Israeli checkpoints.” They don’t bode well for freedom of movement and commerce for people in the region — such as farmers not being able to get their crops to market, or restricting medical aid, supplies, or food.

She says she speaks first-hand, having visited the Gaza Strip in 2010 on a humanitarian mission. She was with a group of 500 aid workers from around the world, which delivered 200 vehicles to be used for emergency and medical purposes. Each vehicle was filled with medical supplies and food.

Egypt granted permission to take the vehicles through the Sinai Peninsula into Palestine. However, the Egyptian government allowed the group only 36 hours in country, if they were to return through the Egyptian border crossing.

During her brief visit, Attaguile said she saw deplorable human conditions and suffering — such as bombed-out buildings that couldn’t be rebuilt due to lack of materials.

While the group said they are accused of being anti-Semitic, they do believe in Israel’s right to exist. However they say Israel has illegally occupied territory since its founding after WWII. The group wants a freed Palestine — an independent state.

Of their weekly protests, the Encinitas group points out that they have been at the Coast Highway intersection since way before the well-publicized “Occupy Encinitas” movement joined them. Since the “occupiers” disappeared, Lehmann said they hadn’t had a reporter visit them in two years.

Fact-checking footnotes: An Israeli non-governmental religious organization, B'Tselem, reported in September 2013 that Israel reduced its number of checkpoints, from a 2011 high of 522, to 99.

Canada, Egypt, the European Union, Japan, Jordan, Saudi Arabia, and the U.S recognize Hamas as a terrorist organization; however, Iran, Russia, China, Turkey, and other Arab nations say that Hamas is a humanitarian organization.

If they were politically correct it would be easier to sympathize. No war is Obama's. Who let Bush and Cheney do whatever they wanted? They both should've been charged with war crimes.

Before there were Hamas rockets, there were kidnapped and murdered boys from both camps. And there are more and more Israeli settlements in Palestinian territory. And more and more Hamas tunnels into Israel. And a gigantic wall separating Jews from Palestinians and an Iron Dome (whatever that is) and tanks and aerial bombardment of densely-packed urban areas in Gaza and bombs falling near the Tel Aviv international airport and enough mindless intransigence all around to plunge us into a world war.

So I'm grateful to those pacifists up in Encinitas for their weekend vigils. And good for Israel for whittling away at the number of humiliating, inconveniencing and frightening Israeli military checkpoints: only 99 more to go.

The "dome" is interceptive rockets that take out the incoming; sophisticated enough to tell if something will hit them, or they can let go because it is heading into uninhabited area, saving the cost 63,000 per I believe it was, CNN.

Didn't explain it right, If the rocket coming toward them will eventually do damage or is off course. Shouldn't be firing rockets, doesn't solve anything. Russians shouldn't be shooting down passenger planes. Someone explained that (crazy) reverts back to old behavior they are comfortable with. Bang bang.