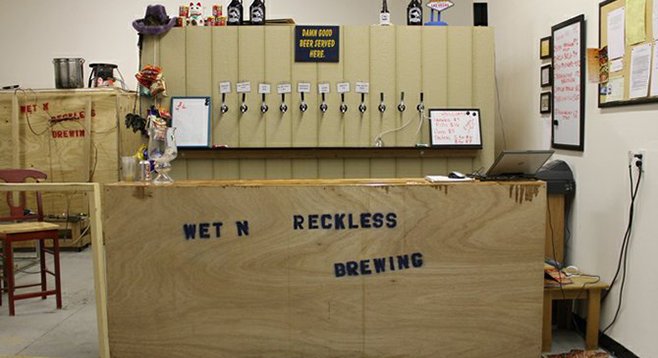 A fire broke out in the tasting room at Wet ‘N Reckless Brewery (10054 Mesa Ridge Court, #132, Mira Mesa) the night of July 27, causing significant damage. According to reports, repairs were being made at the business when the blaze started. Sixty firefighters reported to what evolved into a two-alarm blaze and spent a total of 40 minutes putting it out. The fire spread to at least one other suite in the business park Wet ‘N Reckless occupies, but the extent of that damage has yet to be confirmed.

Firefighters identified an errant welder’s torch as the cause of the fire. This was confirmed by Wet ‘N Reckless owner Dave Hyndman, who said he was brewing all day but left the brewery for roughly an hour, during which the fire started. When he returned, black smoke had engulfed the building, so he called 911. According to Hyndman, he lost everything. There is no word on whether or not he will rebuild.

This is the second fire to touch the local craft beer industry. Two months ago, Ritual Kitchen & Tavern, a beer-centric restaurant in North Park, fell victim to arson when unidentified suspects broke in, doused all four corners of the restaurant with gasoline, and set it on fire. It has since reopened.

We started a Go Fund Me to help with the rebuilding process. Check it out: http://www.gofundme.com/caqcos

The official Kickstarter is here https://www.kickstarter.com/projects/1680137130/rebuild-wet-n-reckless-brewing