A host of activists organized by clergy members active with the Interfaith Center for Worker Justice gathered downtown on Tuesday morning, July 22. The group showed up to lobby mayor Kevin Faulconer in support of a measure providing for a citywide minimum-wage increase and paid sick days. The measure passed last week by the city council and was immediately decried by the business community.

The group displayed a mock check payable to Faulconer for $1560, the monthly income of a full-time minimum-wage worker. "Can you live on this?" was written in the memo line. A similar tactic was employed with councilmembers in the lead-up to their 6-3 vote.

"Who can live on that in San Diego? No one," said rabbi Laurie Coskey, the Interfaith Center's executive director. "The truth is that by paying your bare essentials, you are falling more than $500 in debt every single month."

Coskey later demonstrated, ripping the mock check to symbolize payment of taxes and rent, leaving less than $300 every month to cover food, clothing, transportation, and medical costs for a typical San Diego worker.

Jessie Thomas used to work as a tipped employee at a Starbucks franchise, where she said her tips averaged $1.17 per hour, bringing her take-home pay in considerably under the $28.74 hourly median touted by the restaurant industry at last week's city-council meeting; restaurateurs argued for a separate, lower wage for workers who receive customer tips. Thomas says she now works at a small restaurant, where her wages average $11 per hour, after considering tips. 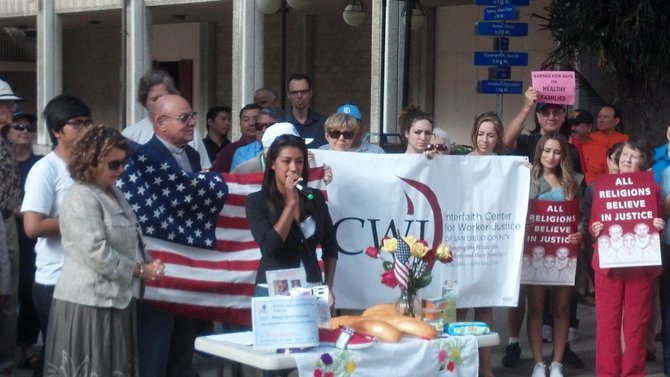 "I don't have a part-time job just to make extra money," said SDSU student Biviana Lagunas. "Every month, my family is short on rent. We have trouble putting food on the table. It breaks my heart to see my mom go to work sick, to see my teenage sister having to take care of my brother while she's trying to do her homework. But now [when the new minimum wage is implemented] I'll have an opportunity to focus on my education, my mom will be able to stay home when she or my brother is sick, my sister may be able to be a teenager a while longer. Mayor Faulconer, I'm urging you to sign this ordinance."

Marcus Nichols weighed in as well: he said he's looking for a third job in order to save up enough money to stop living in his car.

"I came here thinking San Diego was America's finest city," Nichols told the crowd and members of the media. "But I don't see any progress toward making this town affordable for families. I'm struggling myself and I have to sleep in my car. It's crazy — I'm working two jobs and still have to do something of that nature." 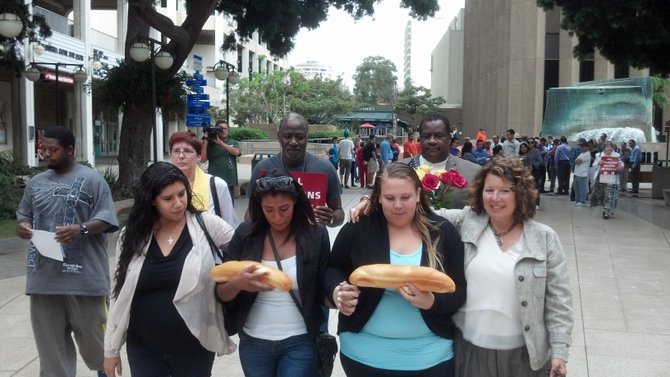 After addressing the crowd, a handful of delegates made their way toward Faulconer's 12th-floor office, bearing a handful of "gifts." Two loaves of bread were presented, symbolic of the food minimum-wage workers struggle to provide and the need to euphemistically "bring home more bread”; diapers representing a fast-food worker and mother of four who related her struggles to provide her children with basic necessities; and a flower vase festooned with an American flag for military veterans struggling with low pay after entering civilian life.

Though Faulconer declined to greet the representatives in his lobby directly, “community engagement” staffer Felipe Monroig, who previously headed Carl DeMaio's city-council staff, received the group and arranged a sit-down with the mayor, scheduled to take place this Friday.

If only these people exerted as much effort while working instead of whining for more handouts, they might actually EARN more than minimum wage.