You can’t be Guttermouth 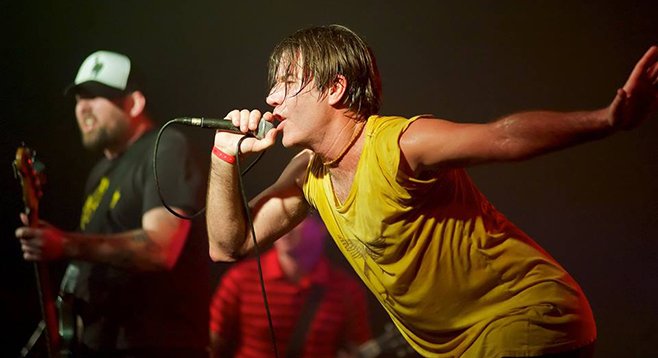 Skaters with guitars, really dirty mouths, attitude, and nary a serious thought among them. When Guttermouth was new, they had all that going for them. They appealed to a fan base with simple songs made up of those three magic power chords that, when played on an electric guitar at high volume, guaranteed stage-diving and other such punk-show stress-relievers as drinking beer and pounding one’s companions in the pit.

Guttermouth came out of Huntington Beach in 1988, on the cusp of the Orange County punk scene that was, in my opinion, the best punk scene of them all. Consider Guttermouth’s West Coast contemporaries: Social Distortion, Black Flag, Angry Samoans, Fear, and so many more of what would ultimately make California’s most important music since the surf rock of the 1960s.

Always a hot-blooded gig, Guttermouth was/is a revolving door and has had at least 15 members over its lifetime. The band’s Facebook page lists the present tour lineup as being Geoff Armstrong, Justin Van Westbrook, Adam the Woo, Ty Smith, and founding member Mark Adkins.

Now pushing 50, you have to wonder if Adkins still believes such misogyny as, “He slaves his fu*king ass off to support his rotund wife/ He’s lost his own identity and the remainder of his life.” Adkins’s ranting in particular is what the band’s core fans come for. But as an entertainer, I suppose he’s tied himself forever to the quick attention-span universe he and other punks like the Ramones helped build. Forget about long ballads, or even a guitar solo — everything about Guttermouth is down to the barest of minimum essentials. What remains is that explosive and sweaty grind from the skate-punk ’80s and whatever unpredictability will emanate from Adkins’s mouth. Did the band ever gain the measure of fame coming to them? Never, but no matter: far more famous punk bands have tried to be Guttermouth and failed.