Kim Shattuck pummel you, too? 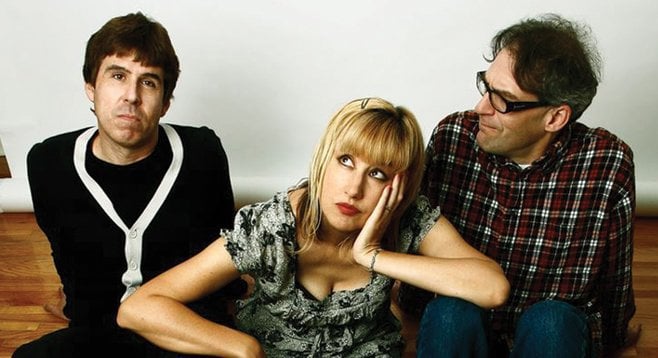 Kim Shattuck, guitarist/singer for L.A.-based pop-punk trio the Muffs, makes no excuses about her band’s lack of output over the past decade.

“There were five years between the Alert Today, Alive Tomorrow (1999) record and Really, Really Happy (2004). Now another ten years. That’s a lazy band! I am telling you we were lazy. But at the same time, if you’re not inspired, you’re not inspired,” Shattuck explains to the Reader via phone.

Sometime around 2010, Shattuck found her inspiration and a new batch of Muffs songs was born. She says she took a trip down memory lane for the occasion, revisiting many of her past favorite influences such as the Sex Pistols, the Beatles, and Blondie. The resulting album, Whoop Dee Doo, is a collection, in Shattuck’s words, of “surfy, bubblegum, melodic stuff with heavy instrumentation.”

And don’t forget about those harmonies! Shattuck says she grew up in a family filled with singers dabbling in barbershop quartets who could always be spied singing in their cars. The harmonies in her DNA give Muffs songs a specific identity that harkens back to the Fastbacks and a legendary girl-group from the Muffs’ neck of the woods. Just take a listen to “Up and Down Around” off the new disc and try not to catch that revved-up Bangles influence in there.

The band can be forgiven for the lapse in releases, since Whoop Dee Doo was basically in the can circa 2010. The album was mixed and about to be mastered when Shattuck received a call from the Pixies’ camp asking if she would be interested in auditioning for the vacated bass-player slot.

As a longtime Pixies fan, Shattuck considered the invite an honor. She loved playing the old songs, even though learning them on bass was tricky since many were disjointed and incorporated “weird time signatures.” She eventually worked them out, though. How to adapt her voice to cover Kim Deal’s old parts was a trickier assignment.

“The part of singing stuff wasn’t hard,” Shattuck explains, “but I have a completely different tone to my voice than Kim Deal. They went back and forth wanting me to either try to sound like her or not sound like her. There was all this experimentation. I was, like, ‘I’ll do whatever. I’ll be a team player.’ I tried to sing my own way, but quiet. Sometimes they wanted me to do my screamy, harsh voice and I was, like, ‘Really? Are you sure?’ We went back and forth during the tour. They kinda wanted me to be myself musically, but to pay a little homage to Kim Deal. On the old stuff I totally want to sound like that because it would be weird having my grating, aggravating-sounding voice on ‘Here Comes Your Man.’ It would be really awkward.”

Shattuck ended up playing on one tour with the Pixies, but her tenure left her thankful for the strong relationship the Muffs have nourished since the current lineup solidified in 1995. Anyone who has seen the 2006 Pixies documentary loudQUIETloud knows that the band may not be the best at airing their grievances.

“It’s funny, I remember saying, ‘Wow, is the movie even true?’ They said, ‘Oh no, they edited for effect’ and stuff like that. But after I got to know them a little bit, I was, like, ‘No, the movie’s true.’ We [the Muffs] communicate with each other. We do not do the not-talking thing. People that don’t talk are constipated. I’m sorry, but if you can’t communicate, what do you have? You have nothing. They’re horrible at talking to each other about stuff.”

The Muffs have played several San Diego shows over the past 20 years. Shattuck reports a particularly fond memory of obliterating a local audience one night while she was breaking in a 100-watt Hi-Watt amplifier.

“It was so loud that the crowd just stood there and looked like deer in headlights. We literally pummeled the shit out of the crowd with my big, loud amp and nobody could move at all. We thought they didn’t like us. It turned out we were so loud that they couldn’t move. They were in shock. Catatonic because of it.”

Shattuck continues, “It was un-godly. I still have it. It’s in the garage and I don’t even think I could sell it. I swear to god. My friend was working for the Who not that long ago and I said, ‘Hey, ask Pete if he wants to buy my amp.’ And he was, like, ‘Nah, he doesn’t even want a 100-watt amp anymore.’”