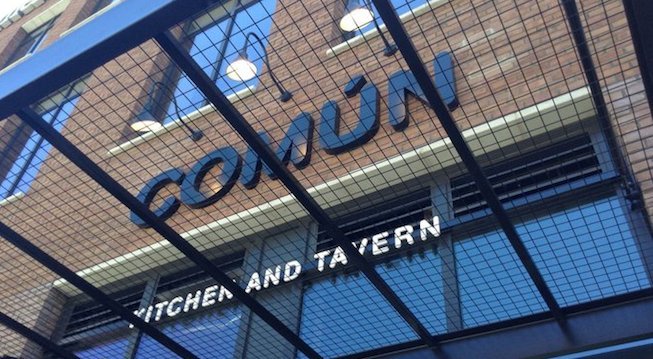 The octopus tentacle sticks up purple and angry out of the roiling mass of pink and white quinoa, and the green and yellow and red wall of heirloom tomatoes. 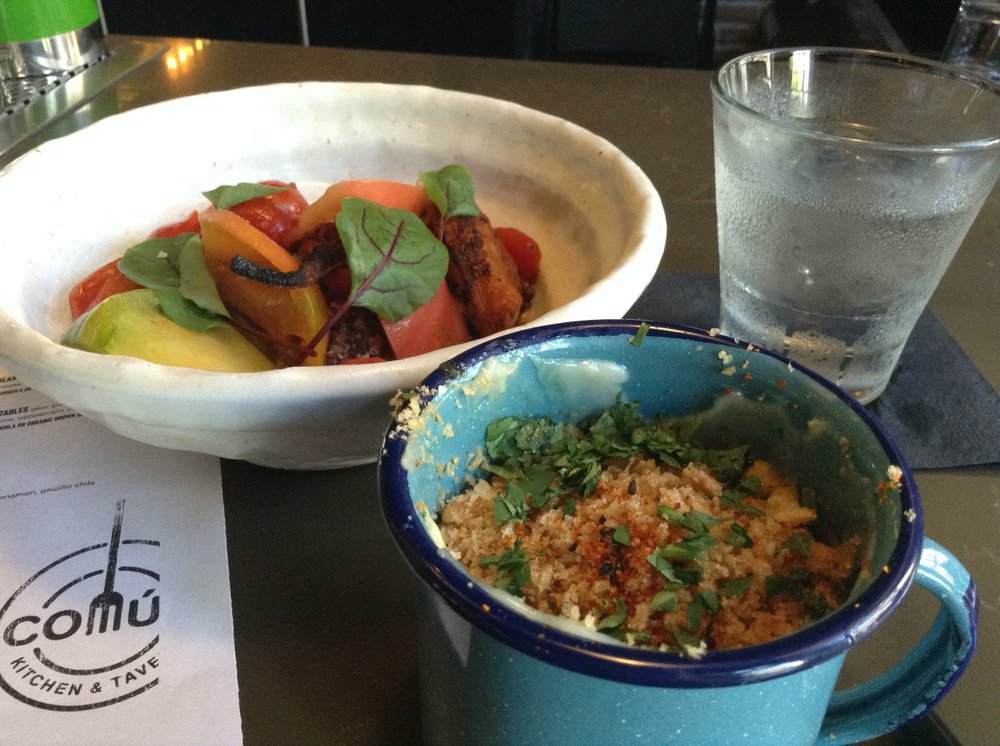 In the enamel mug beside it, elotes, corn, sits under a pile of chicharrones — fried crumbles of pork skin.

And I'm about to dig in.

What's the big deal? This is at the long-awaited Chad White restaurant, Común (Spanish. Think "community," "commons," "in common.") Today, Wednesday, is Day One.

I was going by yesterday when I saw all the patio heaters out. Plus people and street furniture. Knew something was afoot. 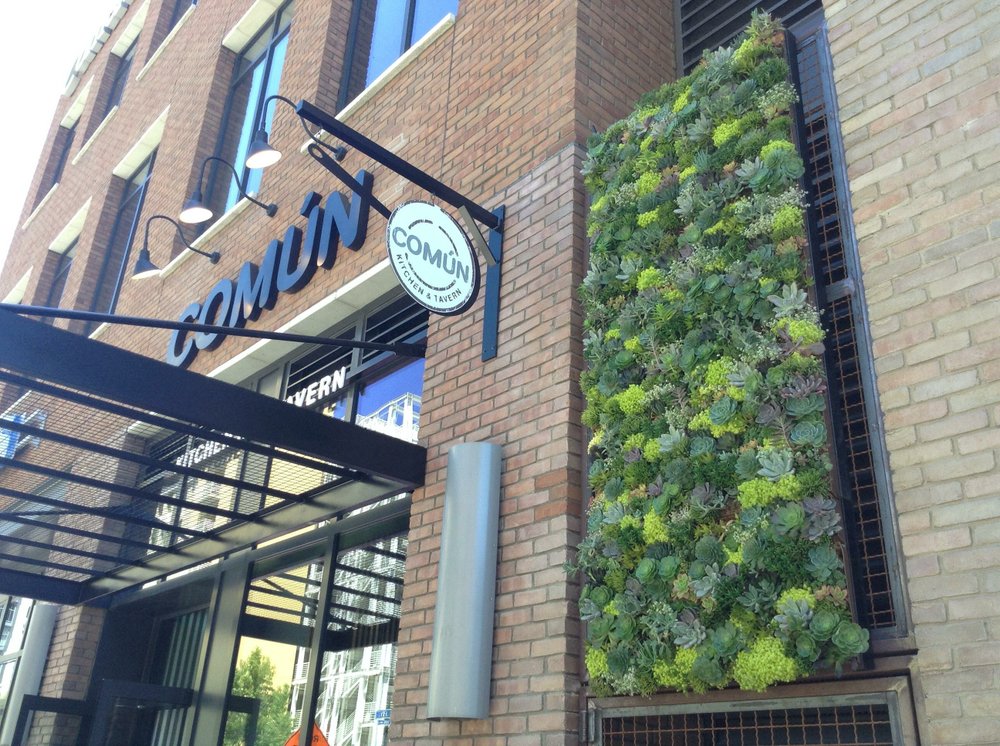 So, here I am back again and sitting up to the first bar inside, while outside on the blue couch, fellow chefs, looks like, have come to pay their respects to Chef White. There's a formality to it. It almost makes you think of the Godfather movies, though no kissing of hands, and this is a meeting of equals come to congratulate one of their highest-profile buddies, and one of the most adventurous.

Inside's planky, bricky, with exposed brown ventilation tubes and other pipes snaking about the ceiling. They have a cooler pantry that has glass walls, so we can all see what they have in stock. Towards the back a counter juts out with worktables behind. That has to be the chef's table where you can sit and watch and talk with Chef White as he prepares your meal. No extra charge, they say.

Me, I sat down at the first bar and checked the lunch menu Estefania gave me. It had a short lists of dishes at different price points. Like, in "snacks," ($5) you get items like cucumber in vinegar with pickles, or elotes (corn with mayo, lime, butter, chicharrón and cilantro). Seven bucks buys you "toastadas" loaded with ceviche, octopus, smoked shark, carnitas or grilled chicken. They even have a bunch of açai bowls for $10, and $12 gets you salads, like, chicken with okra, octopus with tomato, steak with green beans, or veggies with veggies. 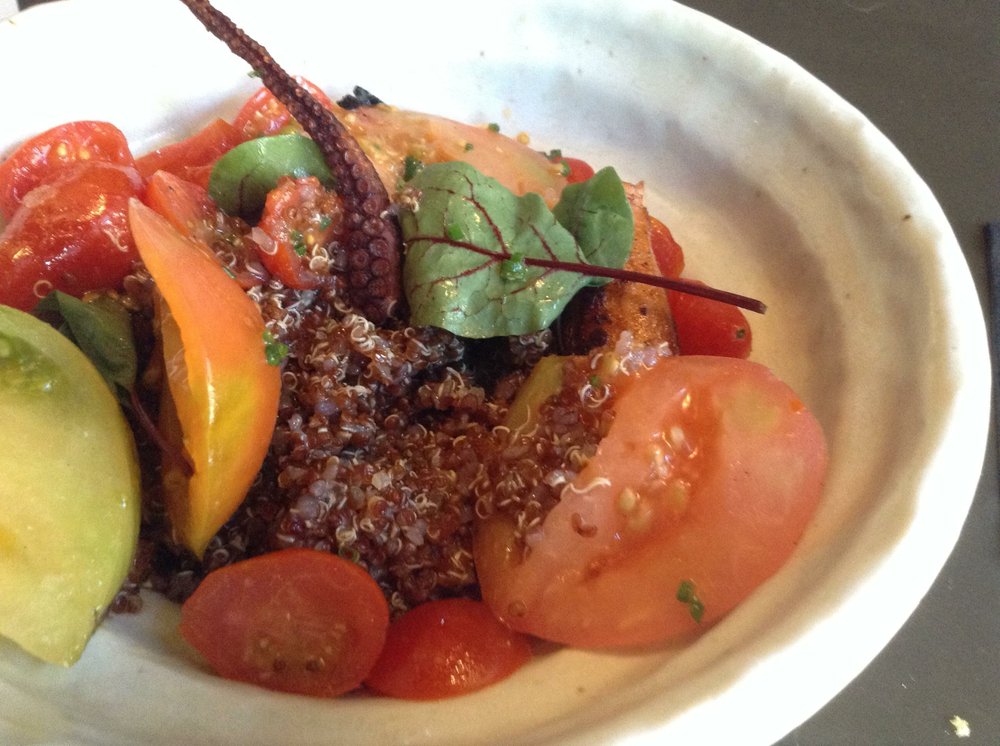 I go for the elotes, for starters, and then the octopus salad. Octopus has a nice burned fishy flavor, but actually is a little chewy. Tomatoes are red, orange, yellow, green, a great sight, but tastewise, still tomatoes. Most interesting part in the salad has to be the underground sea of quinoa, the Bolivian superfood, all pink and white and with a pretty nice savory taste. 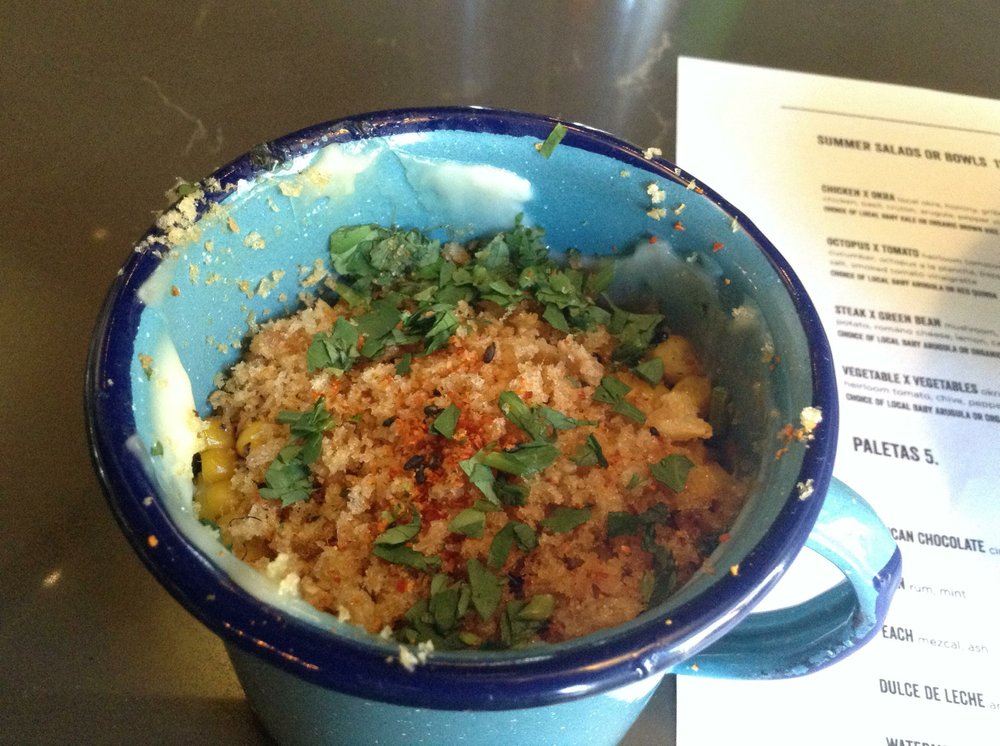 But the most interesting part of this short meal is the enamel mug of elotes. The corn's good, mainly thanks to the porky, peanuty, savory taste of the chicharrones that turns this modest snack into such a (surprisingly filling) cupful.

Still, today is really more about the buzz. Staff's trying to keep it smooth, customers are trying to see who else is here. I'm trying to see if I could afford this place. I hear they've got a happy hour in the works. That would be good. 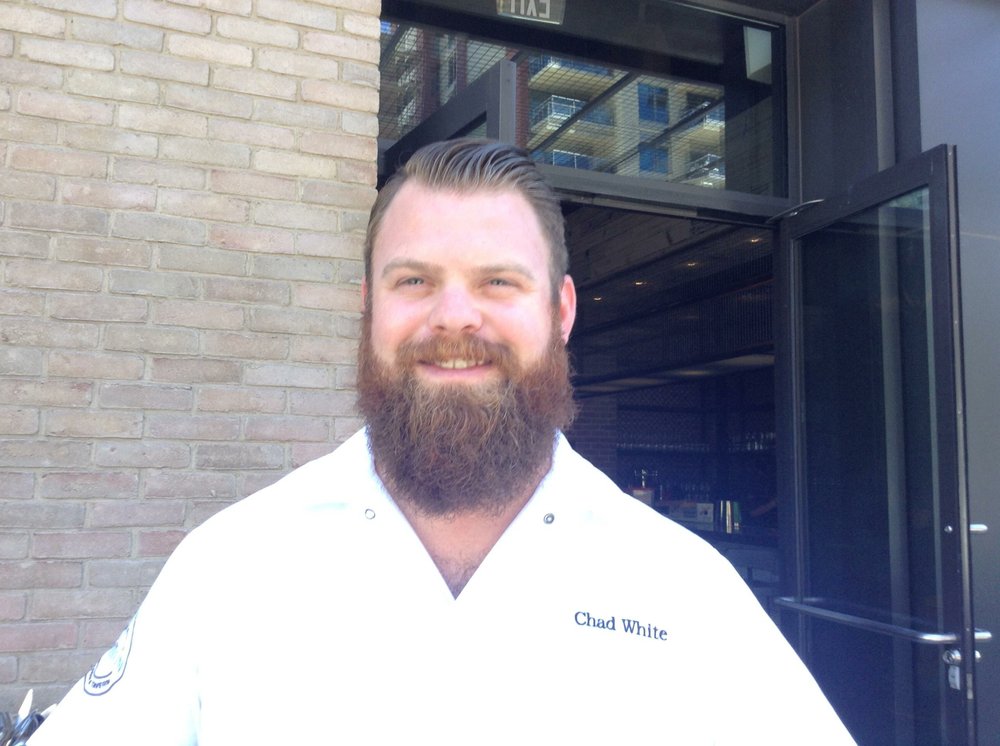 On the way out, I run into the man himself, Chad White. "What we're doing," he says,"is bringing Mexico north. Not the schlocky cliché of the past, but this culture that's going back to its own roots of local, Asian and Mediterranean influences. Baja Med! I'll try anything as long as it is sustainable."

And yes, he does want this to become the neighborhood of East Village. So you can just pop in for a drink, if you want. No "Eat, or out!" mentality.

I hope it works, because I really want this south-to-north adventure of his to be, well, sustainable.