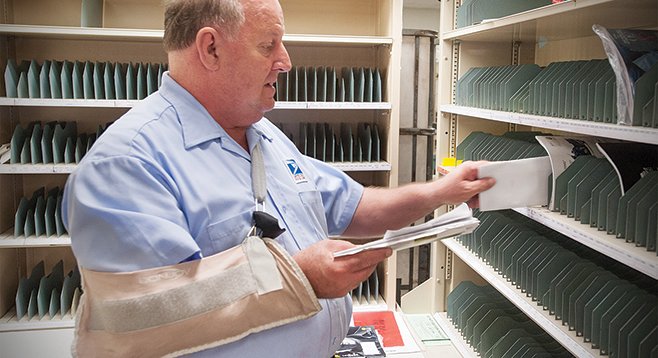 In recent years, two such attacks were fatal. An Oceanside carrier named Eddie Lin died of head injuries in 2010 after a Rottweiler knocked him to the ground. In 2012, Escondido letter carrier Diane Jensen was mauled to death by a pit bull. Last year, Manuel Siso came to within millimeters of death when a 70-pound pit bull on his mail route broke through a chain-link fence. 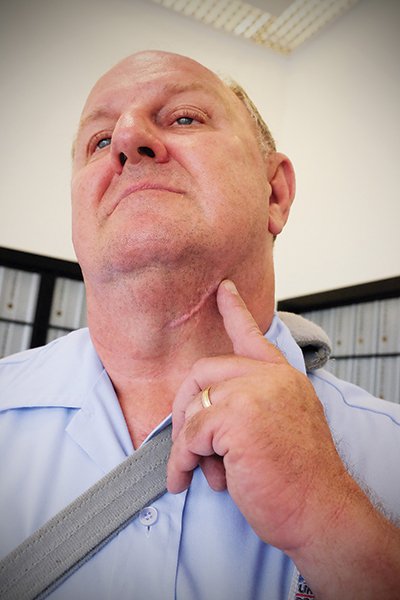 With its first bite, the pit bull put a wound two inches deep in Siso’s neck and came millimeters from severing his jugular.

“The dog came straight at me, hit me in the face, and knocked out teeth.” Despite having had plastic surgery, a scar is visible on Siso’s neck. “The throat was where the bite first went in. It was about two inches deep. According to the plastic surgeon, it missed the jugular and my esophagus by millimeters.” It took four surgeries to repair the damage to Siso’s neck, his arm, and his teeth. “There’s another surgery coming,” he says. “The implants aren’t taking.”

Siso is 60. He sorts mail with one hand at the Encanto post office; his other arm hangs in a sling. “I had a torn rotator cuff from the effort of fighting the dog off.” Doctors put him on light duty. Might he go back to walking a route one day? “That hasn’t been determined yet. I’ve still got issues. The problem is when I see dogs or I’m surprised by dogs, I go through episodes of…” his voice trails off. He shuts his eyes and pauses for a moment before he picks up the thread. “I saw a dog attack in a movie, and I had three or four days of nightmares afterwards. I get heart palpitations.”

Almost 4.5 million Americans are bitten by dogs each year. The American Veterinary Medical Association, the Humane Society of the United States, and the American Academy of Pediatrics report that small children, the elderly, and mail carriers are the top three most frequent victims.

“Every other bite I’ve had before this has been superficial,” Siso says. He can remember getting bit at least five times. It goes with the territory, is how he sees it. He says other letter carriers at the Encanto post office have likewise been bitten. “I’m talking about where people have needed stitches.” 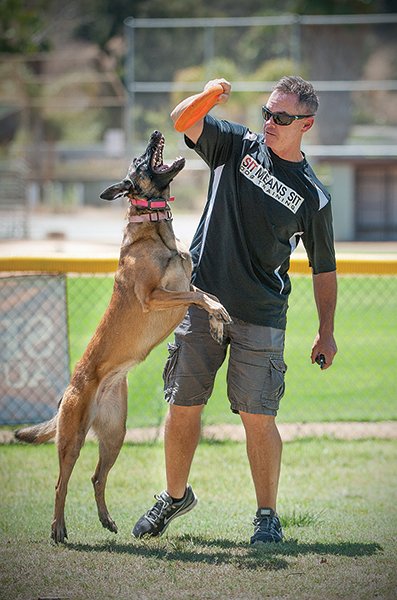 “How many of you have been chased and attacked by a dog?” Tim McMillan asks a group of letter carriers assembled in the parking area of the Southeast post office on Logan Avenue. The show of hands is almost unanimous. “And how many of you were bitten?” This time, about half as many hands are raised. It is 8 a.m.; a neighbor watches from across the alley.

McMillan owns Sit Means Sit, a San Diego dog-training company. Each year he donates his time to train postal workers to keep from getting bitten. Manuel Siso had the training. He thinks it may have saved his life. “Don’t judge the dog,” McMillan says. “All dogs will bite. Ankle-biters are some of the most vicious.”

A trainer named Allen Burnsworth is with McMillan today. “You know what the number-one biting dog in the country is?” he asks the group. “Not pit bulls. It’s chihuahuas.” Later, the two will say they think the reason for the higher numbers of dog bites in San Diego is due in part to the weather. “There are more warm days here, and dogs are outside.”

Officials chose the Southeastern post office for safety training today because statistics from the Department of Animal Services show that letter carriers in Logan Heights suffer more dog attacks than elsewhere in the county. City Heights was a close number two, followed by nearby Encanto. Angel Elazegui manages the Southeastern post office. Why more bites in his neighborhood?

“It seems like every house here has a dog,” he says. “I feel they are a form of burglar-alarm system.”

Today the trainers brought along a high-energy Belgian Malinois breed named Flash. Flash is trained to attack on command. The handlers stage numerous scenarios in which they escape from Flash by using a mail pouch as a shield.

“Now who wants to take a bite?” McMillan asks the half-moon circle of blue uniforms. Joaquin, a carrier of average height and build steps up. He slips on a padded arm sleeve and he waits. When Flash hits the arm-target, the force of it spins Joaquin around in a circle.

“If a carrier gets injured in a dog attack, that’s the end of that owner’s mailbox.” San Diego postmaster Ken Snavely is at the training. “When a letter carrier is attacked by a dog, they’re not gonna deliver the mail to that address anymore. You can get a PO box or we can resume delivery once you prove that the dog has been removed from the property. In the old days we’d give a second chance, but that didn’t work out very well.”

Yes. “But pepper spray usually only works on a family pet, not a guard dog or an aggressive dog. And certain dogs aren’t affected by pepper spray at all. Pit bulls are one.”

This year, to date, he says there have already been 31 bites to San Diego letter carriers (compare to last year’s 53 bites). “I don’t think we’ve really put our finger on why the increase,” says Snavely. But he thinks it’s across the country, not just here. “San Diego was ranked number two in the U.S. last year. We’ve dropped to number four, but not because we’ve reduced bites. It’s because other places are even worse.”

Dan DeSousa is deputy director of the County Department of Animal Services. He says there were 2496 total reported bites within their jurisdiction in San Diego last year. “1105 were adults, 457 were elderly persons, 150 were teenagers, and 381 were children.” 403 persons of unknown age made up the balance. He says the official policy is this: any dog bite that breaks skin must be reported, even if it happens during play. “The dog doesn’t have to be barking and chasing you down.” Why? It’s about rabies prevention. Even though he says he hasn’t seen a case of rabies in a dog or cat in San Diego during the 25 years he’s been with Animal Services, the State of California has declared every county in California a rabies epidemic area. “They don’t want to take any chances.” Following an attack, the biter must be quarantined for ten days.

“If we witness an attack, we will issue a citation. If not, the victim can pursue a private person’s arrest.” The victim and the dog owner each file incident reports that are forwarded by Animal Control to the county prosecutor. “A dog-bite victim also has the right to sue for medical bills and damages.”

Per his attorney, Manuel Siso is not allowed to discuss whether or not litigation is pending. For now he’s trying recover some peace of mind.

“There’s a dog that looks exactly like the one that attacked me on the street where I live [the actual attacker was euthanized last year.] It’s causing me major problems. I can’t go for a walk in my neighborhood. I’ve seen that dog loose twice.”