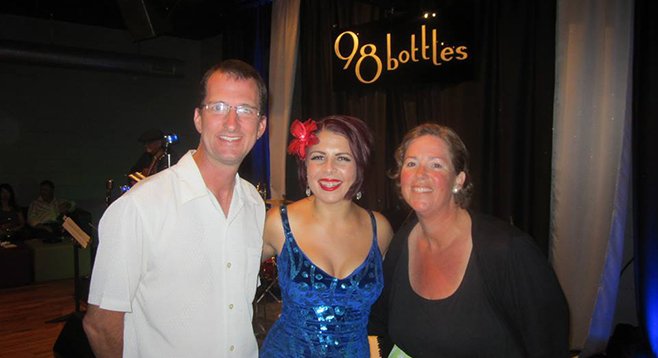 It’s almost one month to the day before the next Loving Local Music and Local Food fundraiser when organizer LJ Livingston checks in with the Reader. Things are moving along, she says. “I’m finalizing all the details and repurposing jewelry for gifts for our VIP guests.” Then she says about half of the tickets have been sold thus far. Is she nervous?

The benefit is in its third year. Staged at Driscoll’s Wharf in Point Loma, it combines gourmet cooking and live music (the Bayou Brothers, Michelle Lundeen, Dane Terry, Whitney Shay, and Leilani Kilgore are slated to perform), hence the long-winded name. “If we have a sellout, I expect to raise $9000. That doesn’t include the silent auction — we raised an additional $4000 last year,” she says, all of which went in the form of a donation to Jazz 88.3.

“In fact, for the first two years the money went to them,” Livingston says. Both she and her husband Brent are fans of the City College radio station. “But when we looked up their financial statements online and saw that their donations were in decline, we decided to create a benefit. It worked. So we did it again, and we raised even more money for them.”

But this year Jazz 88.3 gets zero. Instead, all proceeds will be divided between a local educational program, Blues in the Schools, and Slow Food Urban San Diego. Why the change? Livingston describes herself as “just a mom with two kids” as a means of underscoring the amount of labor needed to pull an event the size of LLMLF together. She says she appealed to the radio-station staff for some volunteer manpower, but when little was forthcoming, she looked elsewhere.

“We had a meeting with [Jazz 88.3 general manager] Mark DeBoskey. In January, we let him know that we planned to share whatever profits with another organization that could get us some volunteers.” But DeBoskey wanted all or nothing, she says. “We were shocked. Why wouldn’t he want half of the money? It’s a sad thing for us, because we love Jazz 88.”

Ticket prices range from $40 for the cocktail party only, upward to $160 apiece for the full VIP experience, which includes music and dinner with “celebrity” hosts including the Casbah’s Tim Mays, critic George Varga, deejay Jim McInnes, and this story’s author. “The chefs are all local,” Livingston says, “and the liquor and the beer are local. Everything is local. The mushrooms,” she says. “Everything is from within a hundred-mile radius.”