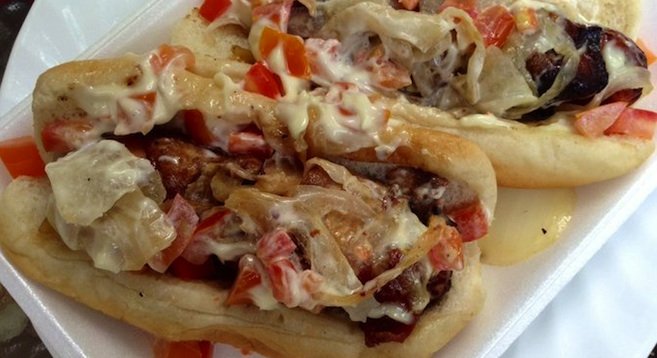 I had big plans.

Was going to catch the #2 up to South Park, get a pizza to take home to Carla, from that place with the coolest terrazza in town, Buona Forchetta. And maybe grab a sunset beer while I waited.

Except — many-a slip 'twixt cup and lip — on my way to the bus stop, I passed this food truck setting up right at 25th and C, in the forecourt of a taxi repair outfit. 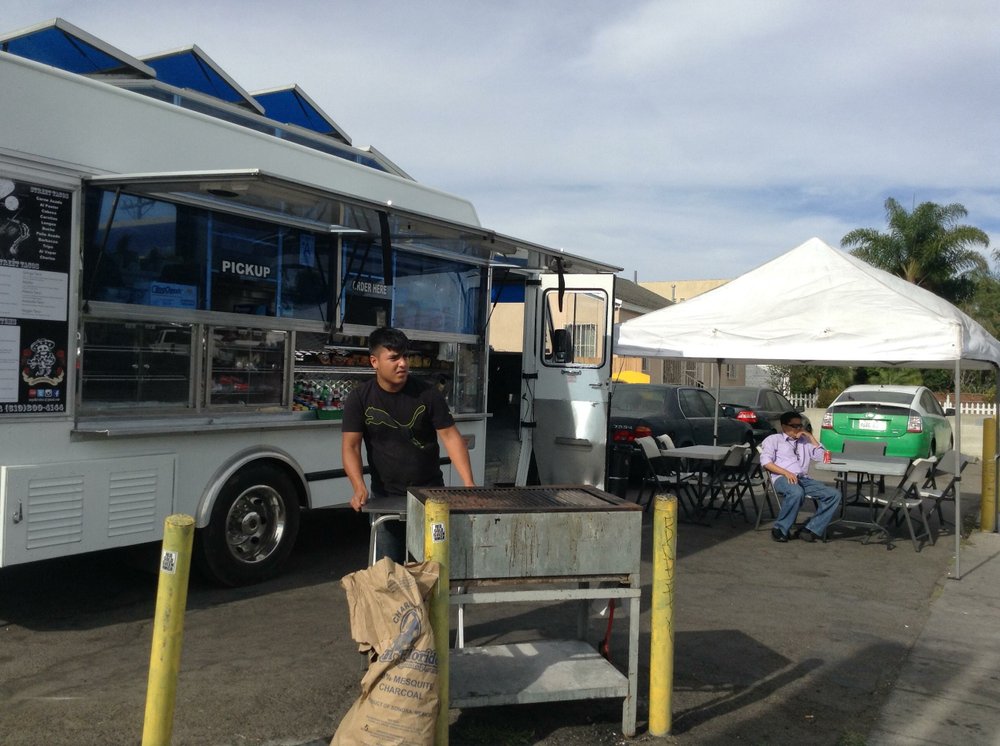 And I see they have tables in the shade of a kind of tent they've set up, right there. Plus the guy's stoking up the red hot coals of a grill by the sidewalk. Oh, yeah. He's going to put onions, beans, peppers to roast on top. Man. Thought the health authorities had clamped down on all that outside cooking. But just maybe it's so great here, they've had a rethink.

Whatever, the sign says Street King Tacos, and they have a complete line-up of tacos, from fish to shrimp to beef to a stand-alone avocado taco, to a mulita (melted cheese between two tacos, with meat, onions, cilantro, guac on top). Three bucks each, for most of them. 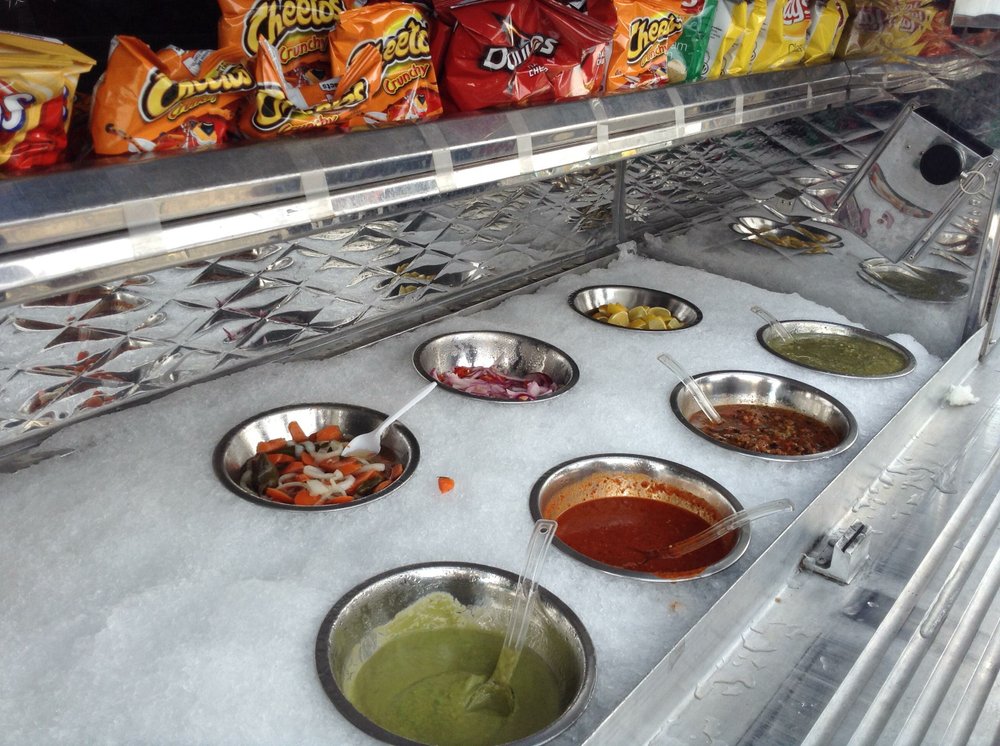 So I order ye old fish taco, and then a California taco. This is interesting, because California burrito everybody knows. Carne asada and French fries and guac. But the taco version, guess I'd never seen it. This one comes with sour cream, cheese and pico de gallo as well. He gives me the two for $5.

Then again, they're also doing hot dogs. The beautiful Carla can never get enough of those doggies. So hey, maybe add dawgs to go and forget going up to South Park for the flatbread?

I start looking at the dogs. The TJ one's the obvious choice. Bacon-wrapped, plus tomato and grilled onions. That's a go. Then again, the SD Dog has all that plus chorizo and avocado slices. So maybe one of each? 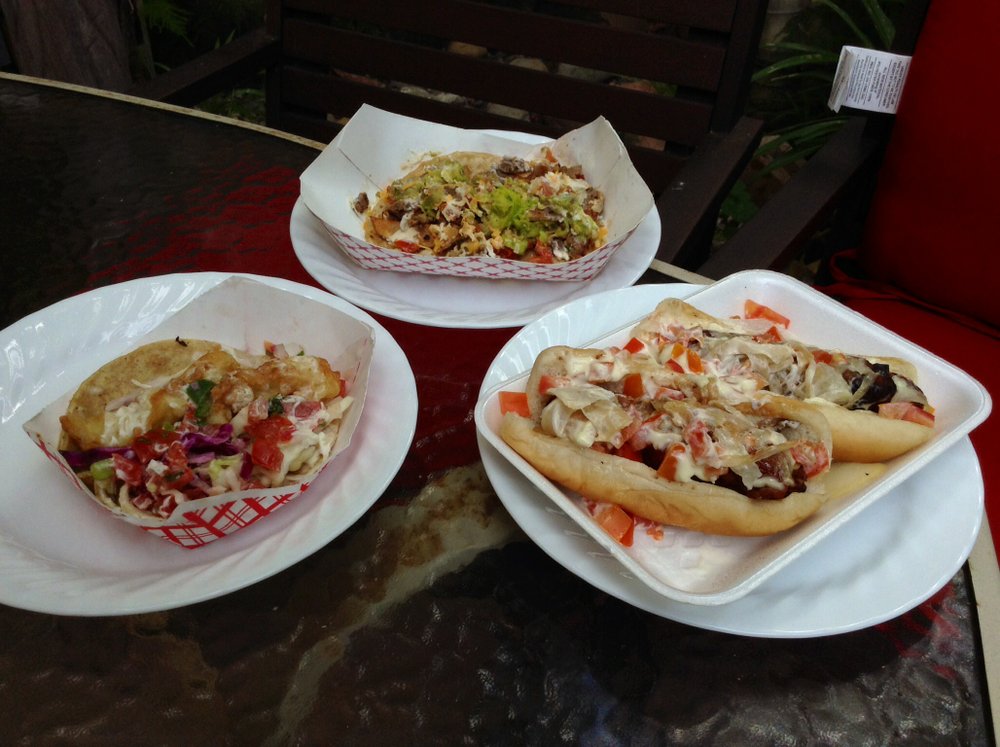 Great. He didn't have to do it. So, farewell South Park, hello street food!

Ten minutes later, I have this wad of food. I long to just sit down under the tent in the setting sun and have at it. But no. This is for sharing with Carla. Hey, bringing home the bacon, right? Wrapped around the dogs. 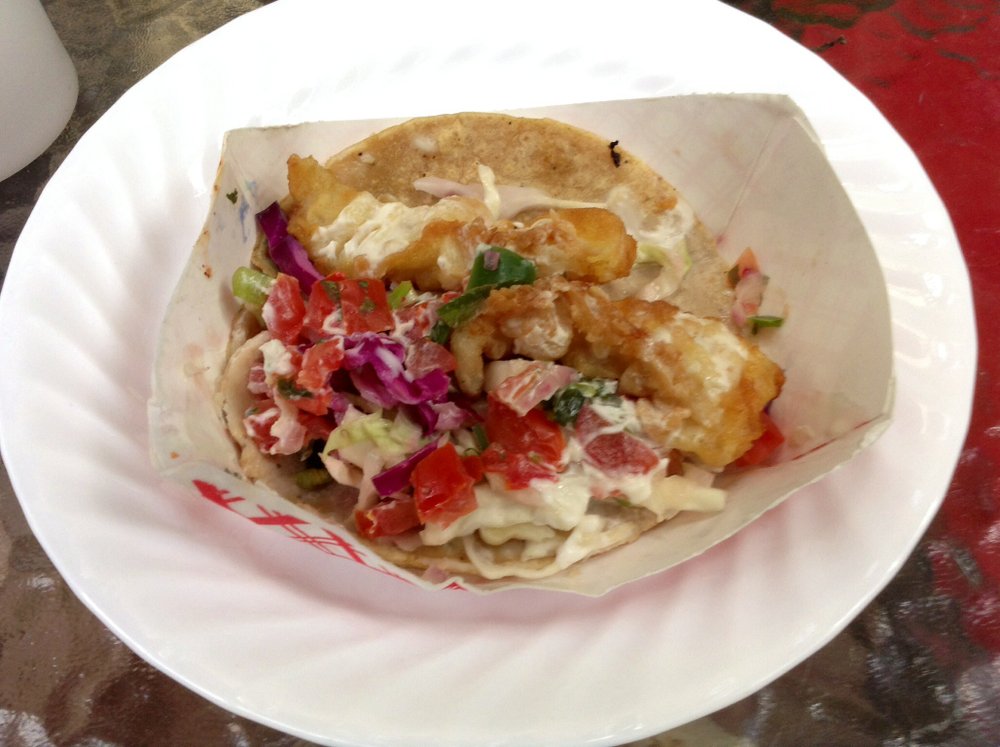 I jump on the first bus home. We race to taste each of the four while they're still warm. The two I like best are the SD Dog, with the bacon plus chorizo and avo, and the fish taco, just because it's so crispy and lush in a fresh raw salad of red chopped tomato, red and white cabbage, and green peppers. Salsa Bandera! Because the colors look like the Mexican flag. Aka pico de gallo, the Rooster's Beak. (Never heard a good explanation for that one.)

Carla makes a grab for the California taco (just because she has always been a California burrito freak), and we end up splitting half of each of the hot dogs. We agree that the SD Dog wins with its bacon-chorizo-avo combo. Luscious.

"But next time, dahls, let's do this together," she says. "There, on the spot. These things have got to be hot, fresh off the grill."

She has a point. Plus, when you're there, you get the bonus of the roasted beans and green onions from the outside grill.

According to Angel, the owner, they've been at their location ten months. Can't think how I've missed them all this time. ETA next visit? Oh, ten hours?