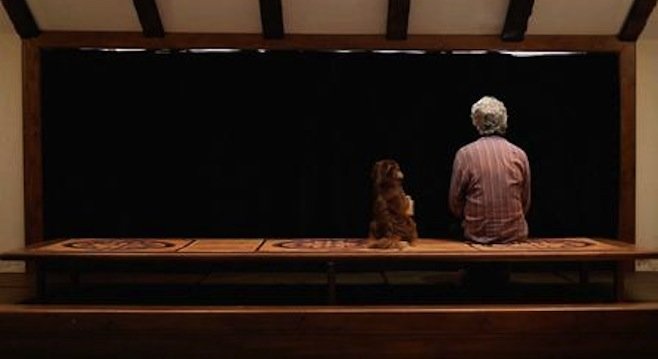 Closed Curtain arrives with more than its share of baggage. Do yourself a favor and spend a few moments reading up on filmmaker Jafar Panahi’s plight before taking in his movie. The Iranian government has placed the master director under house arrest for six years — with an additional 20-year ban on participating in any part of the filmmaking process — on the grounds that he freely pursued artistic expression.

Panahi gingerly plots the groundwork for Curtain’s first half with a three-minute-long opening take reminiscent of a similar establishing shot from his Crimson Gold. Kambuzia Partovi, the film’s co-director, stars as a writer who, along with his dog, Boy, practices his craft at Panahi’s beach house while the director is ironically out of town. His first act is to cloak all the windows to prevent outsiders from looking in.

Amid a mirrored crazy quilt of framed posters from movies past, the curtain lifts and Panahi appears suddenly and unexpectedly halfway through the film. His arrival is the most dazzling in-camera special effect of the year. With it comes there is a noticeable shift in tone, as everything that follows plays like serrated bites of a surreal fever dream. 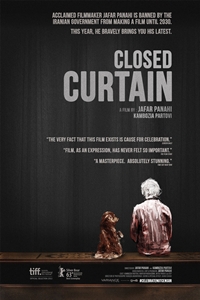 Panahi can’t stop making movies. It’s as if he’s physically incapable of setting aside a camera. Any camera! Closed Curtain follows This Is Not a Film as the second self-reflective movie-within-a-movie the director has produced while in exile, and what he achieves with a cell phone and consumer-grade video equipment will awe and inspire.

The film screened as part of last year’s San Diego Asian Film Festival. Halfway through I sensed it was destined to top my ten best list. The local first-run art houses treated it like an escapee from a leper colony. All hope of a commercial release appeared lost until now. Please show your appreciation for the Media Arts Center’s Digital Gym by helping to sell out every show.