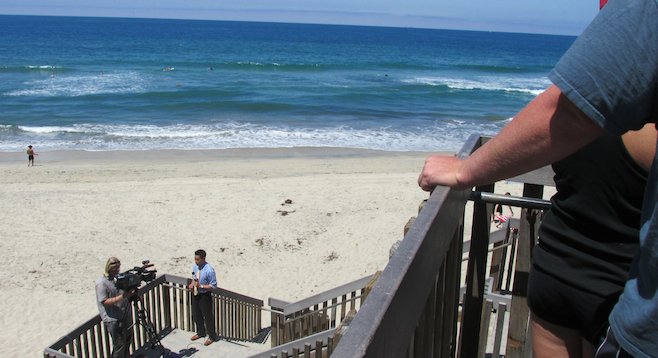 At around 6:00 a.m. on July 10, a body was discovered floating in the shallow water on an Oceanside beach. The 911 call came from two surfers as they prepared to go into the water at end of Cassidy Street, at South Pacific Street.

By 8:30 a.m., the family identified the body of 21-year old David Velasco of Vista. He had disappeared around 7:45 p.m. the night before, at Carlsbad State Beach near lifeguard tower #38, at the beach’s northern boundary.

Velasco and his 18-year-old brother had been just splashing around in the shallow surf, wading out into not much more than knee-high water, according to a lifeguard that saw them just prior to the guard’s tower closure at 7:00 p.m.

Lifeguards announced to all on the beach that the towers were closing and suggested that swimmers exit the water. “We can’t make them leave,” said state beach spokesperson Robin Greene.

Unfortunately, it appears the brothers may not have understood English well enough to heed the warning. The younger brother admitted neither one knew how to swim.

According to Greene, at around 7:45 p.m., a big set of waves crashed behind the brothers as they were trying to run to shore. They both went under the water; Velasco’s brother could not find him when he surfaced.

With lifeguards still packing up their gear for the night at their nearby headquarters, Greene says they had lifeguards in the water seven minutes after receiving the emergency call. Air support was overhead prior to sundown.

The state park’s initial search involved additional fire and rescue lifeguards, including boats and divers, from Del Mar, Encinitas, Oceanside, and Solana Beach. The search was called off about two hours later, yet the Coast Guard continued searching offshore until 1:00 a.m.

While normally North County beaches have a southward current, conditions change daily. Velasco’s body was found about two miles north of the site where he disappeared. Greene said there was a one- to three-mile-per-hour current flowing north at the time. While, the coroner will make the final determination, lifeguards said it appeared there was no trauma to the body.