From blushing bridegroom back to cold-blooded killer

Iago plays on Othello’s fears like a maestro on a Stradivarius. 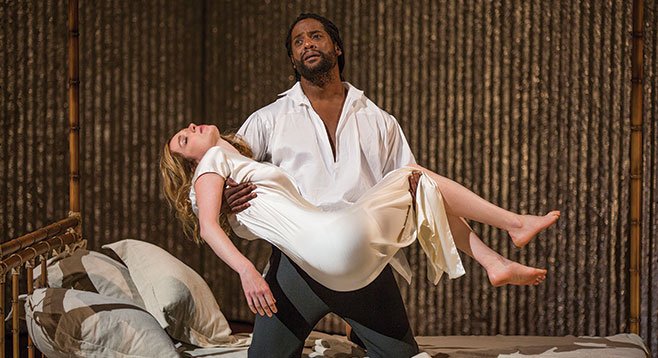 Iago: “Men should be what they seem. Or those that be not, would they might seem none.”

Othello: “Certain, men should be what they seem.”

I was re-reading Shakespeare’s Othello recently, and the obvious poked through: Iago is really good. Not in a moral sense. He’s resolutely evil, a “demi-devil,” and quite possibly un-killable, since Othello’s angry sword can’t pierce his heart. Iago’s “really good” in his tactics and how he crafts Othello’s arc. The Moor regresses from blushing bridegroom back to cold-blooded killer. Iago plays on Othello’s fears like a maestro on a Stradivarius.

Iago: “I see, sir, you are eaten up with passion. I do repent me that I put it to you.”

Which, of course, inflames the Moor all the more.

Iago is an “ensign” in Othello’s army. He only has one duty. When the soldiers charge into battle, he must lead the way, unarmed, holding the company’s colors high. In effect, he’s the biggest target on the battlefield. He will bring honor to himself by doing his duty without flinching — even as he falls and dies and soldiers stomp over his remains.

He’d much rather be a lieutenant. Let the fodder sprint into smoking cannons. But Othello gave that title to Michael Cassio, whose merits are suspect, at least to Iago. So he’ll take down Cassio and put his general’s “perfect soul” to the ultimate test.

We’ve seen all manner of Iagos: some as emotionally deformed as the Hunchback of Notre Dame is physically; drooling sadists; and the occasional, effective split between a congenial surface and the “I am not what I am” catacomb of evil. Richard Thomas is certainly a fine actor. He speaks his speeches trippingly and never resorts to showy theatrics: smoke never puffs from his ears or nostrils. But his Iago is all surface. He’s so relaxed and completely in charge that obstacles tumble before him. More impish than devilish, he gets laughs, lots of them. In his asides and soliloquies, he’s our buddy. But wouldn’t the real Iago hate us, too?

For much of the play, the audience sides with Thomas — or possibly with John-Boy, the character he played in The Waltons. In either case, the Old Globe’s Othello unfolds more like a comedy with a sad ending than on a headlong, tidal wave of tragedy.

An urge to entertain gets in the way. Roderigo, a Venetian gentleman whole-hog in love with Desdemona, is just a buffoon. Talented Jonny Orsini stumbles around like a boneless clown with few chances to register any serious emotion. He’s no match for Iago. Nor, in a strange way, is Othello.

Blair Underwood wears slender dreadlocks and gives the Moor a Jamaican accent (you half expect him to say “I-and-I smoke ites to Iration, mon”). Underwood has the athletic swagger and the vocal chops for the role, though he uses mannered gestures to indicate size: for the line “Blow all love to heaven,” he kisses both hands and flings them at the sky. But why is Othello, one of the mightiest warriors on the Mediterranean, so quick to fear infidelity? Why distrust Desdemona while their wedding cake’s still fresh? He’s at his best in tempests, climbing “hills of seas Olympus-high,” and far less amid the “calm winds” of peacetime. Othello may have as many motives as Iago (among them distrusting “too much of joy”). But the comic Iago flattens Othello’s strengths too readily.

Othello and Desdemona are obviously in love. But have they made love? The scholar/critic Harold Bloom, among others, says not yet — which might explain the Moor’s volcanic jealousy. Director Barry Edelstein takes the opposite tack: the newlyweds kiss and hug at every turn.

In some ways, Shakespeare made Desdemona a mirror. People read into her what they want to see. Kristen Connolly plays a well-spoken, “honest” Desdemona but misses her dilemma. Franz Kafka could have written her: she’s committed a mortal sin yet hasn’t a clue what it was. Without drifting into melodrama, Connolly could stress Desdemona’s perplexity and, in the end, fight more for her life.

Noah Bean heads the supporting cast as the gravely wronged Michael Cassio. Of all the performers, Bean speechifies least and is the most convincing combatant in the unconvincing, by-the-numbers fight scenes. Angela Reed’s Emilia effectively balances Iago’s brutal misogyny — women “rise to play, and go to bed to work” — with a blunt, #Men counterargument: “Let them know/ The ills we do their ills instruct us so.”

Edelstein’s casting Erin Elizabeth Adams as Bianca, Cassio’s mistress, is an intriguing choice. Adams is African-American. Cassio/Bianca matches Othello/Desdemona in reverse. When the soldiers at Cyprus turn on her, racism inflames their anger, which obviously has lurked against Othello all along.