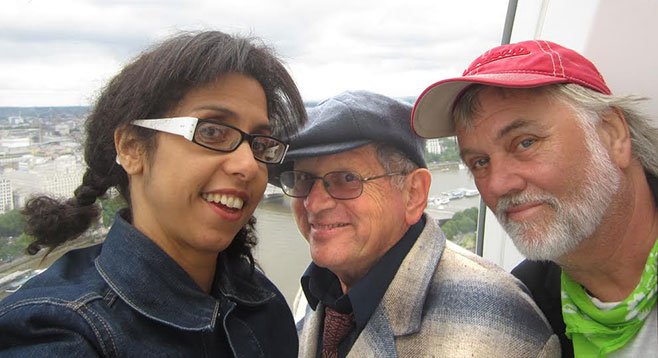 “I felt like a rock star,” bluesman Robin Henkel says about his recent ten-day stint in the United Kingdom. Henkel and his travel companion, Bayou Brothers drummer Ric Lee, played a week of club dates culminating in a slot on the Barbican International Jazz and Blues festival. The bookings came about as the result of a chance meeting at last year’s Gator by the Bay.

“Ric Lee introduced me to Mama [Katie] Tokus at Gator.” Tokus was appearing at the Mission Bay fest as the Bayou Brothers’ guest. “When I met her backstage, she asked me to consider coming over to England, where she lived, and playing some gigs with her there.” Almost one year later, that’s exactly what happened. Henkel stayed in touch with Tokus; they completed a couple of trans-Atlantic recording projects via Skype.

It turns out that Tokus also books the Barbican Festival. Henkel was not without a host of reservations: “Work permits, where were we gonna stay, what guitars would I bring, getting transportation around England... Being the queen of logistics, Mama Tokus made all that happen. She took care of everything. I finally said to myself, No one is ever going to make it this easy for me to get to England, so I went.”

The main difference between venues here and there? “In general, we got paid more over there. And even though I was main guy in the act, the bandleader, for once I wasn’t worried about all the things a bandleader worries about over here in the U.S. All that got taken away. All I had to do was get up on a stage and play.”

Henkel, Lee, and Tokus played a string of gigs — six in five days. They traveled by car to Plymouth and then to Totnes, where Tokus resides. “Totnes is where the Romans were in...what, the 1100s? Brutus of Troy named England,” he says. Henkel and Lee’s digs faced out onto the River Dart. “The Romans came up that river. And Plymouth is where the Mayflower sailed to the U.S. from. The Barbican festival stage is about 150 yards from the steps that led up to the Mayflower.”

Did Henkel climb the steps?

He and Lee are making plans to return to the U.K. next March. “Everybody said the food would be bad, but it was great.” Still, the first thing Henkel did after touch-down in San Diego was to go burrito shopping. “I went to a Roberto’s-like Mexican food place across from Les Girls on the way home from the airport.”