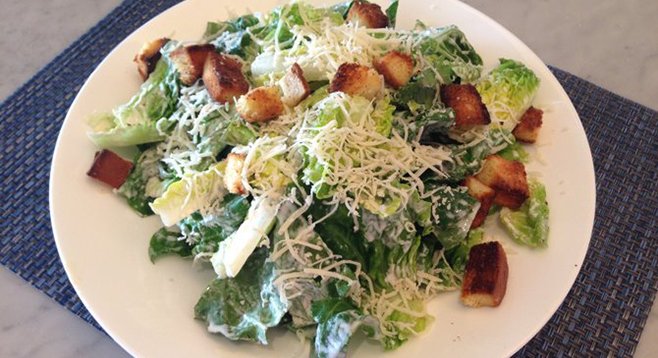 July 4 not only marks America’s 238th birthday, but, if the legend is correct, it’s also the 90th anniversary of what is arguably the region’s greatest contribution to culinary culture: The Caesar Salad.

“I think people don’t realize where it came from because it’s been around for so long,” says Jeremiah Bryant, Chef de Cuisine at Saltbox. “It’s simple and delicious when executed well. It’s the best example of a chef doing what chefs often have to do: they take a look at what is available to them and try to make the best dishes possible using those ingredients.”

Most sources credit the salad’s creation to Caesar Cardini, an Italian chef who ran Caesar’s Restaurant in Tijuana during prohibition.

His daughter Rosa once claimed her dad created the salad during a busy July 4th weekend in 1924 when a run on the kitchen left him short of food supplies. 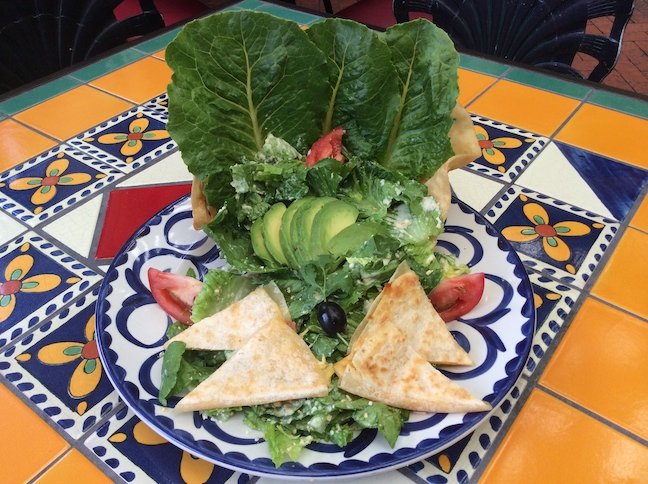 Working with what he had — romaine lettuce, croutons from a baguette, a few eggs, garlic, worcestershire sauce, and parmesan cheese — Cardini, the story goes, improvised a salad that has since become what might be called the Elvis Presley of salads.

To make a simple dish improvised at the last minute seem bigger than it was, Cardini, the story goes, made the Caesar at tableside.

“It’s an amazing dish that can cross boundaries,” says Donald Lockhart, executive chef of Cusp Dining & Drinks in La Jolla. “The thing about the Caesar is that everyone interprets it differently, but it’s a story that keeps being told, which shows what a great dish this salad actually is.”

The Hotel Caesar on Avenida Revolucion is genuinely accepted as the birthplace of the salad, and it celebrated the salad with a street festival this past weekend.

It should be noted that Cardini’s claim to the Caesar’s creation is controversial in some circles.

Some of his co-workers say they created the salad. Also, Cardini’s brother, Alex, created the Aviator’s Salad, which is similar to the Caesar, but adds a smear of anchovy paste to the crouton.

Cardini reportedly did not like anchovies in his Caesar, but some chefs like Keith Lord of the Wild Thyme Company feel they are crucial to the dish.

“A Caesar doesn’t always have to be traditional, but the egg yolk and anchovies are essential, he says. “The yolk gives the dish a rich creaminess, and the anchovies add saltiness but also depth of flavor. The two give it so much richness and dimension that cannot be replicated using substitutions. Without them, it wouldn’t be a Caesar.”

Because raw eggs can carry salmonella bacteria, some places try to use bottled Caesar-style restaurant instead. To chefs like Tim Kolanko, Executive Chef of Coronado-based Blue Bridge Hospitality, that’s an affront to the salad.

“It's not a Caesar,” he insists. “You should just call it something else.”

The salad’s deliciousness is not up for debate, but whether it’s Mexican food or Italian can make for heated discussions.

Some foodies like Steve Schackne, the food and beverage director at Hotel del Coronado, believe country of origin should dictate which cuisine gets the credit.

“All the information I have credits Alex and Caesar Cardini for this salad at the Caesar hotel,” he says. “I have to go with Mexican on this one.”

Kolanko disagrees: “The soul of the dish is totally Italian, it just happened to be created in Mexico.”

Meanwhile, Jose Duran, the Executive Chef at Casa Guadalajara in Old Town, believes the dish is big enough for everyone.

“It’s international,” he says. “Like me, born and bred in Tijuana, but made successful in the United States.”

Anywhere I can find a recipe for the "original" Caesar salad? If you tell a story long enough it become true history. But I believe this is where the salad started and the story is a true as we will ever find out. At least the salad's beginnings weren't seised by corporate interests like the fake Betty Crocker and Aunt Jemima, like Hidden Valley Ranch Dressing or McDonalds were. Ranch dressing started right here in Escondido at Hidden Valley retreat near Lake Wolford. No credit is given its beginnings. And McDonalds wasn't started by Ray Kroc, as one could read about . . .