Serious climb for a serious view

This is a challenging hike with a variety of habitats and great views. 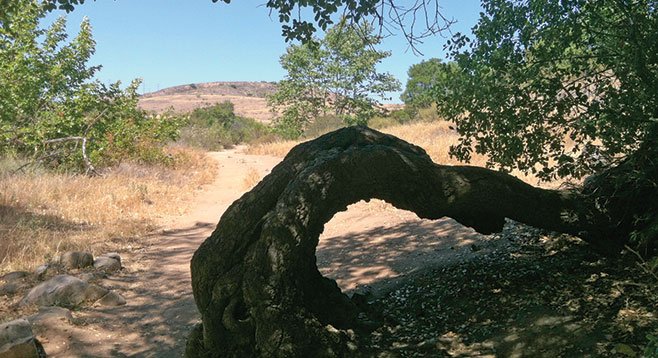 North Fortuna Mountain, at 1291 feet, is the third-tallest mountain in Mission Trails Regional Park after Cowles Mountain and Pyles Peak but the most challenging to climb because of the steep ascent and descent. The route described includes views of Mission Dam, with a quick side trip possible, a shaded oak canyon with views to the open grasslands, riparian areas, and plenty of coastal sage scrub and mountain chaparral areas with a variety of plants. 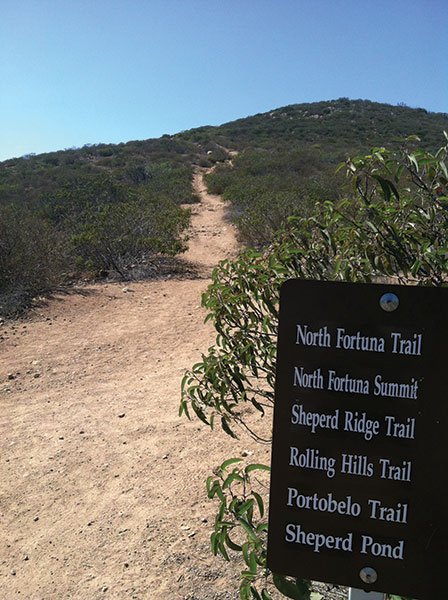 The true summit isn’t visible from the saddle.

North Fortuna is part of a long-arced mountain with two peaks that was once called on century-old maps Long Mountain. North Fortuna is separated from South Fortuna by a 910-foot saddle. This area has a long military history beginning in 1917 when Fortuna was used as an artillery target for training during WWI by the U.S. Army based at Camp Kearny, a few miles to the west. The area was reactivated in 1934 by the U.S. Marines, becoming part of Camp Elliott; ten years later, it was transferred to the U.S. Navy. Fortuna was used for tank, artillery, and infantry training for both WWII and the Korean War. After a cleanup for live ordnance, the land was transferred to the City of San Diego in the 1960s. By the late 1970s, a master plan was created for Mission Trails Regional Park. On rare occasions, live ordnance may surface after heavy rainfall and should be reported and never handled.

Hike west from the parking area past the turnoff to Mission Dam to a sign and a small footbridge over the San Diego River that leads into Oak Canyon. Several interpretive signs are found along this section of the trail. A wood fence separates the trail from the grasslands area to the east from the shaded oak woodland and riparian areas. Be careful of poison oak found under the coast live oaks. Other trees to note in this area include western sycamores, cottonwoods, and mule fat. At about mile 1.3 is the junction with the Oak Canyon North Trail to the right and the Fortuna saddle surface road to the left. Head left up this very steep half-mile route, gaining close to 500 feet in elevation at the 910-foot saddle. Take the trail to the right to head to the summit of North Fortuna. The first peak is not the true peak. Continue to the second peak at mile 2.3, which is the true summit. Look for several ammo cans nestled in the summit rocks. Write a note in one of the log books and/or read some of the entries written by hikers. Plants to note on the top include laurel sumac, mission manzanita, broom baccharis, and flat-top buckwheat. 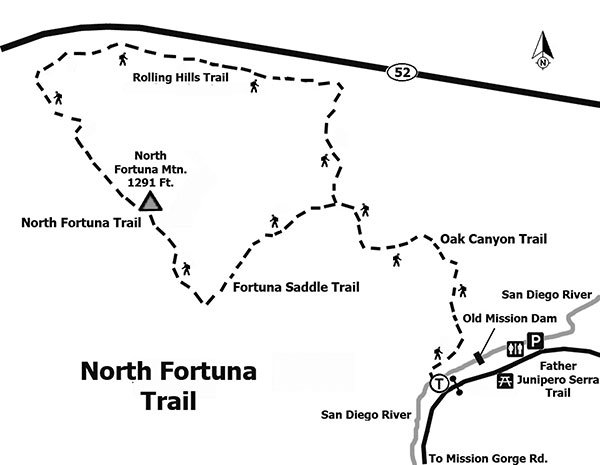 After taking in the view, which includes the flight runways for MCAS Miramar, traffic on SR-52, and the other peaks and trails in the park, begin the descent from the summit. At mile 2.93 is a junction with the Portobelo Trail heading down toward Suycott Wash or the Rolling Hills Trail that will lead to Oak Canyon North. Take the trail to the east and begin the rollercoaster descent of Rolling Hills that parallels SR-52. Extra care should be taken on this steep descent, best done with trekking polls. At mile 3.96 is the junction with Oak Canyon and the trail to the Grasslands. Follow the sign to the right into Oak Canyon North. This segment of the trail is especially delightful when water is running and there are pools of cool water. At mile 4.44 is the junction with the saddle service road and the close of the loop hike. Return to your vehicle following the original trail to this point.