How can convention centers be so dumb? 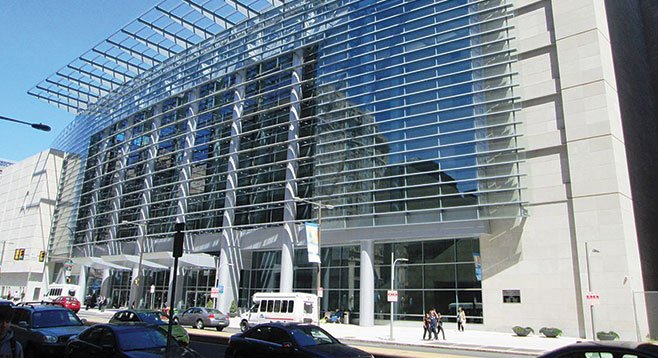 Would you take advice from a gaggle of consultants whose forecasts in the past two decades have been off by 50 percent?

Of course you wouldn’t. But all around the U.S., politicians, civic planners, and particularly business executives have been following the advice of self-professed experts who invariably tell clients to build a convention center or expand an existing one. 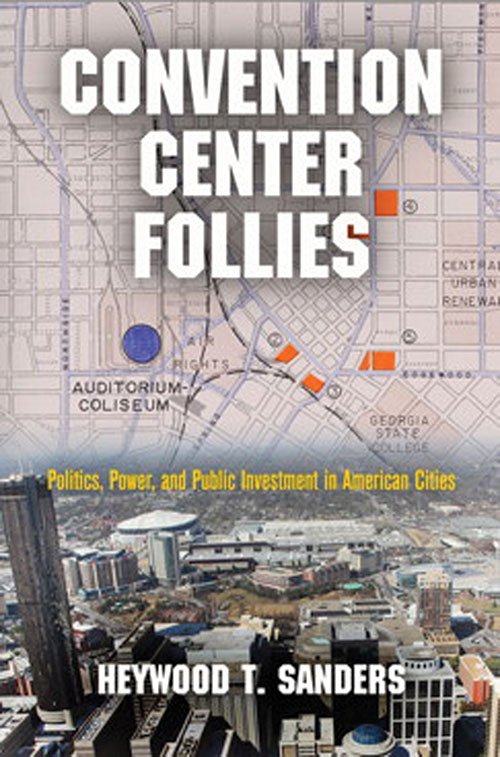 This book by author Heywood Sanders documents the financial and political insanity surrounding convention centers around the country.

A remarkable new book, Convention Center Follies: Politics, Power, and Public Investment in American Cities, published by the University of Pennsylvania Press, tells the amazing story of how one American city after another builds into a massive glut of convention-center space, even though the industry itself warns its centers that the resultant price-slashing will worsen current woes. 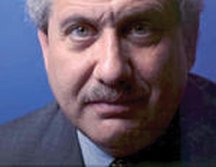 The author is Heywood Sanders, the nation’s ranking expert on convention centers, who warned of the billowing glut in a seminal study for the Brookings Institution back in 2005. In this new, heavily footnoted, 514-page book, Sanders, a professor of public administration at the University of Texas/San Antonio, exhaustively examines consultants’ forecasts in more than 50 cities.

Nashville was told its new center would result in 466,950 hotel room nights; it’s getting around 267,000 — “a little better than half [what was projected],” says Sanders in an interview. Philadelphia isn’t garnering even half the business that was promised.

“Getting half the business [that was projected] is about the norm,” says Sanders. “The actual performance is a fraction of what it is supposed to be.”

Yet, in city after city — including San Diego — self-appointed civic leaders listen to and act on these faulty forecasts. In almost all cases, mainstream media and politicians swallow the predictions whole without checking the consultants’ miserable track records.

San Diego’s convention center — like others around the United States — is slashing prices by 40 to 50 percent to its customers but wants to build a $520 million expansion, claiming it aims to fulfill demand. But supply swamps demand — the reason for the deep price-cutting around the nation. Since the year 2000, trade-show space has grown from 52 million to 71 million square feet, while attendance has been about flat.

But such warning signals are not flashed by consultants, who are paid fancy prices by cities. Who are these error-prone consultants? They are units of major accounting firms, such as Pricewaterhouse-Coopers, KPMG, Ernst & Young, and Deloitte & Touche. Then there are private purported research firms such as C.H. Johnson Consulting and CSL International. They crank out so-called studies for cities with the same conclusion: build! Often they use the same verbiage: “They are remarkably adept at saying exactly the same thing to other cities in exactly the same words. Much of the study for Anaheim was word-for-word from the study for Baltimore,” says Sanders. 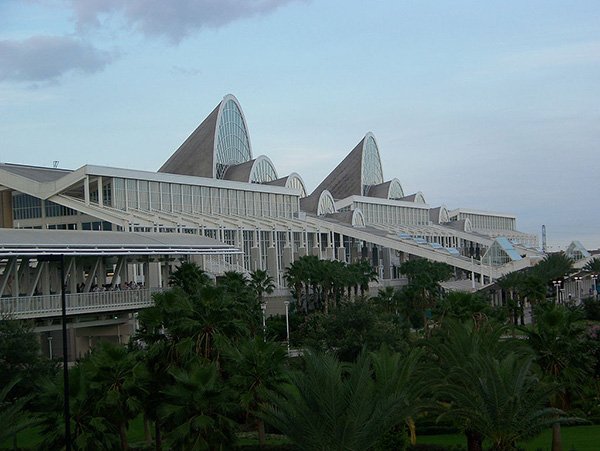 Orange County Convention Center in Orlando, Florida, is the second largest in the country, behind Chicago’s McCormick Place.

Actually, discounts are so deep they are dragging the convention centers underwater. Los Angeles convention officials made an offer to the American College of Chest Physicians for its 2016 session. The rate would be $269,918. But Los Angeles would give an incentive of $268,918. So, the cost would be $1000. But, wait. Los Angeles would offer a $25,000 marketing incentive. So, then the city would be $24,000 in the hole. But, hold on. If it got commitments, the city would give further incentives for the next couple of years, including worldwide marketing help, going deeper into the red.

“It is not even giving it away,” says Sanders. “It is giving it away and throwing tens of thousands of dollars in cash on top of it.” Then he named several other cases in which Los Angeles and other cities are “giving two or three or four hundred thousand dollars in incentives.”

In the teeth of this kind of arithmetic, Los Angeles plans to expand its convention center. “Seattle, San Francisco, Los Angeles, Anaheim, and San Diego are planning expansions. They will eat each other up,” says Sanders.

Why do the centers tolerate such nonsense — and then worsen it by expanding? The whole process is basically maneuvered by the business community — banks, hotels, retailers, construction industries, others who will profit while the city loses

Cities’ corporate movers and shakers long ago figured out how to get their new centers or expansions without the voters having a say. (San Diego is just one city with a kinky plan to evade going to the ballot. Two lawsuits maintaining that there should be a vote are now on appeal. If the appeals are lost, the expansion, along with a hotel, would seem in the clear, since the California Coastal Commission has given the project its okay.)

Centers have multifarious ways to cover up their failures. One method is double-counting attendees; San Francisco pulls that stunt. Another is counting nonconvention events as convention attendance. San Diego has the habit of tossing in dancers at the Rock ’n’ Roll Marathon with convention attendees — a gross statistical distortion.

More hocus-pocus: counting everybody attending an event as someone from out of town who spends money at local hotels and restaurants. When it made its 2013 forecast, San Diego’s center claimed that each Comic-Con attendee would spend $613.20. That’s absurd, says Sanders, noting that locals make up much of the audience. 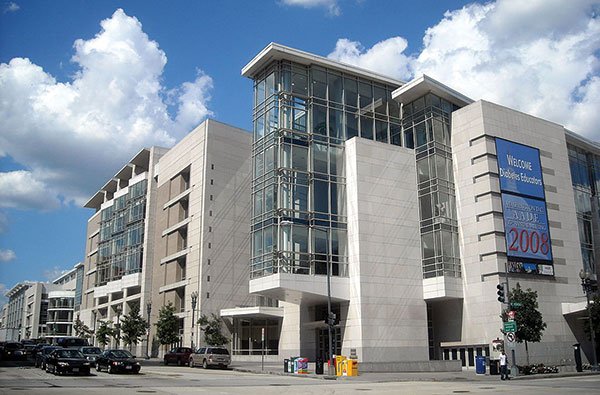 Throughout the industry, statisticians assume that every convention attendee spends three and a half nights at local hotels. This inflates the figure for hotel nights and, of course, the total economic impact that the event is touted to provide. Actually, the average length of stay is around one night, taking all figures into account, says Sanders.

How can convention centers get away with such ledger-demain? Those in the know shut up, and the press, politicians, and public have neither the time nor the expertise to follow the prestidigitation.

The worst news: “These expansions will keep happening,” as long as “you have a mayor who says it is free,” says Sanders.

Isn't this situation with convention centers similar to what you (perhaps others too) have been saying about stadiums?

Cities are lobbied to build them. City government promises the public a windfall "land of milk and honey" that will enrich everyone. The public believes. The stadium gets built (often with public money), and often (as in the case of Petco Park) the fiscal results are dismal to the small fish (the general public and small-time investors), while the schemers and their clients profit.

Saikali: Exactly. The situations are very similar. Objective economists who study whether subsidized stadiums pay for themselves by stimulating development overwhelmingly say they do not...it's not even close. But consultant/prostitutes will trot out phony figures saying they do, a biased press repeats the consultants' reports but not the economists', and the public gets screwed again. Meanwhile, the billionaire owner of the team is chuckling all the way to the bank. Best, Don Bauder

Convention centers are people, too.

Don, have you read this?:

Reinforces a lot of what you've been saying these past few years.

Duhbya: I recommend that all read that piece. This 1% author is right: we are headed for a feudal society. Local police -- with direction from Washington DC -- brutally shut down the Occupy movement. But there will be another one.

The economy will continue to fade as the middle class fades. The pitchforks will indeed come after the 1%ers -- and one day, the pitchfork carriers will succeed. Even Alan Greenspan recognizes that violence is possible unless our society addresses wealth and income inequality. Best, Don Bauder

Overbuilding in a saturated market might not be so egregious if the market were growing. But overbuilding in a declining market is really dumb. Conventions are just not packing them in the way they did a generation ago, or two generations ago. The age group that still attends such gatherings is growing older, while the younger people just aren't interested in that sort of face-to-face human interaction. What will the cities do with those gigantic facilities do with them when the conventions no longer come, or if they do, the attendance is a ghost of its former glory?

Visduh: Excellent observations. I will tell you one thing cities will do as attendance shrinks even more, and convention space rises: they will cover up the red ink. The centers will do as San Diego does: cook the books, distort the statistics.

In only a few cities, such as Boston, are journalists doing what the Reader is doing in San Diego: pointing to the insanity. The Wall Street Journal has done a good job showing how goofy city leaders keep building into a massive glut. What the hell: it's not the leaders' money being flushed down the toilet. Best, Don Bauder

But Don--that can't be true. Why, if we build a convention center expansion, and combine it with a new stadium for the Chargers, everything will be perfect, right? RIGHT? (tongue planted firmly in cheek--the last time I checked, the stadium/convention center combo in Indianapolis is a money pit)

aardvarK: Yes, I knew immediately your tongue was firmly in your cheek. In fact, it is Heywood Sanders, the expert on convention centers, who says that combined football stadiums and convention centers don't work well. Indianapolis is just one example.

But civic leaders don't care if the concept doesn't work. They know that the statistics on a failing center can be falsified and the public will never be the wiser, thanks in part to mainstream media which keeps the failure secret. Failure coverups are common in a grossly overbuilt industry. Best, Don Bauder

Murphyjunk: Yes, it's the public that is dumb. Most decision makers know they are foisting a fraudulent deal on the public. They don't care. It's taxpayers' money -- not theirs. Best, Don Bauder

SAN DIEGO CONVENTION CENTER CONTINUES SLASHING PRICES. Because of the huge national glut in convention center space, San Diego's center continues to cut prices, even as it wants to expand. The national expert in centers, Prof. Heywood Sanders, points out that in its budget for 2015, the center intends to offer rent credits of $5.1 million "that are offered to attract certain convention or trade show events," according to the report of the Independent Budget Analyst.

Raymond Schaff: According to Heywood Sanders, San Diego comes to that $613.20 per attendee by ignoring the locals who attend. Sanders says that in its 2013 forecast, the San Diego convention center estimated direct Comic-Con spending at $77 million. That comes to $613.20 per attendee. "Everybody is assumed to come from out of town," he says. And I agree with him that that is absurd. Best, Don Bauder

Raymond Schaff II: Trouble is, the forecasts would come from consultants, who are paid to give answers that the people paying the bills want to hear. Trouble is, while the so-called civic leaders pay the consultants' bill, the taxpayers ultimately pick up the tab -- and get screwed when the facility does not pay off.

This happens all around the U.S. -- not just San Diego. Best, Don Bauder

Charles Ray Batchelor: I have been writing on convention centers' -- especially San Diego's -- phony figures for years. Yes, to me, it is fraud. If somebody in the private sector were cooking the books this jail, he or she would go to prison. Best, Don Bauder

Xavier Rivas: For years, San Diego touted the Mexican propinquity. The tourism tub-thumpers plugged numbers on people who stayed one night in San Diego and then went to Mexico. The drug-related murders in Tijuana effectively ended or at least slashed that. Tijuana tourism plunged, and so did those one-night stopovers in San Diego.

Ensenada and Tecate are different stories, though, but didn't attract that many tourists. Gambling ships to Mexico ports were fairly big business at one time. Now there is too much competition. Best, Don Bauder

MSNBC's Lawrence O Donnell had a nice segment on corporate welfare in Kentucky where the state is financing a Noah's Ark replica for a religious group, he also mentions public financing of sports stadiums.