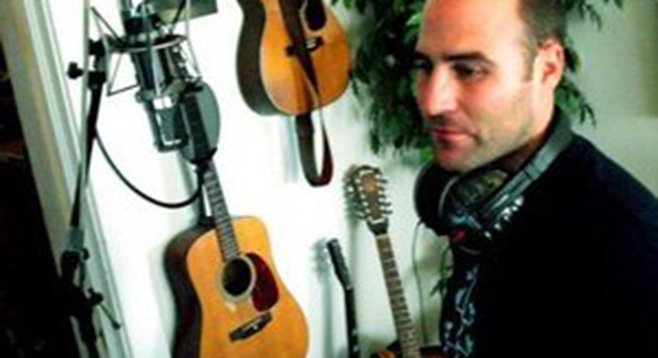 “Our drummer, Shae Moseley, came up with the band name after watching a documentary about how microphones are made,” says former Mashtis mainman Itai Faierman of his new ensemble. “A Speaker in Reverse is essentially a microphone, or a speaker inverted, turned inside-out. In the same way, our music is the expression of our internal thoughts and feelings, inverted and manifested in the external world.” The group also includes keyboardist Jeff Grasmick (Manuok), guitarist Rick Newton, and bassist Mason Mcfarnsworth.

Faierman grew up in New York City, studying piano, violin, and guitar before playing with a series of hardcore bands. After moving to San Diego in 2000, he initially stayed at a Zen monastery, where he was already writing music that would eventually find a voice with Mashtis and the Bulletins.

“After my last band ended, I took a few months to reevaluate how to approach playing the guitar in new and exciting ways. I listened to a lot of music from the 2000s to the present, deconstructing the choices musicians make tonally, lyrically, and — most importantly — how they integrate space and silence in their songs. Finally, I told the band that anything we write can and should be thrown away at any time, to allow the pure act of spontaneous creation to evolve. Perhaps like what Nietzsche meant when he said, ‘In order for a temple to be built, one must be destroyed.’ You can say that’s our motto for the new project.”

Asked to describe the new sound, Faierman says, “Speaker in Reverse combines my favorite elements of classic hard rock: that driving sense of power, inspiration, and freedom that I felt listening to records as a child, the subtleties of electronic beats and sounds that have always mesmerized me, and lots of floating harmonies. Add in a bit of tonal manipulation, lyrical intention, and sampling.”

Speaker in Reverse will play its first show August 7 at the Tin Can, where a limited-edition cassette (100 copies) will be available. The group’s first single, “Holy Girl,” recorded at local Chaos Recorders, is streaming on their Reader band page. “I had been thinking about a past relationship I was in with a woman who wanted so badly to live a holy life...the song evolved, as all my songs do, through the natural process of working, reworking, sleeping on it, working, reworking, [and] more sleeping.

“In fact, I do my best songwriting while I’m asleep.”