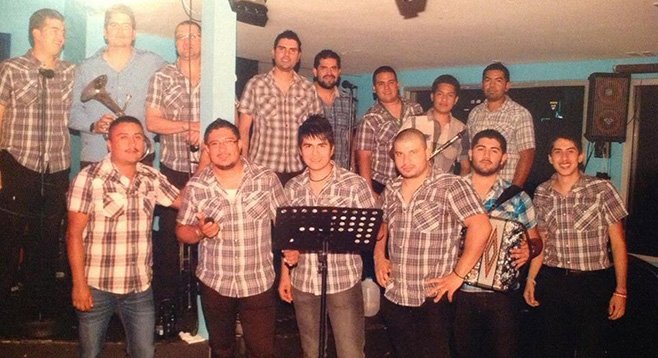 American kids don’t just pick up the clarinet or tuba like Mexican youth do.

Dario Velasco, 20, is a student at Southwestern College who plays in Estrella de Pacifico, one of a handful of local bands who play banda, a style of horn-driven Mexican polka music that originated in the late 1800s in Sinaloa. There’s a 24-hour TV channel that features banda music videos called Bandamax.

Velasco learned the tuba to earn a slot in a local banda, even though there aren’t many tuba instructors.

“I had to teach myself how to play. Because of the internet, it’s a lot easier to learn.”

Bandas traditionally have from 12 to 18 members who all dress the same. Velasco says his banda has three different polyester suits — black, white, and orange. Everyone has to color-coordinate. “If you wear the wrong color, you get fined.”

American bandas are structured the same as Mexican. One person owns the band and it is up to him who is in the band and where the group gets booked. “The band pays for the suits,” says Velasco. He says his owner has over $6000 invested in suits and band equipment.

While the polyester look and traditional instruments do not appear threatening, Velasco says many of his band’s songs are about the dangerous lifestyle of the drug cartel.

“‘Sanguinarios del M1’ is about an assassin hired by a drug dealer.”

He says that San Diego bandas have not caught up with a trend in banda music that started to take off last year: mixing hip-hop and banda.

“It’s called ‘tribal.’ You see it in Texas or in Mexico, but people up here aren’t into it yet.”

He says Estrella de Pacifico has played in Tijuana before. “But the pay down there isn’t as good as it is up here. Besides, there’s all the crime down there...”