With SDPD chief Lansdowne's help, she killed search warrant of his company 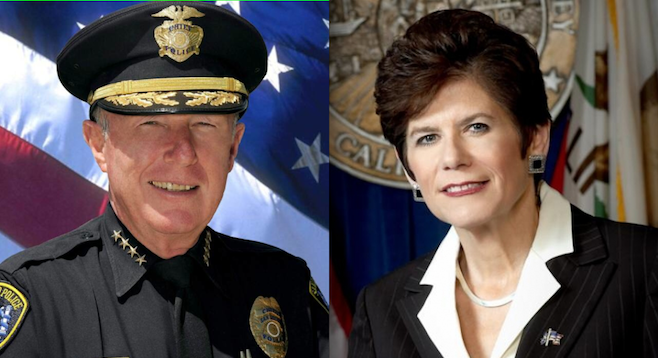 Guess who is on district attorney Bonnie Dumanis's endorsement list for her current election campaign? Aaron Feldman, head of Sunroad Enterprises, which seemingly can't stay out of trouble. There is now an investigation of Sunroad's $100,000 payment when it was seeking an easement. Former mayor Bob Filner is on the hot seat on that one. Sunroad's Tom Story, a former top city official, was involved in the passing of the money on behalf of Sunroad.

Both Filner and Dumanis reportedly received laundered money from Mexico in the 2012 election. Dumanis has admitted meeting the alleged donor, Azano Matsura, in his Coronado home. Donations from foreigners are not permitted in U.S. elections.

The controversy brings to mind Dumanis's relationship with Feldman in 2007 during the term of former city attorney Mike Aguirre. Sunroad had constructed a building that both the state and Federal Aviation Administration said was too high for safety, since it was near Montgomery Field. Feldman had put on fundraisers and raised a bundle for former mayor Jerry Sanders, who, of course, was fighting to help his donor.

Aguirre, agreeing with the state and the U.S. government, wanted something done about the building. The Union-Tribune's editorial page — along with one reporter — were trying to make heroes of Sanders, Story, and Feldman, and a devil of Aguirre for wanting to enforce the law.

Believing that Story had contacted his former employees at the city illegally, Aguirre got San Diego superior court judge George "Woody" Clarke to approve a search warrant of Sunroad. But police chief William Lansdowne refused to let his officers do the search.

"Lansdowne leaked the search warrant to Sanders, who got Bonnie [Dumanis] to kill it," recalls Aguirre. "The Sunroad case at Montgomery Field provides a prototype case explaining why businesses from Mexico might want pull with the San Diego [district attorney]."

As I have said previously, this money-laundering case is in its inchoate stages, and Dumanis deserves the right to defend herself.

There is a reason our current District Attorney is nicknamed by many in the community as "DIRTY DUMANIS." She has never meant a campaign donation she didn't like or think twice about doing a "favor" for a well-heeled "contributor." Shameful & time for a long overdue change on the 13th floor of the "Hell of Justice."

gailpow: Agreed. She has politicized the office more than her predecessors...by far. In her mind, the downtown corporate welfare crowd and the Lincoln Club can do no wrong. Best, Don Bauder

Don - explains a lot, like why she talks the talk but doesn't walk, thanks.

shirleyberan: Why she keeps getting elected is a mystery. Enough people realize she is just a lackey for the downtown interests. Best, Don Bauder

Perhaps now, with real competition on the next ballot, Bonnie will go down to a well-earned defeat.

aardvark: That would be good for San Diego. But the the corporate welfare crowd would go about smearing the winner. Best, Don Bauder

only thing that comes to mind is the old saying birds of a feather flock together.

It is really time for the citizens and voters of SD to wake up & realize that there is an excellent alternative to vote for in 2014 for the DA's race. It should not just be that clueless San Diegans throw up their hands & thoughtlessly vote for the usual suspects. Please do not think I am pimping or soliciting for any particular competing candidate, as I am just grateful that there is actually a choice for voters to consider this time. I am ashamed to say that once, I too, was a neophyte who supported Bonnie Dumanis for office--mainly because she was a woman. But now that I have been enlightened and suffered from her vile and corrupt machinations, it is personally important for me to help the citizenry understand. Thanks to wonderful Don Bauder for his always excellent stories and articles.

gailpow: Brewer, her opponent, is a good lawyer, and could restore some civic pride in that office. Best, Don Bauder

"Irene McCormack, classification “Port District,” introduced herself to Club 33 today. Irene is Assistant Vice-president, Government Affairs & Communications for the San Diego Unified Port District. She has been with the Port for 5 years and before that she was a journalist for 25 years at the SD Union-Tribune. Her husband’s name is Gordon Davis and Irene enjoys working with glass beads and photography. Ben Clay, Steve Cushman and Nikki Clay are her sponsors."

Having a lawyer in the family was probably the reason McCormack Jackson waiting 6 months and 18 days from the inauguration on December 2, 2012 to June 20, 2013 before claiming sexual harassment in order to go after the deep pockets of the City of San Diego. If her claims were made before 6 months deadline, the City could have a potential out and less culpability because sexual harassment training is a requirement within the first 6 months, and did not happen. It would be interesting to find out who exactly cancelled the City's sexual harassment training for the Office of the Mayor which was scheduled, then changed.

laplayaheritage; That is certainly something to ponder. You always come up with sharp observations and pose important questions. Best, Don Bauder

start digging from the bottom of the hole up and see who is at the top.

Murphyjunk: And hope that it doesn't get covered up before the news breaks. Best, Don Bauder

thats seems to be the way it works, caves in before getting to the top.

( someone hides all the supporting material)

Am I missing something here? Feldman isn't a US citizen, or wasn't last I heard. He is/was an Israeli, meaning he's a foreigner, and foreigners should stay out of US elections. Their money is illegal in political campaigns, and even if he can speak out, the voters should also be told that he's not a citizen and cannot himself vote.

Visduh: I have not heard that Feldman isn't a U.S. citizen or at least doesn't have a green card. If he lacks citizenry or the card, the point should have been stressed when he was doing fundraisers for Sanders. Best, Don Bauder

Dumanis used nearly $200,000 of illegal campaign funds funneled through a Mexican National, Jose Asumo Azano. Obviously, since our country doesn’t want other countries -- or their citizens – to influence our elections, we have outlawed foreign campaign contributions.

Dumanis – a former judge no less – apparently has only recently become aware of these campaign laws. Dumanis’s liason – retired SDPD Det. Ernie Encinas – is a very colorful character in this scheme. He worked as security consultant at a strip club and earned $10,000 cash per month (and ultimately received about $220,000 in the 18 months or so he worked as the security consultant). Last week he pled guilty to a series of felonies in federal court. And, Encinas was the go-between, and set up the meeting with Dumanis and Azano. (See Jennifer Jensen’s story on Channel 10: http://www.10news.com/web/kgtv/news/ex-san-diego-police-detective-ernesto-encinas-to-change-plea-in-campaign-contributions-scandal.)

After that meeting, Azano – via Encinas -- infused $100,000 into a political campaign committee, and paid the bills for the social media aspect of DA Dumanis’s campaign (another $100,000 or so). DA Dumanis never even bothered to report the donation of services for the online media campaign; and, even more appalling, DA Dumanis maintains that she neither knew about Azano’s independent committee nor the funding source for the $200,000, despite a news article in CityBeat that described the illegal campaign finance scheme. (See: http://www.sdcitybeat.com/sandiego/blog-914-new-dumanis-super-pac-backed-by-mexican-businessman.html and http://istandwithbobbrewer.blogspot.com/2014/03/dumanis-must-have-known-about-illegal.html).

Several TV Stations have begun to explore the depths of this illegal and unethical conduct. For instance, Amita Sharma on KPBS held a panel and explained not only must Dumanis have known about the source of the funds, but also it is apparent the federal investigation has only begun and Dumanis is the likely target (see: http://www.kpbs.org/news/2014/mar/18/ex-cop-san-diego-foreign-campaign-fund-scandal-cha/).

Dumanis fails the leadership test here. She has: a) cavorted with a “security officer” who hangs around at strip clubs; b) used this security officer to have a meeting with a Mexican national tycoon in the midst of a heated campaign (wouldn’t she have more high priority items than looking at “fancy cars”); c) made incredible claims the she lacked knowledge about the funds and their source. This all demonstrates her inability to lead and her wholesale lack of judgment by using Encinas within her own campaign.