Warning: Do not take weed into Mexico

A survey of who does and what happens if you do 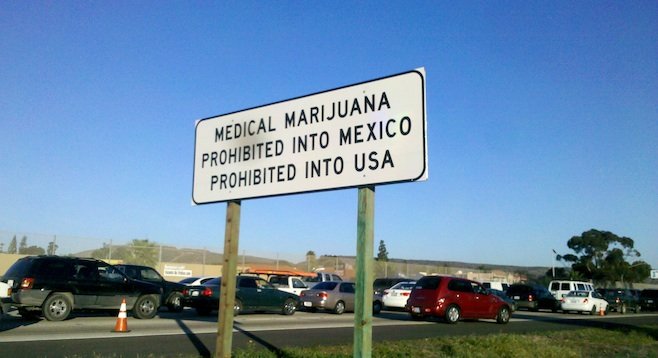 “It seems like Border Patrol read your Tijuana junkie and dealer article,” my brother jokingly told me on Facebook. He had recently noticed a new sign posted near the border that reads “Medical marijuana prohibited into Mexico/ Prohibited into USA.”

I also noticed a different dynamic when crossing into Mexico since my article was published in late December, though I doubt a correlation exists. A couple of agents usually stand by the entrance to Mexico but they pay little to no attention to the masses crossing into Tijuana. But the couple of times I’ve crossed back and forth in 2014, it has been different: a Border Patrol tent has been set up by the entrance and there’re more agents, sometimes with drug-detecting dogs.

I crossed by foot from Tijuana to San Ysidro to get pictures of the warning sign and to investigate how common it is for people to get arrested for bringing their medical mota to Mexico.

After getting to the front of the long line to cross, I approached the Border Patrol booth. “Do you have anything to declare?” the agent asked me, as usual. “I have nothing, sir, but I have a couple of questions, if you don't mind.”

Nervously, I asked about medical marijuana crossing and the new sign. He started doing something with his computer but I interrupted, “You see, I'm a writer for the San Diego Reader; I just have a couple questions.”

“Oh, you have to speak to public relations. Here, come with me.”

He directed me to another agent not attending to the lines and explained to him the situation. The other agent would not look me in the eye; he told me to look for information online and to get ahold of public relations if I had any questions. I insisted and asked him about the new sign.

“I have no idea what you are talking about,” the agent said. I tried again and asked him how often they arrest people for possession of small amounts. He refused to comment.

Unsure of where the sign was or if I could walk there to take pictures, I approached the pedicab drivers who hang out by the trolley. The manager of the pedicabs had no idea about the sign, but another driver named Shaun Mayes overheard me.

“Yeah, I have seen that sign. They put it up, like, two or three weeks ago. It's over by Tepito [a furniture store next to a frontage road adjacent to I-5 south], I'll take you there for $20.” With no cash on me, I refused and asked if it was a walkable distance. “It will take you a long time and it's far, but you can make it.”

On my way to the sign, I approached several agents on their way to work without telling them I was writing for the Reader. Their reply was short and they would deny to answer more than one question as they walked away.

How often do you guys arrest people for possession of pot who are crossing from the U.S. to Mexico?

What happens when someone gets caught with small amounts?

The sign is located around 1.5 miles from the border. Before the Via de San Ysidro exit (exit 1B). I got there at 4:20 p.m. to take the picture. On my way back to Tijuana, there were no sniffing dogs by the entrance, just two agents and the tent was gone. I tried my luck one more time before crossing and asked again.

“Smoke it here or smoke it over there, simply don't cross with it.”

As to who is smoking it “over there,” I interviewed a couple bouncers to find out if there has been a surge in medical marijuana-related incidents.

No se si es del gringo, pero hay unas mas apestosas que otras," the bouncer of a bar commented on the smell that comes from the parking lot of Plaza Fiesta, where the bar is situated. Translated, he said, "I don't know if it's from the gringo, but there's some that stink way more than others.”

Several Tijuana bars allow cigarettes inside and patrons take advantage of the clouds of tobacco smoke to sneak a toke.

“I used to cross [the border] often and many friends from Tijuana bought from me for their personal use," comments a medical marijuana card-holder from San Ysidro. "I had my card since 2008, but I don't dare cross it anymore. One time I had a couple grams in my pocket but I spotted the Border Patrol dogs by the border, so I turned around and tossed it to the empty lot. They told me that they saw me turn around and what I did was suspicious, but nothing happened to me."

Since then, he does not dare come near the border with pot.

"I cross on a motorcycle, so there's no concern for me," comments a different card-holder. "They never check us and I never have more than just for my own consumption. Friends want to buy it from me, but I'm not a dealer."

Somehow I missed this earlier. I can offer this advice: