Distruzione Totale by Anti You 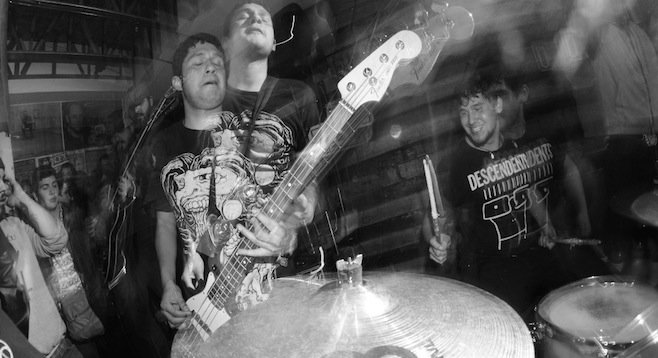 Hundreds of crust-punk enthusiasts showed up to Tijuana’s El Tigre bar for a night of total destruction. The bands DLT, New Breed, and Pornoestereos, from Tijuana and Mexicali, started the show before punk quartet Anti You from Italy took the stage. What was already a chaotic mosh pit got more people and energy as the Italians delivered fast-paced hardcore punk. The show was closed by one of Tijuana's most popular punk bands, DFMK.

The show was free of charge, though donations were encouraged. Despite the high attendance, the touring band only managed to collect $70 U.S. total. But it mattered not to the Italians who left Tijuana happy and thankful for all the people who showed up. Anti You played in San Diego at the Bancroft before coming to Tijuana. They are headed north on a two-week-long U.S. tour.

“We didn't expect this many people,” commented Chuy, the bartender of El Tigre Bar. “We had a band from New Zealand and one from Germany this year already, but almost no one showed up those nights. This was definitely the best show we had in this beginning of the year.”