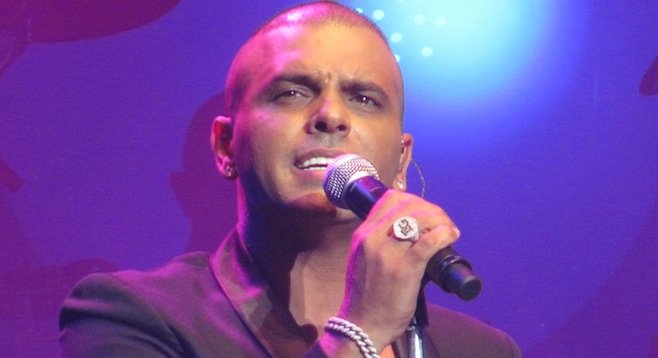 Jewish media such as the Jerusalem Post and Jewish Telegraphic Agency are reporting that San Diego's Lawrence Family Jewish Community Center canceled a performance by singer Eyal Golan because of member protests about Golan's alleged sexual involvement with underage girls. The show was to have been yesterday (January 19).

The Times of Israel reported in November that Golan, also a reality-TV judge, was interrogated by police. Golan and another singer were accused of sex with minors. Investigators searched the home of the father of one of the singers.

The Jerusalem Post said that one of the organizers of the concert is threatening to sue the Lawrence center.

"Bringing Eyal Golan over to San Diego is no small matter," Yigal Amsalem told the Post. "How could they have cancelled a concert one week in advance and for no good reason? They will pay for this in legal costs in a lawsuit by Eyal Golan and by us."

A real shame. I am told that Eyal's grandfather served in the Merchant Marine during WWII with the center's donor, M. Larry Lawrence.

Burwell: The late M. Larry Lawrence's claim that he had been injured in the Merchant Marine in World War II was proven false -- but AFTER he had been buried in Arlington National Cemetery. Alas, the body had to be disinterred when Lawrence's bio was shown to be false.

During the time he claimed to be in the Merchant Marine, he was actually at Wilbur Wright College in Chicago. But he falsified that, too, claiming that he had been at the University of Arizona.

Lawrence and his father bought the hotel Del from John Alessio. I have heard some interesting stories about that, but I can't remember all the details and my sources are now deceased.

All that said, the Lawrence Family Jewish Community Center is an outstanding organization, and an institution San Diego can be proud of.

Burwell, I think I got part of your joke. But only part of it. And I think I missed an even bigger laugh.

Visduh: My response to Burwell explains Burwell's joke. He was poking fun at the story about M. Larry Lawrence: he claimed he had been injured in WWII as a Merchant Marine, but after he was buried at Arlington, it was discovered he had never been in the Merchant Marine -- in fact, never was in the war. So the body had to be disinterred. There were other falsehoods in Lawrence's bio.

Burwell is just kidding that Eyal's grandfather served with Lawrence in the war....unless there is something that I missed, too. Best, Don Bauder

That's the part I got. But I have a hunch there's some other connection between Eyal and some claims that are phony.

Visduh: I wouldn't be surprised. The home of the father of one of the singers was searched for evidence. However, in the clips that I saw, there was no mention of any grandfather. People who fought in WWII are rare these days. Best, Don Bauder