Anything Goes at Welk Resort Theater 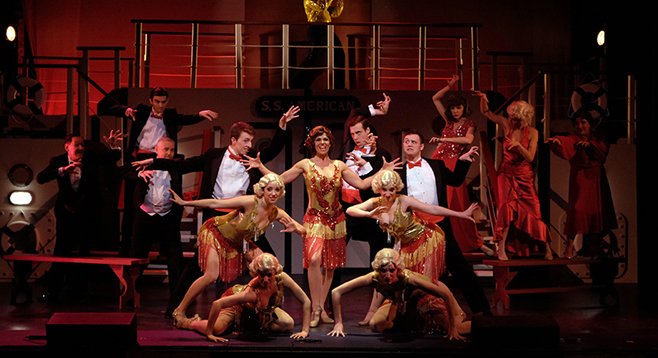 Somebody should write a musical: The Last of the Tap Dancers. There’s only one left and the uniquely American art may vanish. When the Tap Dancer learns he/she’s the end of the line, he/she goes on a “Hoofer’s Crusade,” teaches tap near and far, and saves the world from Global Mundanity.

The last number would be a Busby Berkeley spangled dazzler with as many heels and toes stomping the floor in sync as the budget can afford.

This thought hit me as I watched the Welk’s rousing production number, “Anything Goes.” Choreographer Ray Limon had 13 performers clacking with precise syncopation and verve. And it dawned on me: musicals don’t have tap numbers any more. Ergo the musical.

But, in the mean time, Hit It!

(and while we’re on the subject, check out the syncopation in that lyric!).

The musical’s been called fluff and silly, but it’s about escape: from restrictions and the manic woes of the Depression. A lyric invites you in: “When the poor brain is cracking/There’s nothing like packing/A suitcase and sailing away.” And for those who couldn’t, in 1934 when it opened, they could sail on the S.S. American and follow the antics of Reno Sweeney (“New York’s most notorious Evangelist”), Moonface Martin (Public Enemy #2 and sinking down the list), and Billy Crocker (broken-down stock broker).

I caught a matinee at the Welk. The show took a good while to warm up (and one of the follow-spots was using the wrong lighting plot). The singers and Justin Gray’s five piece band were solid throughout. But few could speak the dialogue’s machine-gun patter with requisite speed and clarity (another dying art?). And they slowly grew comfortable with Limon’s vaudeville-like take on the show: one-liner, drumbeat (pa-doop-oop), and face-front take for the laugh.

When Reno, Moonface, and Billy come together and sing “Friendship,” the show settled in and sailed smoothly from then on.

Some jokes are the top, so to speak (as in “liquor has never touched my lips”; “you know a short cut?”). Others groan. They’re impossible to attribute since two separate writing teams worked on the book, and it’s been tinkered and updated ever since.

But it isn’t the book, or the episodic plot that often meanders, for that matter. It’s that Cole Porter score which, song after song sneaks up on you with long lead-ins and then suddenly stratospheres the house with “You’re the Top,” or “I…get no kick…from champagne.”

Natalie Lucci must feel like she’s floated off to Cole Porter Heaven. She gets to sing “I Get a Kick Out of You,” in a torchy smolder, and blare “Blow, Gabriel, Blow” like a trumpet, and dances up a storm while singing the title song. She scores with each, and each in a different vocal style.

And where has Josuha Carr been? Well, he’s producer/manager of the Welk theater, but still. His bio says he hasn’t been on a stage since 1997, but his Billy Crocker shows polish and skill, and nary an ounce of rust.