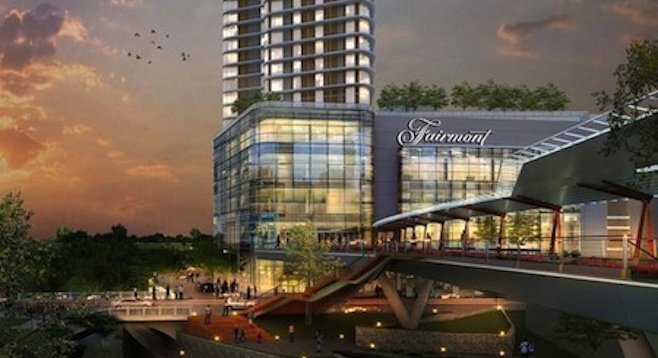 This was supposed to be the month that Douglas Manchester finally broke ground on his latest mega-money development, the $350 million Fairmont in Austin, Texas, according to an announcement back in October of last year by Manchester's son Doug, who is overseeing the project for Manchester Texas Financial Group.

The lavish project has been on Manchester's chronic to-do list since it was announced in June 2011. In June of last year, the younger Manchester told the Austin American-Statesman that the hotel project would break ground in November 2013.

He also released a new market study highlighting how much convention business Austin is losing annually because it doesn’t have enough hotel rooms downtown, an issue local convention officials and other experts have talked about for years.

When November came and went, the target date shifted to January 2014. But, based on the latest observations of the project site related on Skyscraper.com’s Austin forum, prospects for a start this month are rapidly dimming. 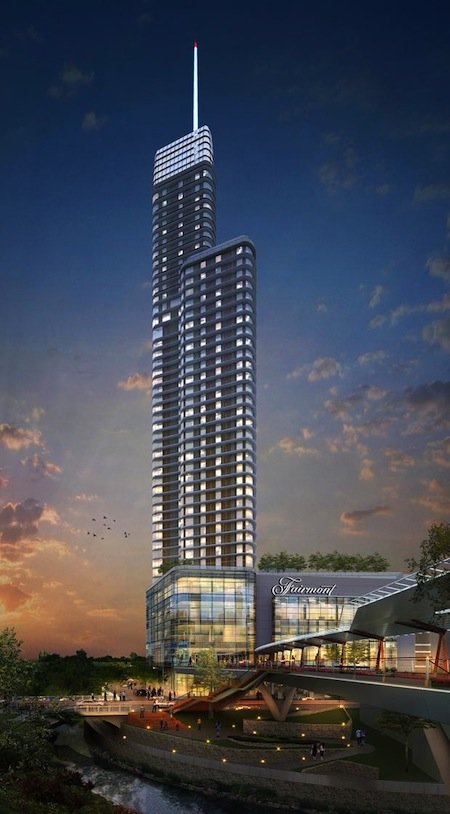 "I drove by the site today. It looks like they are having some sort of RV event," a January 9 post reads. "Not sure if that big RV out there is the mobile office for the project or not."

Answered another, "The Austin Home and Garden show is going on this weekend. All the stuff on the lot is for that. Hopefully we will see something next week."

On January 12, a poster chimed in, "Ahhhh. I was hoping site prep would be happening when I got back in from Marfa! My crystal ball is telling me this is gonna break ground very soon. Can we all agree on this?"

On Thursday, January 17, someone commented, "We should know something next week whether or not groundbreaking will happen this month..."

Then someone else offered: "huge film crew on site taking up entire block. i doubt its breaking ground this month."

And: "Probably the [Adam] Sandler movie."

Director Jason Reitman and Sandler are currently in Austin shooting Men, Women & Children, which, according to a news release, "follows the story of a group of high school teenagers and their parents as they attempt to navigate the many ways the internet has changed their relationships, their communication, their self-image, and their love lives."

The same might describe something of Manchester's recent history regarding his purchase of the former San Diego Union-Tribune and its web operation, along with his subsequent hookup with a new Russian bride, as related here by Don Bauder.

We put a call in to Dick Gibbins, Douglas F. Manchester's second-in-command, at his offices in the Manchester Grand Del Mar resort regarding the status of the newspaper magnate’s Austin deal. The desk said he was in a meeting and not immediately available for comment.

The Fairmont? Not the Manchester Fairmont?

So did Manchester ever get approval for that Grand Del Mar helipad that was not permitted?

"having some sort of RV event" - Ha Ha. Enjoyed it. Good luck, Papa and Papa, Jr.