Madrid out, Alessio in on SANDAG board

Other appointments made at La Mesa council meeting 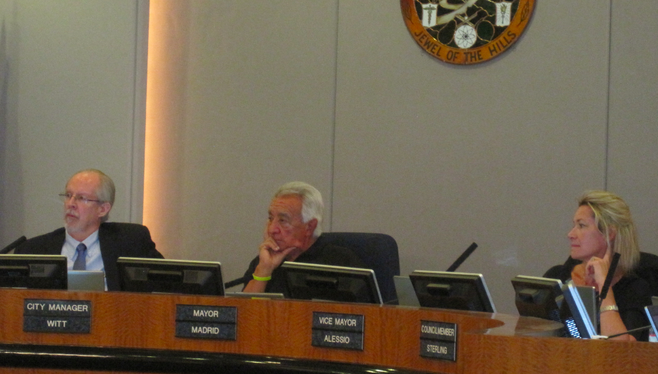 Councilwoman Ruth Sterling joined Madrid in opposing the change that the mayor said could result in the loss of "a significant voice on behalf of" the city.

Prior to the vote, Madrid said that he sits on SANDAG's executive committee, transportation committee, and policy committee. "None of those positions will go with a new appointment," he said.

The four East County mayors make committee nominations. There was no guarantee that a new representative would be nominated, especially to the "highly coveted" executive and transportation committees.

"You can sit there as an observer, but you will have no vote, no voice,” warned Madrid.

Madrid began serving on the council in 1981 and was first elected mayor in 1990. He said in a January 16 interview that he is running for mayor this year and that he has served on the SANDAG board for 26 years collectively.

Council appointments to outside boards are made at the first meeting of the year. This year, that action was preceded by councilman Ernest Ewin's agenda item: a request that city attorney Glenn Sabine explain the appointment process.

After Sabine described procedure that could include an appeal, Madrid turned to a list of boards that started with the Harry Griffen Park Joint Powers Authority.

Alessio, who was elected to her first term in 2012, said she wanted to appeal and start with boards that the council voted on. Sabine told her to ask the mayor first. Alessio did and Madrid said he had "no problem with that."

Alessio made a motion to re-appoint Ewin as primary representative to the Metropolitan Transit System (MTS) board and councilman Mark Arapostathis as the alternate.

After the council unanimously approved the appointments, Arapostathis said he "'was thinking to spread things out and give everyone a chance." He nominated Alessio as the SANDAG representative.

Alessio said she was a land-use attorney.

Sterling spoke about serving as the primary MTS representative and referred to Ewin. He served on the council from 1985–1999 and was elected again in 2010. Sterling said, "I was good at what I did" on the board. When Ewin returned to the council,  "he made it clear he wanted it [MTS appointment] back…. It's politics."

Madrid spoke about a "political coup" in Oceanside, where the council in 2013 voted to remove mayor Jim Wood from the SANDAG board.  He served on a number of key committees, "and Oceanside is not represented on any of those committees," Madrid said.

After the vote on the La Mesa SANDAG representative, the council unanimously named Sterling the first alternate and Arapostathis the second alternate to that board.

Earlier, Madrid gave his annual "audit" report to the city. Ewin requested equal time in another agenda item, asking that councilmembers have the opportunity to give state of the city addresses at the January 28 meeting.