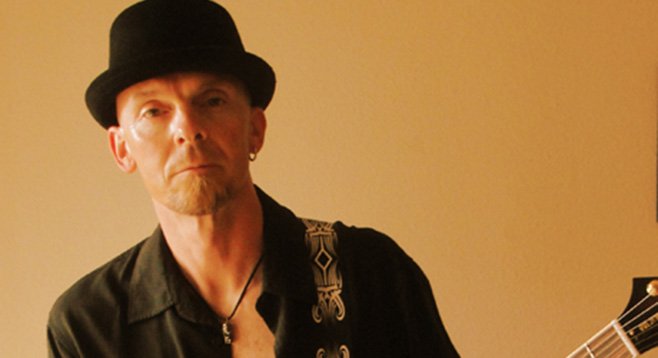 “I really didn’t get my act together until I relocated to San Diego,” says Taz Taylor, who arrived from the U.K. in 1997 and has lived in I.B. since 2000. “Though we’ve sold far more CDs in Europe and elsewhere, San Diego has always been [the Taz Taylor Band’s] home base.... There are so many great players here, and everyone takes what they do seriously and throws themselves into it with commitment. Nothing seems out of reach or unattainable.”

Taylor says his 2007/2008 U.K. and European tours were “a little surreal for me, as I never imagined that as a possibility when I actually lived there.”

“Schenker is undoubtably my guitar hero...it would be fair to say that our sound is based on that of the Michael Schenker Group. The fact that we’ve recorded and toured with two ex-MSG vocalists [Bonnet and Slack] and one ex-MSG keyboardist [Airey] is something I’m very proud of.”

Taylor notes, “It’s certainly true that we’ve had some high-caliber singers, which might make it more interesting to some now that we’re an instrumental band!” The group’s new album Deja Voodoo, dropping next month, is their first full-length minus any vocals. “We recorded at Blitz Recording Studio in Mission Hills. I’ve known Richard Blitz longer than anyone else currently in my life, excluding my wife and my mom.... Everything was tracked together in just a handful of takes, the only overdubs being the guitar solos and keyboards.”

Outtake: The Deja Voodoo release party happens February 15 at Brick by Brick in Linda Vista. “This is the very first Taz Taylor Band album that’s been recorded by a lineup that has actually existed for some time and has been playing shows prior to going into the studio. Every other album was made after the band had reached some kind of crossroads, and we regrouped with a few new guys and started over.”