New drinks for Sycamore Den, problems with cocktails as such

Winter menu has some successes, but it also illustrates the growing problem of high-minded bartenders and the bars that employ them 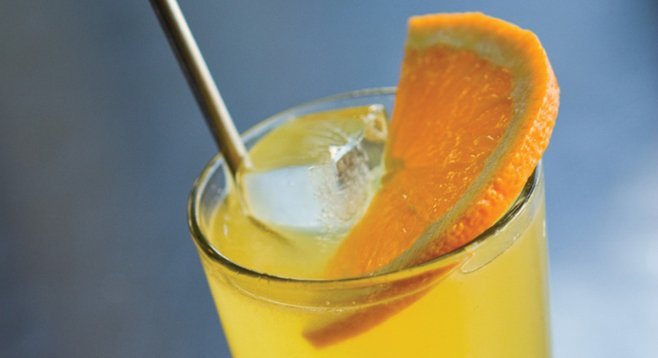 In addition to Sycamore Den’s decision to get a few bites of food on the bar menu, the Normal Heights cocktail lounge with the beards-and-shotguns flair has a new series of winter cocktails ($9) rife with Monty Python-style punny names. Some drinks remain from the old menu, but most are brand new, and all are creative. We’d expect nothing less from the mind of celebrated local barman, Eric Johnson.

Obscure and outmoded ingredients (making a comeback?) are a huge part of the nostalgic spirit of trendy cocktails. Allspice Dram shows up in the Sink or Squid, ignoring its thirty-year-old Trader Vic's heyday. Cherry Heering, in the Kentucky Commander, is also a big part of Singapore Slings and the Blood and Sand….both out of fashion before half of Sycamore Den’s staff was born. Such sentimentalities are cool, but the Commander has too much going on. There’s a flavor somewhere in that Collins glass of bourbon, Heering, lemon, orgeat, Peychaud’s, soda, and egg white (which really needs a harder shake than it’s almost always given), but it’s damn near impossible to pick out.

Ditto for The Dozens. The bar goes bonkers with orgeat, lemon, and “orchard pear” in a rocks glass, so it’s only a matter of time before the apple brandy fades straight through the background, runs out the back door, and keeps going until it finds 1932 and a Jack Rose.

Much better is The Affray, which manages to stick to its guns despite a long list of ingredients (bourbon, apple brandy, “orchard apricot,” sweet vermouth, Angostura, and Peychaud’s bitters served up). That sounds complicated, but the clean result highlights delicious bourbon.

The same goes for the Morning Toast, which has whiskey, coffee syrup (from Dark Horse Coffee), mole bitters, and orange rind on the rocks. Each flavor sneaks in around the edge of the whiskey, adding just a little to the overall. It’s good. Because subtlety.

That brings us to the greater point. Overdone bartending isn’t high-concept, it’s a self-indulgent substitute for sophistication. Since when is it cool to be cool just for the sake of being cool? Sycamore Den is far from alone in this extensible critique, but it remains subject.

The reason that Morning Toast is so good is that it’s basically an Old Fashioned, with a subdued and expressive elaboration. The Affray, despite its complications, is little more than a gussied-up Manhattan. Hardly Wallbanger — the bar’s signature cocktail that’s so successful it made the cut for the new menu — would be better called “Really Almost Entirely a Harvey Wallbanger Except It Has Galliano.”

All those drinks are good because they respect the less-is-more principle that makes Martinis, Manhattans, Daiquiris, and all the O.G. cocktails so good.

But, look at the Kentucky Commander, or any other overwrought cocktail from SD’s “craft” cocktail bars. It’s not like the drink sucks. It’s tasty-ish, but it doesn’t satisfy.

Back in the day, sailors would “proof” rum rations to see if ship captains watered down the booze. The test involved gunpowder and combustion, and left us with the word proof to indicate the strength of spirits. Cocktails need a similar test. Try ordering a snooty mixer from a posh bar, drink it, and then honestly answer the following question:

“Would I be happier if I’d just ordered one of the classics made with good liquor?”

These fancy cocktails don’t always proof, and that’s not right.