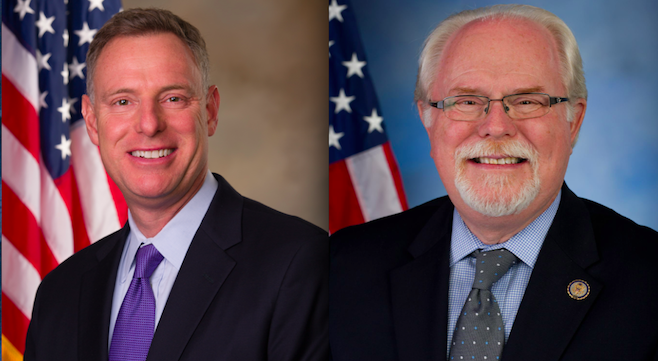 La Jolla Democratic congressman Scott Peters and fellow House Democrat Ron Barber of Arizona, under fire by ads sponsored by the billionaire GOP Koch brothers of Wichita, Kansas, have set up a joint fundraising committee, according to filings with the Federal Elections Commission.

Registered on December 4 of last year, the new committee, called the Barber-Peters Victory Fund, has already staged its first fundraiser, a December event at the La Jolla residence of David and Ginger Boss, according to an online posting by Actblue, a Democratic fundraising website.

In late October, the Koch-financed “Americans for Prosperity” launched a blitz of TV, radio, and web advertisements against Peters and Barber, targeting their support of president Barack Obama's healthcare program.

Cast as educational, the Koch effort did not back opponents of Peters or Barber, an ex-aide and successor to shooting victim Gabby Giffords, who left her seat in Congress. Former San Diego city councilman Carl DeMaio is the most prominent of Peters's current foes.

Boss, a real estate lawyer, was joined by Ernesto & Becky Grijalva and Gary & Joni Jones in sponsoring the event, the listing says.

For its part, DeMaio's committee has been picking up four-figure donations from various local Republicans, including Cindy Hedgecock, wife of U-T TV talk-show host Roger Hedgecock.

Stuart Posnock, the executive with New Jersey housing billionaire Zygi Wilf, who has given to an array of San Diego politicos, including Democratic ex-mayor Bob Filner and both current candidates for San Diego mayor, also has kicked in.

The DeMaio campaign's latest fundraiser is set to be staged in Palm Springs this coming Sunday, January 12. "Carl is running as what he describes as a 'New Generation Republican' where the Party reaches out to all communities — particularly to voting blocks where the Party has not traditionally done well in," says the invitation.

Everyone who's grateful to have Congressman Scott Peters representing them instead of Brian Bilbray, whom Scott vanquished 13 months ago, ought to recognize that contestant Carl DeMaio is a lot worse than Bilbray ever was. Peters is a pragmatic centrist for a centrist district and deserves to be re-elected to the House.

Those Hedgcocks really get around on the Right: Roger finances Faulconer for mayor and Cindy $upports DeMaio. What a pair.