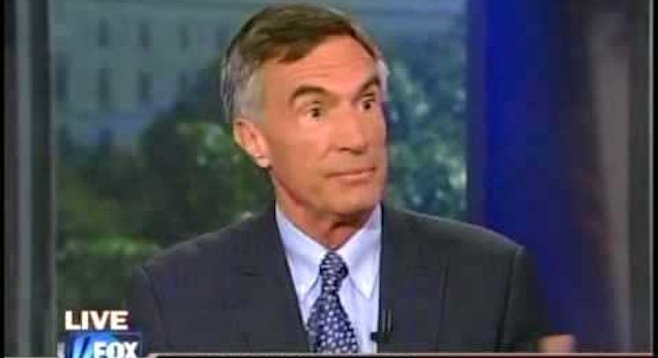 Fallen San Diego mayor Roger Hedgecock, who has long described himself as a "recovering politician," has suffered another relapse, judging by the $10,000 that his corporation — Worldwide Community Forum, Inc. — gave January 7 to the GOP Lincoln Club's committee to dash Democrat David Alvarez's hopes of becoming mayor.

Currently holding forth on U-T TV, a cable channel run by La Jolla real estate magnate Douglas Manchester (who is backing Republican champion Kevin Faulconer for mayor), Hedgecock resigned his job as mayor after being convicted in a 1985 campaign money-laundering case.

Following a second trial and lengthy appeals, Hedgecock, represented by Las Vegas lawyer to the mob Oscar Goodman, cut a deal with the district attorney, as reported here in 1998 by Bill Manson:

Rather than face a third trial, Hedgecock pled guilty to one felony conspiracy charge, agreed to pay a $5000 fine, and served three years' probation.

In January 1991, a judge, following the terms of Hedgecock's plea bargain, reduced the felony conviction to a misdemeanor and dismissed the case.

Under the deal, Hedgecock is forever required to disclose his record if he runs for office, seeks local or state licenses, or applies for a concession to sell state lottery tickets. He later paid a $30,000 civil fine to settle state corruption charges.

Hedgecock, who started political life as a liberal Republican, veered to the right during his subsequent career as a radio talk-show host. He turned up on Manchester's media shortly after the San Diego hotel mogul opened for business.

The operations of Hedgecock's Worldwide Community Forum have drawn their own share of scrutiny, as reported here in March of last year by Don Bauder.

Hedgecock makes a big slug of money from a nonprofit, tax-exempt organization in Arlington, Virginia, the American Studies Center. It calls itself a “non-partisan educational organization” but boasts of being “a voice for American conservatives” through a division, Radio America, that syndicates Hedgecock’s radio show.

As Republican Faulconer has been drawing big money from the right, his city-council colleague David Alvarez has continued to pile up cash from labor unions and state Democrats.

On January 7, according to a report posted online by the California secretary of state's office, he received $70,000 from the California Democratic Party. The next day, the Service Employees International Union Candidate PAC gave $25,000 to an independent expenditure committee backing Alvarez.

So it's OK for the special interest SEIU to give $25,000 to their candidate, but it's not OK for others to give to the candidate of their choice? Come on. This is a regurgitated hit piece on Hedgecock. Grow up.

Actually, pheller, I absolutely do not like Mr. Hedgecock's politics, particularly his almost diabolical hatred of national Democratic politics, and THAT is why I would never support a candidate he backs. Not this article. This article just simply gave me an opportunity to voice an opinion. And the next commentator said it best: "With friends like Roger Hedgecock, Kevin Faulconer won't need enemies." And I do NOT need to grow up. I'm as grown up as I'll ever be, and do not really need childish admonishments.

I didn't see any hit here, just some of the facts about Hedgecock's sketchy past and present generosity to Kevin Faulconer. No justification of Labor's contributions to David Alvarez either, though from the look of things, Alvarez is going to need every penny.

Of course this was intended to be a hit piece! 11 of the 13 paragraphs were devoted to rehashing old (more than a decade) settled news. The article only briefly mentions in the last paragraphs that the Democrats and SEIU have given far more to Alvarez. The contributions from SEIU should be more concerning to even the least inquisitive reporter since they heavily influence policy in the state from which they benefit directly. And posting anyone's personal address is highly unprofessional. Do you want your's published? If anything happens to Mr/ Hedgecock's house, you should be held responsible. With reporters like Matt Potter, who needs enemies?

Grinding an axe, Matt? I don't see stories often stating who else the subject's lawyer has worked for. You should go to work for the U-T.

Actually I've seen and read MANY news stories mentioning a lawyer, and who that lawyer has defended before. You see this constantly with celebrities in trouble. Also, the U-T is not hiring, especially reporters from the READER!

I always enjoy the history. We have to be reminded in this town, and often.

Count the convicted felons contributing to each side. It DOES matter who the hypocrites are when they try and win elections with innuendo. Unions are lobbies for working people. Why would anyone be shocked or upset by that, unless you hate America? The People are beginning to see through to the real hatred that drives the Right. If it happens one city at a time, then so be it. San Diego is a great place for such a movement to gain momentum because people will always keep coming here, the investment will never stop flowing, no matter what doom-and-gloom the developers keep spouting to try and keep from yielding a couple percentage points on their portfolios.