Ed eats another salad, this time with beef bile and fermented fish 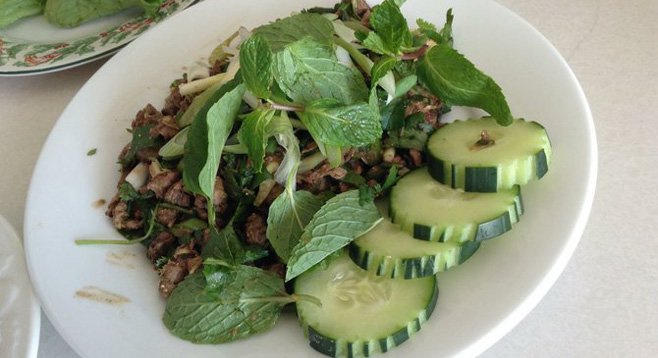 You don't think of "Asian" and "salad" in the same breath. But here I am up in the wilds of 47th street, heading behind a garage/tire shop. Looking for a low building with the sun-faded sign. 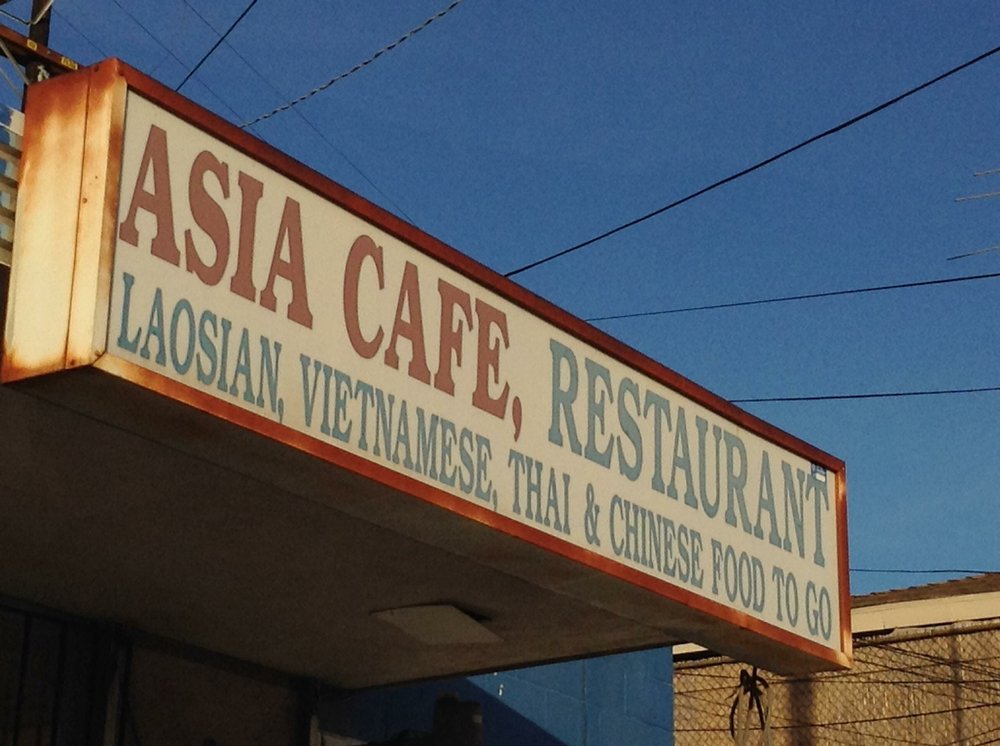 Ah. Thar she blows. "Asia Café," right next to Laostars custom teeshirt printing shop. Actually everything in this little cluster of shops is Laotian, now I look. Asia Café's windows are all barred, but it still looks pretty relaxed in there. Who knew it was home to one of the great salad dishes of the East? 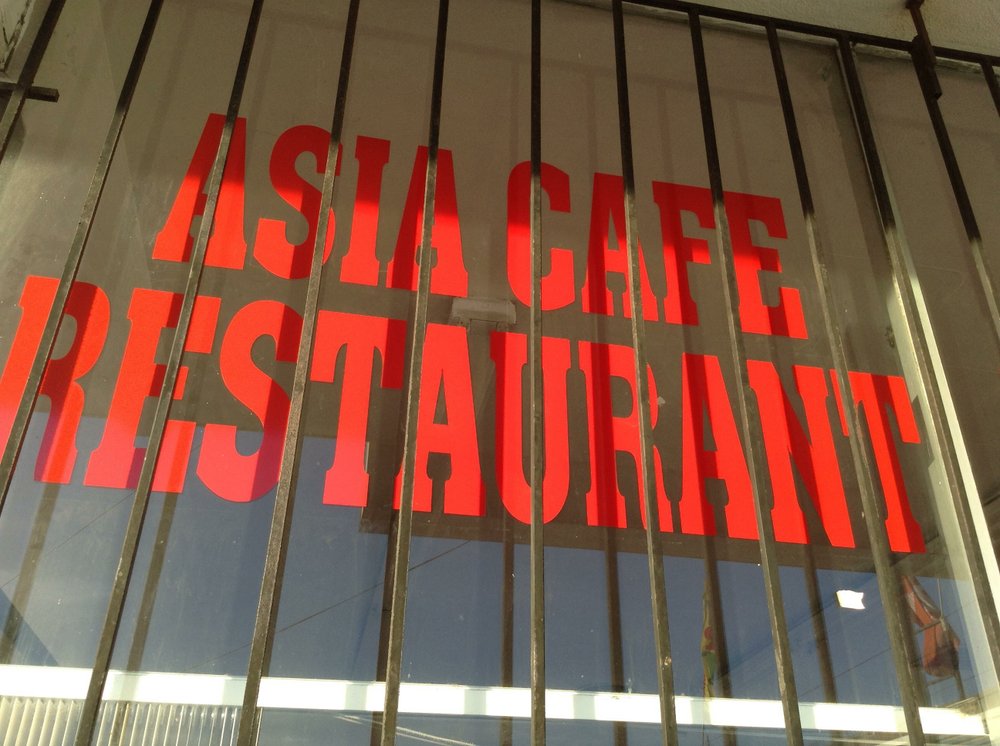 Laos is the country and larb is the salad I'm looking for. I'm determined to keep up this salad kick till I've lost ten pounds and gained pep in my step.

Asia Café has maybe six tables, maroon and white walls and a small counter in front of the kitchen. It looks like it has food from all over Asia, like Thai and Vietnamese, but you can see Lao is what it's really all about. Pictures on the wall show the last King of Laos, Lao monasteries and Lao monks. So I figure they've gotta have larb. I like the idea because it' s a salad, but with plenty of ground beef or duck or whatever to give flavor and oompf to the nuts and twigs part of the dish.

But I get a bit of confusion when I ask Johnny, the guy at the counter. "Papaya salad?" he says, like that's what most people ask for. Another name for larb? 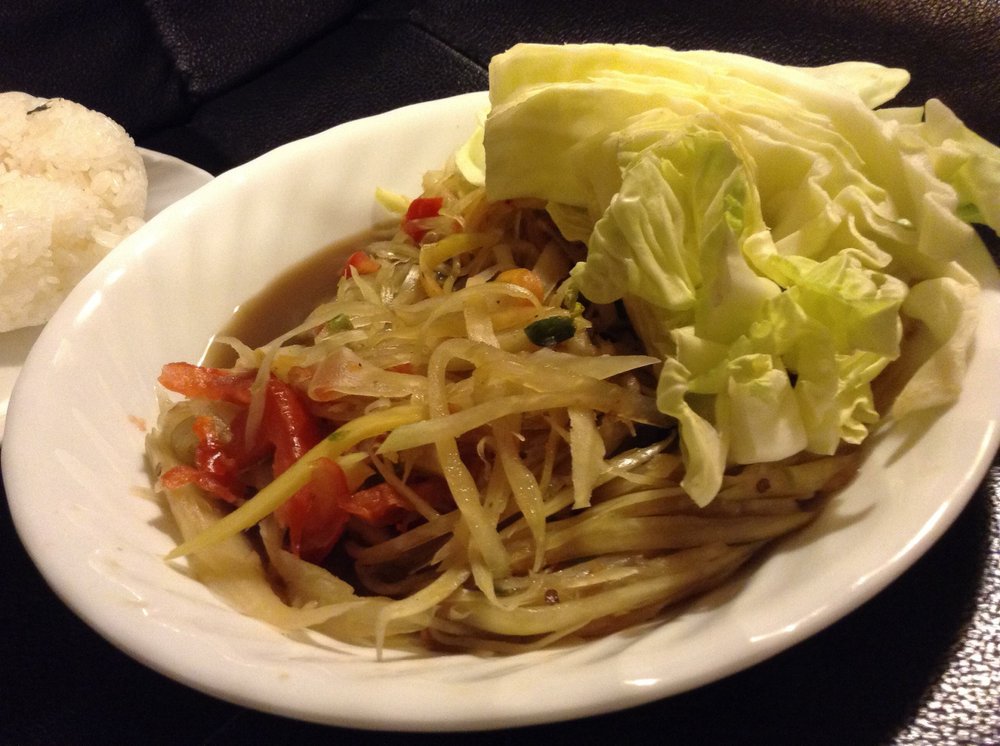 "Yes," I say, without thinking.

I hear a lot of clanging and chopping from the kitchen behind, and five minutes later Johnny's dad Robert turns up with a plate with what look like noodles, at first glance.

Turns out that's the thing. This is no way the sweet papaya you think of. It's definitely sour, like tasting of unripe fruit, which it is, plus fish sauce, I'm guessing. Oh yes. It's called tam som. Fermented crab, shrimp, fish go into the making. Johnny says it's up there with larb as Laos's most popular dish.

But hey, it's a salad. The papaya may be unripe and soaking in the juices of tamarind and lime and those fermenting shrimp and crab and fish, but it's still a fruit, and you still get big lettuce leaves, so, yes. Salad. Healthy. And has the classic four flavors Asians like to bring to the table: sour (the lime and chiles), salt, savory (the fish sauces), and sweet (there's some palm sugar in there too). 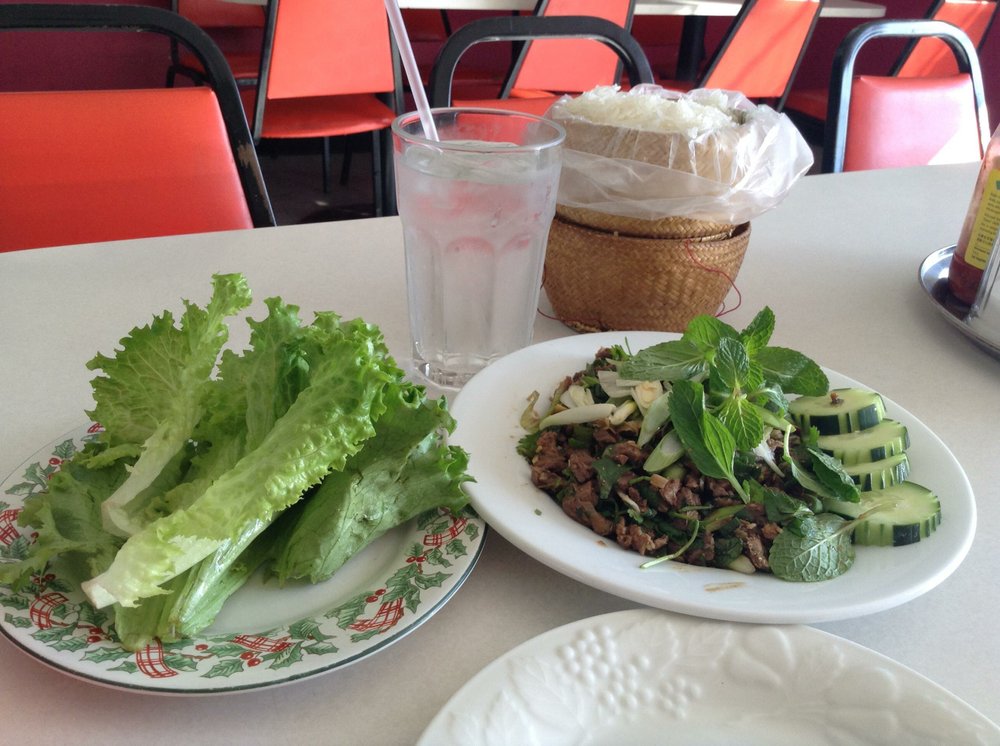 Of course carbs come in the form of sticky rice. But man, that's so great for soaking up the juices under the papaya.

So that was $7. I've left some to pack and take back to the ranch, see what the lovely Carla thinks. Question now: Should I have the larb that's really what I came for?

I order a Lao drink while I think about it. It's "soda-egg" ($2.50), and it's a mix of soda, sweetened condensed milk, plus a raw egg dropped and mixed in. And guess what? It's deliciously refreshing, specially after the sharp heat and sourness of all that marinated papaya.

What the heck. I order the larb ($7) with ground beef. (Could have had seafood.) And man, a whole new meal. The ground beef is mixed up with chopped salad, and it's covered in mint leaves.

It comes with plenty of lettuce leaves to pick up the meat with. 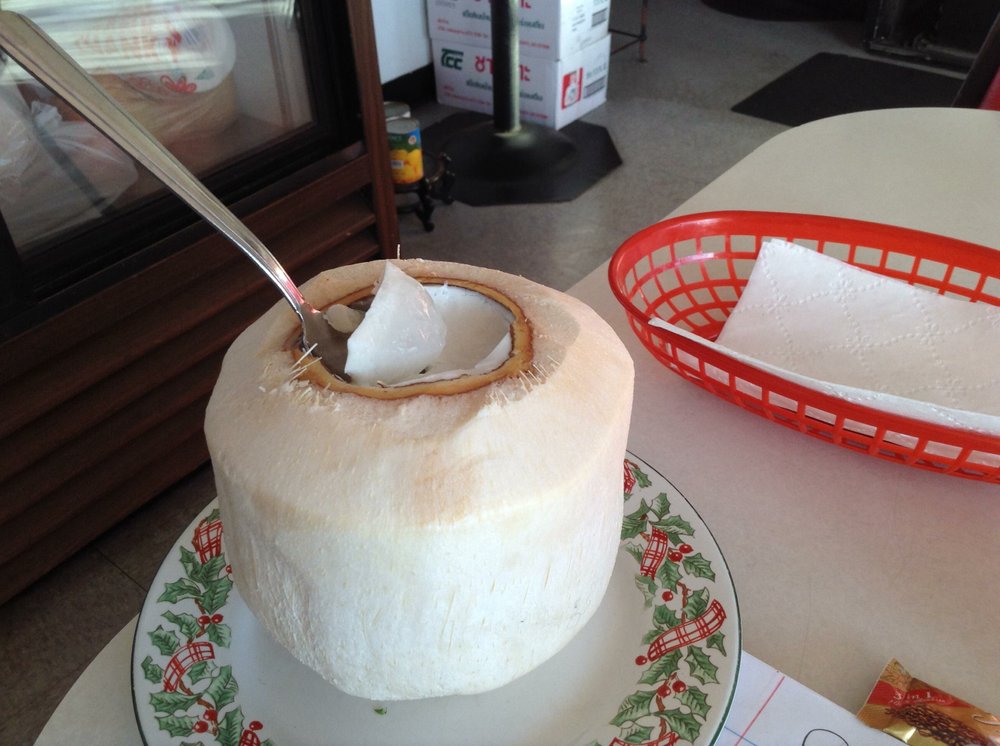 But Johnny explains there's more to it. "We have ground beef, beef tripe, and beef bile mixed in. That makes a bitter sauce to add flavor. Then we have cilantro, green onions, and padaek, the Lao fish sauce. My dad makes that here. It's different than, like, Vietnamese fish sauce."

"I add galanga, lemon grass, shrimp paste, tamarind, so the fish sauce smells better," says Robert. "And Laos is an inland country. The fish are freshwater fish. They taste different. So the sauce tastes different."

You'd think the padaek wouldn't work with beef salad, but it does. Adds a sort of sweetness, actually. 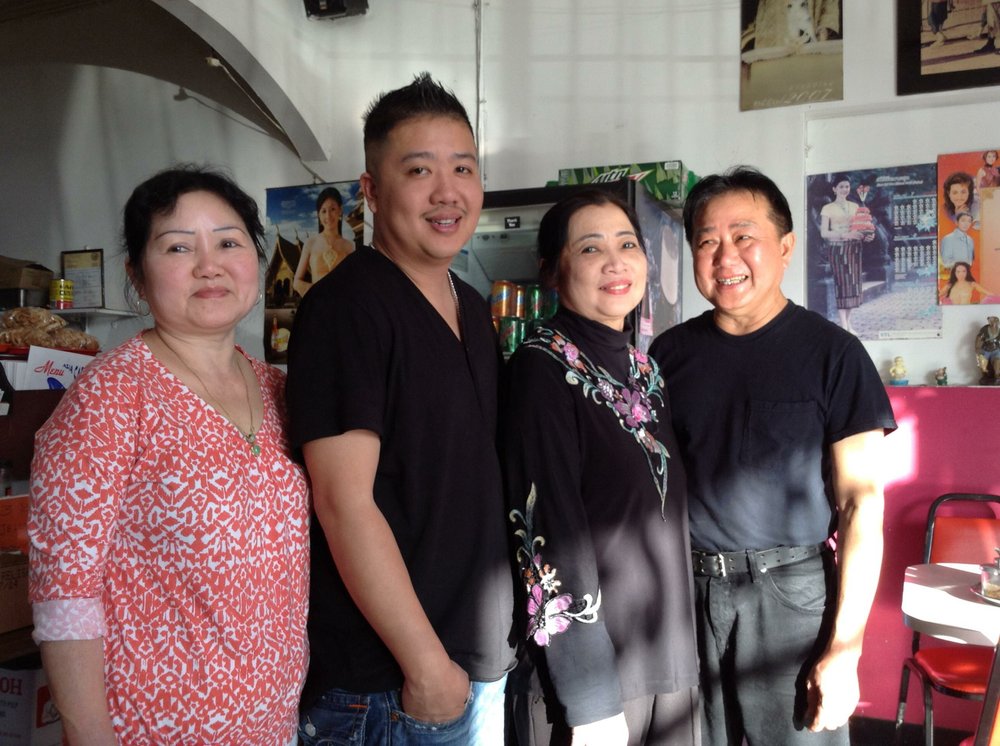 On the way through, at a moment when I'm breathing fire from the spices in the beef, plus the padaek, Robert suggests a coconut. "Try the jelly coco," he says. "It will cool you."

I nod. He gets a coconut out of the cooler cabinet ($3.50). Green shell has been chopped away, and the mouth at the top has been plugged with...a kind of solid, white jelly, looks like.

"Carol's secret recipe," says Robert. Carol's his wife. Whatever's in it, it tastes like coconut milk. You lever the jelly out of the insides and kinda chew it. It's like the perfect fire brigade. Now I can handle more of that hot beef. The traditional khao thip — rice basket — filled with sticky rice helps too.

All in all, quite an experience. Robert tells me how he and his family escaped from Laos in 1980, pretending they were going to a wedding across the Mekong river. Their family has stuck together. Robert, Carol, Johnny, and Robert's sister Kim all help run this place. "And there are more," says Robert. "I was the oldest of 13 children. They all came."

This place is the truth! Love the foods here. So seedy looking from without, but totally ono Lao/Thai/Viet grinds!