More Stuck in the Rough cash for Republican Faulconer 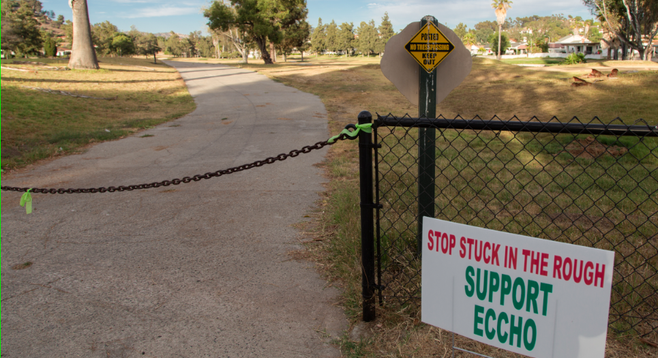 With election day less than five weeks away, campaign cash to both sides in the battle for San Diego mayor is gushing through a sometimes confusing and byzantine network of corporations, unions, and political committees.

Among the latest contributors: Stuck in the Rough, LLC, a Los Angeles based entity that has ruffled feathers in North County over its controversial plans to develop the Escondido Country Club into condominiums.

A disclosure filing yesterday with the city clerk's office shows that on Monday, January 6, the developer gave $50,500 to a GOP Lincoln Club independent expenditure committee calling itself “Working Together for Neighborhood Fairness in Opposition to David Alvarez for Mayor 2014.”

As reported here last week, $37,000 in previous donations to the Lincoln Club and the county Republican Party, which the groups reported as being made by Touchstone Golf, a Texas-based golf course management firm, were actually from Stuck in the Rough.

Touchstone chief Steve Harker, reached at his San Francisco Bay Area office by phone on December 30, said he didn’t know that Touchstone had been listed as making the contributions. He went on to say that his firm was not the source of the money.

After further investigation, Harker called back to say that the funds originated from an entity by the name of Stuck in the Rough, LLC, which, he explained, owns the Escondido Country Club and has had a management deal with Touchstone.

“They asked us to send out the checks from their account, and we did,” Harker said, referring to a checking account he said his firm maintained for the now-defunct golf course.

Harker said that Touchstone would take steps to correct the reports filed with the California secretary of state and San Diego city clerk’s offices. It is illegal to report false donor names on campaign disclosure filings.

Three days before Stuck in the Rough made its contribution, the Lincoln Club itself funneled $51,000 to the anti-Alvarez committee. In addition, La Jollan James S. Quinn of American Property Enterprises kicked in $4000.

According to the Lincoln Club’s filing, the committee spent a total of $31,548 on preparing mailers that are expected to be sent soon.

During the primary, the Lincoln Club became famous — notorious in some quarters — for dispatching a series of take-no-prisoners hit pieces against Republican-turned-Democrat Nathan Fletcher and his employer, cell-phone giant Qualcomm, founded by billionaire Obama-backer Irwin Jacobs.

The club is widely expected to unleash a similar series of attacks against Democratic city councilman Alvarez, who is running against GOP councilman Kevin Faulconer, the club's pick.

On the same day of the Lincoln Club donations, utility giant Sempra Energy gave $40,000 to the state Republican Party, according to a January 7 disclosure filing. In addition, the hotel lobby's San Diego Lodging Industry Association PAC gave $30,000. The next day, retail powerhouse Walmart Stores of Bentonville, Arkansas, kicked in with $25,000.

During the fall primary race, the state GOP paid for mailers backing Faulconer's campaign, according to disclosure reports.

Another SEIU affiliate, United Health Care Workers West PAC, had come up with $40,000 the previous day.

It's pretty clear how the sides are lining up in the San Diego mayoral race. Voters will have to choose between candidate Goliath Falconer backed by developers, business interests and Chamber of Commerce types and candidate David Alvarez backed by Labor interests and ordinary citizens in neighborhoods with commonplace problems, hopes and expectations.

In mayoral races last Fall, both Boston and New York elected populists who spoke to the concerns and needs of regular people. Is it a trend? We'll find out next month.

Right, monahan, "ordinary citizens in neighborhoods with . . . problems" will line up for Alvarez. Actually you may be right, and those citizens will be disappointed again. NEITHER candidate is for the citizenry. Each has a special-interest constituency with huge bucks to spend. By the time Alvarez would have taken care of all the public employee unions, there would be nothing left over. Faulconer will take care of his developers and the corporate welfare pigs, and when they are sated, again there will be nothing left over. Lose-lose is what this is called if you are an ordinary resident of the city.

This whole thing is going to be a huge duel of dollars from both sides. Much must be at stake here. The soul of the city?

As to why Stuck is giving money to Faulconer is a mystery. They have no dog in the San Diego fight as far as I can tell. He can't help them out in Escondido in the slightest. And they keep claiming that they are losing their shirts there and on that closed and dried-up golf course. Very puzzling.

The term "special interests" is as misleading as "welfare." Everyone has a "special" "interest" from the standpoint of someone else. I wish everyone would quit wasting ink/bandwidth repeating the phrase. That said, to characterize unions that represent San Diegans as being on the same level as a wealthy developer whose primary concern is his own enrichment is disingenuous at best. The mayor isn't empowered to "give away" any funds to either group, but to grow the union-wage voter base is far from a nefarious goal, as those people tend to spend it here rather than "invest" it elsewhere. I tend to look at members of an elite strata of society who export their cash to Wall Street banks or Cayman accounts as a far more "special" interest than the rest of us can afford to keep subsidizing.